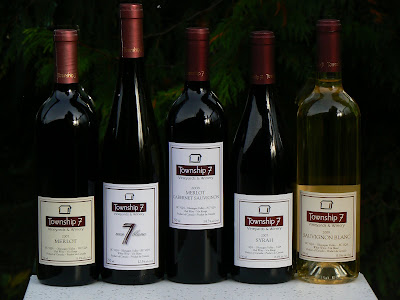 Township 7 Vineyards & Winery is the latest producer to join the trend to making white blends.

While wineries in France, for example, have made blends forever, New World wineries developed as producers of single varietals. In truth, many of these wines are not 100% pure. The rules usually require that the wine contain a minimum of 85% of the variety named on the label. Wines generally can be improved with some blending – whether it is 15% of a complementary variety or several clones of the same variety.

Credit for popularizing white blends in North America generally goes to a wine called Conundrum. It was created in 1989 by Caymus Winery in California. It became so popular that Caymus spun it off in 2001 as an independent brand.

The mystique surrounding that wine arises from the producer’s refusal to say exactly what is in the blend. We are told there are five white varieties: Sauvignon Blanc, Chardonnay, Muscat Canelli, and small amounts of Sémillon and Viognier. The exact blend is a secret – and it probably changes a bit each year. The result is an aromatic white with a fruity but reasonably dry finish.

These are all big, successful brands. It is not surprising that other wineries are following the trend, seeing that consumers are ready for interesting proprietary blends that will vary year from year. (The JoieFarm 2008 had six grapes in the blend.)

Township 7 is one of just two British Columbia wineries with multiple outlets. The original Township 7 opened in 2001 in Langley and its clone opened in 2004 in Penticton. (Church & State has a winery near Brentwood Bay and a new one just off Black Sage Road.)

Township 7 builds its release program around events at both wineries. And August release of three wines was combined with an open-air performance of Oscar Wilde’s The Importance of Being Earnest in the winery’s Naramata Road vineyard.

The most recent two releases were combined with a Hallowe’en Day grape stomp and costume party at the Langley winery.

And why not? The wine business should be fun.

Here are my notes on the wines.

Township 7 2009 7 Blanc ($18.99). The wine begins with an appealing aroma of spicy tangerine. On the palate, the fruit flavours are rich and abundant – citrus, pears, spice. The finish delivers a surprise: whereas the fruit leads you to expect a sweet finish, the wine is crisp and dry. As much as I like the wine, a little more residual sweetness would really pop the flavours and aromas. 89.

Township 7 2009 Sauvignon Blanc ($18.99). This is not the grassy Kiwi version but rather a cross between Fumé Blanc and Graves. There is smoky citrus and honeydew on the nose. The flavours include grape fruit and grapefruit rind and the structure has a flinty discipline. 87.

Township 7 Merlot 2007 ($N.A.). This 1,150-case wine is 92% Merlot, 8% Cabernet Sauvignon – a typical example of a winemaker tweaking a single variety with a dash of complementary fruit. This wine begins with aromas recalling spice cake. On the palate, there is bright fruit with flavours of vanilla, blueberry, cherry and even a hint of cranberry. 87.

Township 7 Merlot Cabernet Sauvignon 2008 ($19.99). The 587-case blend here is 68% Merlot, 30% Cabernet Sauvignon and 2% Cabernet Franc. Once again, lots of bright fruit flavours – cherry and black currant – and some vanilla, chocolate and liquorice. The tannins are ripe but firm enough to suggest that this wine will cellar well for another three or four years. 88-89.

Township 7 Syrah 2007 ($24.99). This wine won gold at the Northwest Wine Summit and silver at the recent B.C. wine awards. It is a classic, beginning with aromas of pepper and black cherry and continuing to flavours of pepper, plum, leather and earth. 90.
Posted by JohnSchreiner at Goodgrog at 4:54 PM