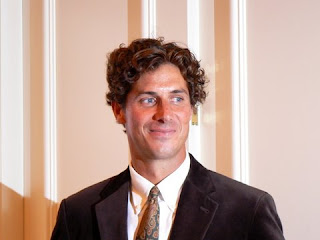 Burgundy varieties, notably Pinot Noir and Chardonnay, are the flagship wines at the Quails’ Gate Estate Winery in the Okanagan.

The reserve wines are called Stewart Family Reserve after the ownership. The winery is currently run by brothers Tony and Ben Stewart. In 1975, their father, Richard, planted Pinot Noir and seems to have been the first grower in British Columbia, if not Canada, to grow it successfully.

Today, this is the most important variety in the winery’s vineyard near Westbank. Quails’ Gate now grows seven clones on 40 acres. Pinot Noir makes up one-fifth of the winery’s total production.

Grant Stanley, the current winemaker, was hired in 2003 precisely for his experience making Pinot Noir with a leading New Zealand winery for six years.

“We hired Grant based on his interest in Pinot Noir,” Tony Stewart says. “If Grant had it his way, we would probably make only Pinot Noir. Not to say that he does not like making the other wines; he does, but his goal is the make the Pinot Noir as best as he can. The other wines make it possible for us to invest in the Pinot Noir program.”

Given that commitment to the variety, there is always a sense of excitement around the new releases from the winery. The 2007 reserve Pinot Noir and Chardonnay are just being released.

Stewart Family Reserve 2007 Pinot Noir: The average age of the Pinot Noir vines that produced this reserve wine is 24 years. The winemaker selected four clones (not identified in his notes) and then selected the best barrels after making four separate lots of Pinot Noir. The winery has released 2,948 six-bottle cases, at $45 a bottle.

That may be Oregon pricing but this wine will stand up well against some of Oregon’s best. It is a seductive wine, beginning with a rush of berry aromas in the glass. On the palate, there are flavours of strawberries and plums, subtly laid on good French oak. I did not find the chocolate that the winemaker reports in his notes; others may. The velvet texture adds to the wine’s seduction. This is a very elegant wine. I was surprised to see the winery recommending cellaring it five to eight years. Despite its charming delicacy, this wine’s power may be deceptive. 91 points.

Stewart Family Reserve 2007 Chardonnay: The winery has released 1,932 six-bottle cases of this wine at $29.99. The vines that produced this wine are 12 to 15 years old, clearly in their productive prime.

Again, the wine begins with appealing aromas of citrus framed by the delicate toastiness that comes from barrel fermentation in good French oak. It is a surprise to read that the wine completed full malolactic fermentation because it still presents lively, tangy acidity, giving the wine a refreshingly crisp finish. On the palate, the wine is rich, with abundant flavours of lemon and lime and subtle spice, likely from the barrels. This Chardonnay will develop additional character with a year or two of cellaring if you can keep your hands off it. 90 points.

Both of these wines reflect a good vintage but, even more so, the superlative farming at the Quails’ Gate estate vineyard. The winery’s regular Pinot Noir ($25) and Chardonnay ($19) wines are also very well made.
Posted by JohnSchreiner at Goodgrog at 10:31 AM No comments: 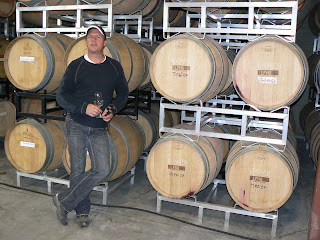 David Enns with barrels of Portfolio 2007

David and Cynthia Enns, the brainy couple who operate Laughing Stock Vineyards, are first out of the gate with a creative incentive to launch this season’s Futures program for Portfolio, their flagship wine.

They will release their 2007 Portfolio this fall at $39 a bottle. However, a portion of that wine is available, beginning February 17, for $35 a bottle to customers prepared to pay for it now.

Laughing Stock has offered Futures on Portfolio since it began releasing the wine several years go.

There’s an added twist this year: if the Toronto Stock Exchange index keeps tanking, you might get the wine for as little as $28 a bottle. “We recognize that many of our wine clients are feeling the effects of the market downturn,” Cynthia says in her news release. “We wanted to let them know that we feel their pain.”

Here is how David and Cynthia are structuring this year’s offering:

* The offer, first of all, applies only to the buyers of the first 300 cases. There is, as Cynthia puts it in her news release, a “limit to every economic stimulus package.”

* The winery registers the TSX index on the day your order (and cheque) is received. Then for every 500 points that the index drops between then and the September 2009 release date, your purchase price drops by $1 a bottle. The maximum reduction is $7 a bottle; the wine would cost you only $28.

* If the market continues to slide between now and when the wine is released, David and Cynthia will send customers a so-called “economic stimulus cheque” to reflect the additional discount. (Or the money can be donated to a charity.)

In their prior careers, David and Cynthia ran a financial consulting company that advised companies involved with the stock market. When they opened their Naramata Bench winery in 2005, they called it Laughing Stock as a playful reference to how their financial peers would regard them if the winery failed. So far, the winery is thriving.

In addition to using market names for their wines (Portfolio, Blind Trust are examples), they have incorporated stock references on labels. The Portfolio label is a ticker tape wrapped around the bottle, with the symbols and prices of various shares on the day when the grapes were picked.

Portfolio is an award-winning blend that now incorporates all five of the Bordeaux red varieties. The quality justifies the price.
Posted by JohnSchreiner at Goodgrog at 11:00 AM No comments: 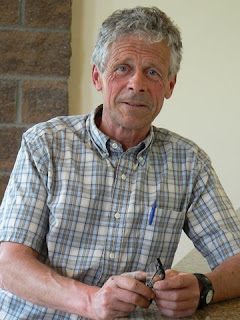 This week, I heard a report of a noticeable jump in the price of a few wines sold in the province’s 20 VQA stores.

This report seems inaccurate. But what is accurate is that some of the large VQA wineries not members of the British Columbia Wine Institute are reducing the number of wines made available in VQA stores. Domaine de Chaberton of Langley, for example, will not replenish VQA store stocks on its value-priced wines.

What is behind this is the decision to the Institute to impose a surcharge on non-Institute members for using the VQA store distribution channel. This may well signal the end of the prickly truce between those wineries that belong to the Institute and those that put their wines through the VQA tasting process but do not belong to the BCWI.

Many of the latter belong to the Association of British Columbia Winegrowers. Early in January, Blue Mountain proprietor Ian Mavety, the current president of the ABCW, sent an angry letter on this issue to several cabinet ministers in Victoria. To date, none has replied.

The VQA store licenses technically are controlled by the BCWI. These stores are limited to sell only VQA wines produced in British Columbia. For most of the past two decades, the wineries that put their wines through the VQA tasting panels all belonged to the BCWI. A portion of the revenue these wine sales generate is retained by the BCWI and helps pay for its marketing and promotional activities.

Until last year, BCWI also managed the VQA process. To be permitted to display the VQA symbol on a wine, the wine must be made with grapes grown in British Columbia; and it must be certified free of technical faults by a professional tasting panel which meets more or less monthly.

The VQA regulation has now been taken over by the new British Columbia Wine Authority.

The rules that set up the BCWA require all wineries that have started since January 1, 2007, to submit their wines to the VQA panels.

Wineries that started earlier than that, like Blue Mountain Vineyard and Cellars, need not get VQA approval for now. However, in 2020, every winery will be required to VQA its wines if it wants to use British Columbia geographical indicators on its label.

Most wineries now belong to the Institute, which has a global marketing role. However, that membership is voluntary. Member wineries pay 10 cents for every litre they make annually to belong. Such large producers as Domaine de Chaberton and Blasted Church have recently withdrawn, content to look after marketing by themselves - particularily now that they also have to pay annual fees to the BCWA.

When the BCWA was being set up a few years ago, the acting chair decided that the VQA stores should be allowed to sell all VQA wines, whether or not the winery was a member of the Wine Institute.

Last year, the board of the Wine Institute decided that non-member wineries were getting a free ride by being allowed to sell through VQA stores on the same terms as member wineries.

Member wineries have been offering their wines to the stores at a 30 percent discount to the retail price. The Institute decided that non-member wineries would have to offer a 36 percent discount. The six percent surcharge in effect is what it costs them extra to use the VQA stores unless they become members of the Institute. The change became effective on February 1.

In his letter, Mavety called the surcharge “extortion plain and simple.”

He argued that the institute has decided that “if they cannot get wineries to join the association voluntarily, they will compel them to join or suffer hardship by being denied access to” the VQA stores. He also asked that “if they can add a surcharge today of 6% what stops them from adding a further 20 or 30% next month or next year.”

There is some logic on what the Institute has done, although one would hardly see it as an effective tool for recruiting new members. (Member wineries pay 10 cents a litre to belong to the Institute.)

The surcharge has re-awakened the small winery paranoia that the giants in the Canadian wine industry – Vincor and Andrew Peller Ltd. – once again are out to squash small wineries. “It would appear,” Mavety argued, “that the large firms, particularly those owned and operated outside of the province are dictating this change and are attempting to further constrain trade.”

Whether or not one agrees with that position, it would surprise me if the government lifts a finger. The internal wrangling of the British Columbia wine industry over the last five years has left ministers and bureaucrats with no appetite to get back in the middle.

Posted by JohnSchreiner at Goodgrog at 2:56 PM No comments: