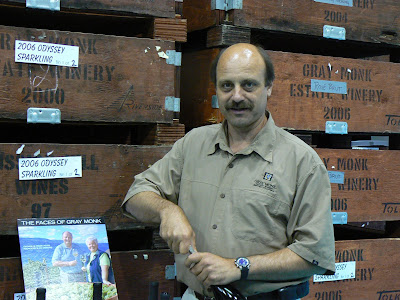 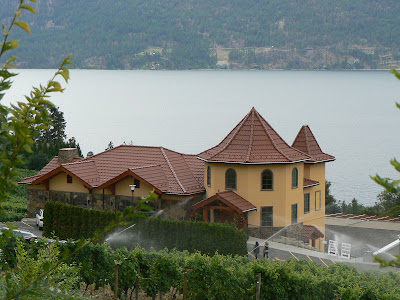 Today is the 25th anniversary of George Heiss Jr's career as the winemaker with family-owned Gray Monk Estate Winery.

That makes him the one of the longest-tenured winemakers in the Okanagan.

Calona is a sister winery to Sandhill and Howard is the master wnemaker overseeing Calona, Peller Estates and Red Rooster as well as Sandhill. Walter and his younger brother, Gordon, operate the Gehringer Brothers winery which opened in 1986.

At Gray Monk, George (in photo above) and associate winemaker Roger Wong are preparing for the 2009 vintage in a winery that has just completed its latest expansion, adding a much larger tasting room, a floor of new offices for the staff (including the winemakers) and more room in the cellar. As well, the cosmetic changes to this popular north Okanagan winery give it a grand European appearance (see above).

Gray Monk, which opened in 1982, was founded by the winemaker's parents: Austrian-born George Heiss Sr. and his German-born wife, Trudy. In 1976, they were among the first - perhaps the first Okanagan growers - to import Pinot Gris, Auxerrois and Gewürztraminer vines to the Okanagan from an Alsace nursery. These remain some of Gray Monk's most important varieties. Today, however, the winery, either from family-owned vineyards or from contract growers, produces one of the largest portfolios of any BC producer.

The winery's initial vintages were made primarily by consultant Lynn Stark because George Jr. was still at wine school in Weinsberg in Germany.

Born in 1962 in Edmonton, George Jr. was sent to Germany at 18 to learn winemaking. He apprenticed with the Louis Guntrum winery at Nierstein before taking his professional courses at Weinsberg. He graduated in 1984, returning to his family's winery that summer.

The German training was appropriate for the varieties then dominating Gray Monk's portfolio. For many years, Gray Monk's white wines took a disproportionate number of gold medals each year at the Okanagan Wine Festival competitions.

Gray Monk was primarily a white wine house until the early 1990s. The first red wines, added to the portfolio at that time, were made without barrel-aging. George Sr. used to say that if people wanted wood, they should chew a 2x4.

That is no longer the case. The winery now has a barrel cellar to make reds that compete with those from peer wineries. As well, the winery in recent years has begun to make some excellent sparkling wines in the traditional method of Champagne, reflecting one of Roger Wong's skills.

Gray Monk is one of the few Canadian wineries that can boast of having four generations involved, counting Trudy's late father, Hugo Peter. He was the first member of the family to plant grapes in the Okanagan. In fact, Hugo went to Europe to source the vines that were imported from Alsace.

Today, George Sr. and Trudy continue as Gray Monk's ambassadors at large, having brought their entire family into management. Robert Heiss, the eldest of the three Heiss brothers, is Gray Monk's general manager while Stephen, youngest of the three, looks after marketing and information technology. One of Robert's sons is involved in viticulture. All the brothers operate vineyards.

Gray Monk's expanded winery is just the latest of the many additions that been completed since the winery first opened. The original winery nestled discreetly on the slope, surrounded by vineyards. The handsome facility just opening is anything but discreet as Gray Monk, now making 80,000 cases a year, scrambles to accommodate the thousands who visit the winery every year.

With a fine year-round restaurant, Gray Monk has become a destination Okanagan winery. Happily, it has managed to do so without losing the warm personality of the Heiss family.

My favourite wines at Gray Monk include:

Odyssey Merlot 2006 ($23.99) All of Gray Monk's reserve wines are released under the Odyssey label. This is a rich, full-bodied Merlot, with concentrated fruit - flavours of currants, blackberries, liquorice - and long ripe tannins. 90

Odyssey Pinot Noir 2006 ($26.99) A single-vineyard Pinot Noir, this is grown by Bill Collings in Okanagan Falls. The wine is firm in texture (suggesting ageability) with flavours of cherries and chocolate. 88

Odyssey White Brut 2006 ($26.99) This is a delicious and complex dry sparkling with with crisp notes of citrus but also with a creamy texture. The wine is based on Riesling, Chardonnay Musque and a touch of Pinot Noir. 88

Odyssey Rosé Brut NV ($26.99) This is a refreshing and festive wine, with delicate fruit flavours and a slightly off-dry finish. 88

Odyssey III ($19.99 for 500 ml) This is a port-style wine with delicious flavours of chocolate, red berries and liquorice. 88

Pinot Gris 2008 ($17.99)The winery's signature wine, this presents a big palate of ripe pear flavours with a touch of spice and grapefruit on the finish. 88

Chardonnay Unwooded 2008 ($16.99) Gray Monk was one of the first Okanagan wineries to recognize the virtues of Chardonnay without wood flavours. This is a refreshing white with notes of citrus on the nose and the palate. 88

Gewürztraminer 2008 ($16.99)This is a classic expression of the variety, beginning with spicy aromas. On the palate, there are layers of fruit, including grapefruit and lychee, with spice on the finish. 88

Latitude 50 Rosé 2007 ($13.99 - $11.99 currently in the wine shop) The winery's Latitude 50 series - red, white and pink - offer great value, one reason why they constitute half of the winery's production. The pink one is especially delicious, with its cherry flavours and its crisp, refreshing finish. 88
Posted by JohnSchreiner at Goodgrog at 11:22 AM No comments: 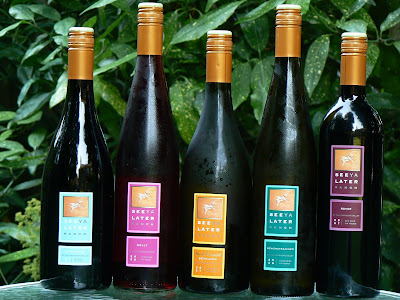 Shortly after Vincor Canada took over Hawthorne Mountain Vineyards in 2000, I suggested to one of its senior officers that the winery’s unusual dog legacy presented a good marketing opportunity.

It took Vincor several years to take up this idea – probably not until one of their own marketers had conceived the idea independently and passed it through a focus group or two. Big companies do not go out on a limb without research.

Subsequently, the wine group has plunged in with considerable enthusiasm. There are four dogs memorialized on the labels of current releases.

This is the background. This Okanagan Falls winery is on property owned for over 40 years by Major Hugh Fraser, who died in 1970. A pet enthusiast – he was president of the Penticton chapter of the Society for Prevention of Cruelty to Animals – he owned at least 12 different digs in succession. He buried the dogs under headstones which can now be viewed in a circle under a tree outside the winery’s tasting room.

Several years ago, Hawthorne Mountain created a premium label, See Ya Later Ranch, and that in time has become the name for the winery as well.

The legend is that the major’s British bride returned to Britain in the 1920s, leaving a note saying “See ya later.” The more likely story is that the major scrawled See ya later at the conclusion of his letters; and he was a prolific correspondent.

The SYL labels included the image of a cute white dog with wings, flying, presumably, to whatever heavens dogs go to. Then the winemaker, reacting to all the dog lovers in the world, began crafting wines which carry the names of several of the major’s dogs.

The first was an excellent red Meritage blend called Ping. The next was a terrific white blend (Chardonnay, Pinot Gris and Sémillon, called Jimmy My Pal.

The latest releases recall two more of the major’s dogs: Rover and Nelly.

This winery doesn’t just talk the talk when it comes to welcoming dog owners and their pets. Dogs are definitely welcome at See Ya Later Ranch, one of the few Okanagan wineries with water accessible to pets.

Here are notes on the current releases:

See Ya Later Gewürztraminer 2008 ($16.99). This wine, available in the Liquor Distribution Branch as well as private stores, has just won a Lieutenant Governor’s Award of Excellence. It begins with appealing aromas of spice and grapefruit, continues on to juicy flavours of pink grapefruit. The spicy Muscat bite on the finish and the refreshing acidity define the elegant structure. 90

See Ya Later Barrel-fermented Sémillon 2007 ($22.99). This rich, mouth-filling wine is available only in private stores. The wine, beginning with citrus aromas, has layers of flavour – tangerine, orange peel, butter and oak. 89

See Ya Later Nelly 2008 ($16.99). This rosé, widely available, is an unusual blend of Gamay, Cabernet Franc and Gewürztraminer. The wine’s deep hue, almost as dark as a red wines, comes from a prolonged cold soak of the juice on the skins of the red varieties. The aroma and the flavours suggest a bowl full of cherries and strawberries. Unfortunately, the acid is too low and the alcohol is too high (14%), costing the wine that refreshing character one wants with rosé. 85

See Ya Later Pinot Noir 2007 ($22). This is a big, robust wine, with good colour, with aromas of cherries and spice and with flavours of black cherries, mocha and vanilla. It is limited to private wine stores. 88

See Ya Later Rover 2007 ($24.99). This wine is available in both the LDB and private stores. It is Shiraz, with five percent Viognier, and has been aged 18 months in oak (French and American) before it was bottled. This is an appealing wine with ripe, long tannins and spicy flavours of juicy black cherries. 88
Posted by JohnSchreiner at Goodgrog at 1:17 PM No comments: