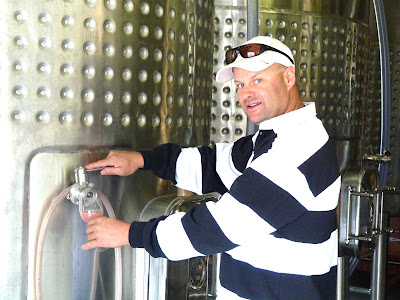 The two red wines just released by Young & Wyse Collection proprietor Stephen Wyse are among the first 2010 reds in the market. They are a sign of good things to come from that vintage.

Much like 2011, the 2010 vintage started late, suffered cool growing conditions for much of the spring and summer and then was saved by a long, warm and dry autumn. To quote this winery: “An October heat wave rounded the vintage out beautifully and brought everything together for a fantastic harvest.”

Those growers that reduced the crop load early, so that the remaining grapes ripened, made surprisingly good wines. Judging from the taste of the Merlot and the Cabernet Sauvignon from Young & Wyse, there was impeccable viticulture in the winery’s 10-acre Osoyoos vineyard and in that of its growers.

This boutique winery, a stone’s throw from the Osoyoos border crossing, was opened two years ago by Michelle Young and her partner, Stephen Wyse.

His surname is familiar in British Columbia wine circles. Jim Wyse, his father, started the Burrowing Owl Winery; Stephen’s brother, Chris, and his sister, Kerri, now handle much of the management at Burrowing Owl.

Stephen, who once trained as an airline pilot, got into wine as part of the construction crew that built Burrowing Owl. Then he spent a number of years in the cellar there, including three as winemaker, before he and Michelle decided to strike out on their own.

Very quickly, they have reached a production of about 4,000 cases a year, supported by contracts with several Osoyoos growers and by rising production from their young vines. The Young & Wyse vineyard grows Gewürztraminer, Pinot Gris, Viognier, Cabernet Sauvignon and Zinfandel, with just a little Malbec. (Frost damage a few years ago decimated Stephen’s Malbec, sadly.)

The winery has the volume to make its wines available widely in VQA and other wines stores, as well as in restaurants, and at reasonable price points.

Here are notes on the two current releases.

Young & Wyse Collection Merlot 2010 ($19.90 for a production of 1,400 cases). The wine still has the firmness one expects of a young wine; decant it if you don’t have the patience to cellar it. The wine begins with spice and berry aromas (raspberry, blueberry, cherry). On the palate, the wine has good concentration with flavours of plum and black currant, with a long finish. 89.

Young & Wyse Collection Cabernet Sauvignon 2010 ($26.90 for a production of 1,848 cases). This is a late-ripening variety but the grapes were fully ripe when picked at the very end of October and into the first few days of November, yielding a wine with 13.3% alcohol. The aromas begin with an intriguing note of spearmint (to the expected in an Okanagan Cabernet), along with nutmeg and red fruit. On the palate, there are flavours of black currant, blueberry and blackberry. The texture is concentrated with ripe tannins. Even though the wine is drinking well, it will definitely reward anyone who cellars it for about five years. 90
Posted by JohnSchreiner at Goodgrog at 12:54 PM No comments: 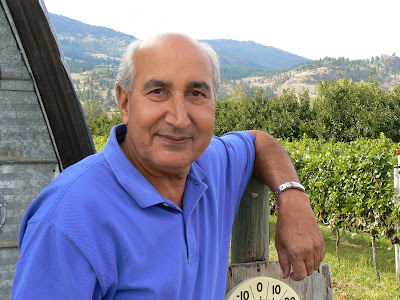 The British Columbia wine industry has lost a remarkable gentleman with the passing of Devindar (Dave) Dhillon, the founder of Chandra Estate Winery in Oliver.

Dave, who opened the winery in 2oo8, died of cancer on November 26.

He had one of the more improbable backgrounds among the many who have started wineries in the Okanagan: he had a 30-year career in the Canadian penal system and had risen to senior posts before retiring. He bought a vineyard and started a winery when he grew bored of retirement.

Most of us who met this elegant and sweet-tempered man had difficulty imagining that he was once a prison warden. He got into that career by chance, as he told me in a charming interview in 2006.

He was born in India in 1939 and migrated to North America, via Kenya, to teach. After substitute teaching in California, he lined up a teaching job in British Columbia – but the immigration paperwork took so long that the job was gone by the time he arrived.

Here, in his words, is what happened next.

“This is a true story. The British Columbia Penitentiary in New Westminster, an old traditional place, advertised at time for security officers and correctional officers. I thought that is a big thing, officer. From my background in India, officer means something. So I applied without understanding what that really meant.

“And the fellow called – who became a very good friend of mine – and said, ‘Do you understand what you are applying for?’ I said, ‘To be honest, no. I’m looking for a job.’ He said: ‘Your qualifications look really interesting. Why don’t you come over and we’ll explain what this job is.’

“So I went there and he explained it to me. That was not my suit. [But] I said I need a job, so I want to do it. In the next three, four days, a vacancy came up in counselling. He said, ‘How about that?’ I asked him, ‘More money or less’, because you need money when you come to a new land. He said: ‘I think it is more money and it is in your area of training.’

“So we were preparing for that when a job came up in Prince Alberta as a teacher in corrections. He said, ‘Hey, you have a teaching degree. Would you like to do that?’

“He said it is very cold in Prince Alberta. When I want there, it was 51 below, with the wind chill. It was February 14, the day I started. 1966. … I became school principal in the Penitentiary after three years.”

He earned additional degrees, did postgraduate work in counselling at the University of Saskatchewan, and moved up in the corrections service, ultimately to regional director general for the Prairies. He eased into his retirement in 1996 with two years running the Ferndale minimum security institution in the Fraser Valley.

He tired of travelling and of consulting by 2005 and decided to buy a vineyard. “The whole field of the wine industry is very challenging,” he told me. “That’s the kind of thing I like. I thought it can’t be any more complex than inmate behaviour.”

Because the vineyard and winery were organic, he wanted to call it Ecovitis until his family – he has two daughters and a son – said that sounded like dishwater detergent. With his good nature, Dave shrugged off the critique and agreed with the family’s name – Chandra, a Hindi word for moon. Many of Chandra’s wines had names alluding to the moon.

His mentor in viticulture and winemaking has been Karnail Singh Sidhu, the owner of Kalala Organic Estate Winery in West Kelowna. Karnail helped manage the vineyard and winery after Dave became ill.

The Dhillon family has not yet made a decision on the future of Chandra.
Posted by JohnSchreiner at Goodgrog at 10:53 AM 1 comment: