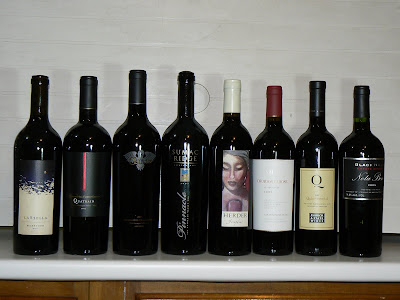 Because several wineries this year released their icon Bordeaux reds around the same time, I assembled nine of these stars for a blind tasting by myself and three wine-loving associates.

With the possible exception of Nota Bene, these wines are all available from the wineries and in most VQA wine shops. Nota Bene was released in the spring. However, the Black Hills winery kept some back for sale at the winery (one per customer) during the wine touring season and at $60 a bottle. The wine was included in this tasting because it has such a cult following. We wanted to see how it stacked up against other icons (pretty well).

This is not an exhaustive list of B.C.’s icons; no Pinot Noirs were included, for example, because this was not meant to be a Pinot Noir tasting. As well, at these price points, there is an economic reality. Some of the wines were samples from the wineries but others had to be purchased.

Because the wines were all reasonably young, every bottle was decanted and then returned immediately to the original bottle. The point was to let the wines breath a little and open up.

Consumers need not be in a rush to open any of these wines. They all have the structure to improve in the cellar for at least the next five years.

Ideally, icon wines should score 90 points or better. Most of these did and the rest were close enough that time in the bottle just might lift them as well. These are all delicious wines that collectors seek out.

They are reviewed here in order of price, with such additional information as the wineries have made available. Surprisingly, a few wineries don’t bother to break out the percentages of each variety in the blend. I would suggest that a buyer of an icon wine wants to know that, especially those who collect vintage after vintage. To its credit, Osoyoos Larose puts the detail right on its front label.

Note that Merlot is often the backbone of a blend. This is not just because Merlot is the most widely planted variety in the Okanagan and Similkameen valleys. The terroir there produces Merlot that has structure and firm ripe tannins, a good building block for a red blend.

This is the flagship red blend from Herder Winery. This just-released vintage has a slightly raw, youthful edge, with firm tannins, suggesting the wine will benefit from aging in the bottle. The aroma has a note of vanilla and mocha; as it opens in the glass, there are floral aromas as well as dried fruit aromas. The flavour displays vibrant red currant hints. 87 and age-worthy.
A re-taste of the second half of the bottle two days later confirmed how aging will help. The wine had rounded out and developed a graceful elegance. Now it scored 89 points and rising.

Dark in colour, this wine begins with aromas of mint and sweet fruit. This follows through on the palate, where the mint (a Cabernet Sauvignon fingerprint) gives the flavours a brightness and an attractive lift. The oak is well integrated. 90

The French winemaking touch shows here in this elegant and layered wine, with its flavours of plum and cedar. The tannins are firm but ripe, giving this generous wine the classic structure for aging. Le Grand Vin tastes good now but should keep improving at least to its 10th birthday. 90

This is one the three wines in what Mission Hill calls its Legacy series (with Oculus and an elegant Chardonnay called Perpetua). The Syrah gives substance and depth to this full-bodied wine. Dark in colour, it develops attractive berry aromas in the glass. There are flavours of currants and black cherries, with a robust hint of earthiness. 90

Church & State owner Kim Pullen says he searched about a year for a good name for this new icon blend. Not making much progress, he asked his teenage daughter for an idea. Within minutes, she came up with Quintessential. (Eat your heart out, Bernie Hadley-Beauregard!). The wine begins with a wonderful aroma of mocha and fruit cake, shows flavours of cassis and blackberry and a hint of liquorice on the finish. A real charmer. 91

The debut 1997 Pinnacle was released in 2000 and was British Columbia’s first $50 red blend. The early vintages were slow sellers. That was not a reflection on the wine but rather on how hard it was get consumers to pay the price before the industry caught up with Sumac Ridge. As usual with Pinnacle, this is a bold wine with a brooding dark hue. This wine spends more time in barrel than any other icon; there is vanilla on the nose and sweet oak flavours. It takes a while for the fruit flavours to take over in the glass. When they do, there is dark chocolate, cherries, plums and even sweet tobacco, with layers of flavour. 90+

This is a new wine from Noble Ridge, just released on December 1. The wine begins with aromas of red liquorice, spice, vanilla and oak. At this stage in the wine’s life, the firm oak tannins are restraining the fruit flavours and giving the wine a somewhat dry finish. Either decant this or give it another year or two in the cellar to enable the fruit and oak to knit. 87

This is Mission Hill’s flagship wine and is priced accordingly. No holds are barred in making this wine: the best grapes are selected during two passes over sorting tables, fermented in expensive oak vats and aged in expensive barrels. When it comes to blending, Michel Rolland, the super-consultant from Bordeaux, lends his well-travelled palate. This wine took a little time to open up in the glass but when it did, it showed aromas of red berries and cigar box; and layers of flavour, including spice and chocolate. This is a richly elegant and very polished wine. 94

The Lastella winery opened this summer on a vineyard at the north end of Osoyoos Lake (the winery actually has 400 feet of water frontage). It is a sister to the Le Vieux Pin winery near Oliver. Both wineries practice extreme viticulture, producing fruit that yields wines of immense concentration. The model seems to be Harlan Estates or the big reds made by Helen Turley in California. Maestoso is a classic example, a huge wine with sweet, almost porty flavours. The wine is so rich that one does not notice the alcohol. As the score shows, this wine caused controversy at the tasting precisely because it is so over the top and so totally sensual. 87-92
A retasting of the second half of the bottle two days later showed that the wine had become more generous in structure; and delicious flavours of blackberry and plum jam had begun to emerge. This is an easy wine to like, even if contentious in the original tasting.

Posted by JohnSchreiner at Goodgrog at 12:46 PM 2 comments: 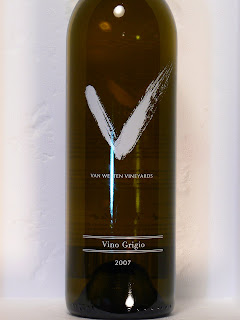 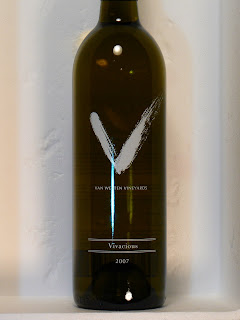 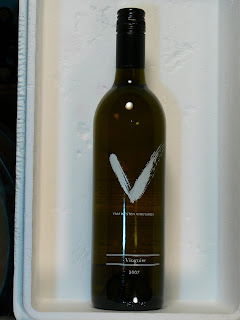 Robert Van Westen’s wine releases are out of synch with his peers. Most other wineries tend to release their white wines in spring. Robert, the co-owner and winemaker at Van Westen Vineyards, waits until late fall – when most of the competing good whites have disappeared from wine store shelves.

He has now released his three 2007 whites. What a triumph in winemaking they represent. The only complaint is that the quantities are limited; buyers need to move quickly to find these wines before they, too, have disappeared from wine stores and restaurant lists.

There are the best white wines so far from this small Naramata Bench winery, which has been open three years now.

Next year, Rob and Tammi, his wife, will be opening the winery’s first tasting room, making it easier to find the wines. A word of warning: call ahead because the tasting room is likely to be open only n Tuesdays and Saturdays.

Vino Grigio 2007 ($18.90) was released November 1. This Pinot Gris, of which 333 cases were made, is aptly named because its exuberantly fruity style mirrors what Pinot Grigio should be: a fresh, tank-fermented white that sets out to be delicious, not complex. The aromas show lemon zest and citrus notes. On the palate, there are flavours of ripe pears and more citrus. There is a fine skein of minerality and acidity to give this wine a crisp backbone. The finish is refreshing and very long. 92

Vivacious 2007 ($18.90) was also released November 1, with a production of 230 cases. This is Van Westen’s ingenuous take on giving complexity and a fruity lift to sometimes bland Pinot Blanc by barrel-fermenting some of wine and by adding four percent of Pinot Gris to the blend. This is a big, generous white with flavours of apple and melon. The time that the barrel-fermented wine spent on the lees shows through in the rich texture of the wine on the mouth. But the good acidity gives the wine a clean, tangy finish. 90

Viognier 2007 ($24.90) was released December 1 and the release is only 101 cases. This is emerging as the Van Westen flagship white. It is an explosion of tropical aromas and flavours – apricots, citrus, peaches – with an appealing aroma of grapefruit. There are layers of taste in this wine; it opens like a flower in the grass as it warms up, but it has good acidity to give it a crisp, tangy finish. 92
Posted by JohnSchreiner at Goodgrog at 3:20 PM 2 comments: 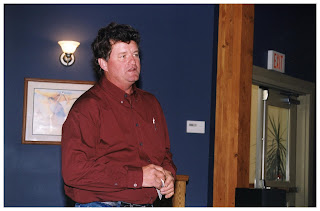 
Fans of Bill Eggert and Fairview Cellars will be surprised, and probably delighted, to hear that in the 2008 vintage, he purchased enough Pinot Noir grapes to make “a couple of barrels of Pinot Noir as an experiment.”

Since opening Fairview Cellars in 2000, Bill has made his reputation primarily with the Bordeaux reds – Cabernet Sauvignon, Cabernet Franc and Merlot – with a little bit of Syrah and Sauvignon Blanc.

There was a very simple reason why he made those wines. “I am only a Cab man because that is what grows well on the property I have,” he says. His 2.4-hectare vineyard is on a sunny promontory at the start of The Golden Mile, not far from Oliver.

Why Pinot Noir? Bill recently has purchased two blocks of land, totaling 2.6 hectares, on the plateau south of Vaseux Lake. Here he intends to plant Pinot Noir, a variety already growing successfully in a nearby vineyard. It is, he says, “one of my recommendations to anyone planting grapes is to see what the neighbours are doing.”

He will begin by planting next year perhaps half a hectare as he feels out the property, which he describes as “very difficult terrain with all the large boulders, so I don't want to go overboard until I have it figured out.”

This is quite a different site from his current vineyard, likely more appropriate for Pinot Noir. “There are bluffs blocking the early and late sun, and reducing the heat units,” Bill says. “I have always believed one should plant the grape that is suited to the terroir.”

“I figured I better get some experience with the grape,” he adds, explaining why he made his first Pinot Noir this vintage. “I don't know if I will release this wine, or hold it until I have some from my own grapes.

If he does release this wine, look for it in about 18 months.

Posted by JohnSchreiner at Goodgrog at 3:00 PM No comments: