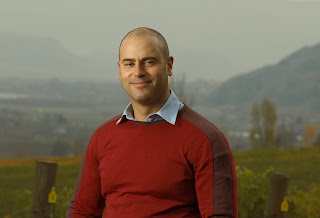 Michael Bartier’s decision to launch his own winery in partnership with his oilpatch brother, Donald, is triggering a winemaker change at Road 13 Vineyards.

The Bartier winery, yet to be named, will be built on a small Gewürztraminer vineyard near Summerland planted two years ago by Donald Bartier, who is a land man for a Calgary oil company.

There is already a Bartier red blend in barrel and a white blend in tank. Michael, who is not disclosing the components of the two blends, expects no wine will be released before late winter or early spring of 2012.

Michael, who also wants to secure a source of grapes in the south Okanagan, is not aiming to build another winery to the size of Road 13 (which makes up to 20,000 cases a year).

“I want to go with two wines, maybe three,” Michael says. “I have no plans beyond two at the moment. The cash flow plan I have set out over the next 10 years maxes out at 5,000 cases. It is quite small. I want to make it myself.”

He is handing Road 13 over to J-M (Jean-Martin) Bouchard. A Montreal native, he was the winemaker at Ontario’s Hidden Bench Winery near Jordan until he moved to the Okanagan early in 2010. Here, he worked with Donald Triggs, the former co-founder of Jackson-Triggs, at Arise Vineyards, the new Golden Mile winery that Triggs is developing.

“I have tasted a few of his wines from Ontario,” Michael says. “To a wine, they are exceptional. I feel pretty good by sending [Road 13] on to him.”

At Road 13, J-M takes over an established producer with a leading brand. Under Michael’s winemaking, Road 13 had begun to emphasize blends over varietals in much of its portfolio, although its reserve Jackpot range continues to include major varietals such as Pinot Noir, Syrah and Riesling.

J-M has had a remarkable and diverse career, starting with a bachelor of business administration degree in the early 1900s from the University of Québec and later a wine science degree from Charles Sturt University in Australia.

He came to wine through the hospitality industry – assistant manager of the Jardin Nelson Hotel in Montreal from 1994 to 1997; food and beverage supervisor in 1998 at a Holiday Inn in Perth and then two years as the manager of the Blue Waters Lodge in Western Australia.

He worked as assistant red winemaker at Penfolds in the Barossa Valley in 2003 before coming to the Okanagan’s Sumac Ridge as assistant winemaker. He moved to Ontario in 2005 to help establish Hidden Bench Vineyards. That winery came out of the gate so fast that, in the 2007 Canadian Wine Awards, it was runner up as best winery. The Hidden Bench Riesling was judged the best Riesling and the White Meritage as the best white wine in those 2007 awards.

In the Decanter awards in 2010, Hidden Bench’s 2007 Red Meritage won the trophy as the best Canadian red wine.

Road 13 appears to have landed a very capable winemaker to replace the very capable Michael Bartier, who also did not start out as a winemaker.

“Like a lot of careers, I got into this quite by accident,” Michael says. “I feel really privileged. I was at the right place at the right time. I can’t see anyone now coming into the wine industry as wet behind the ears as I was, and rising so fast.” 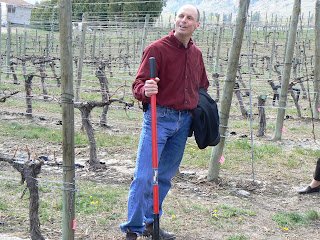 The son of an accountant, Michael was born in Kelowna in 1967 and grew up in Summerland. He has a degree from the University of Victoria in recreational administration. On graduating in 1990, he took a job with a wine marketing agency. “I wasn’t interested in the recreational field,” he says now. “By the time I realized that, I was too far along in my degree to stop those studies.”

At the wine agency, he got to visit wineries in France and in the United States. “It gave me the interest and the passion for wine,” Michael remembers.

He left the agency in 1995 to return to the Okanagan, intending to pick up his original interest in the outdoors. “My dream was to become a professional climbing guide. I came out to the Okanagan to boost my résumé on difficult climbing routes.” Those include the Skaha Bluffs just south of Penticton, one of the world’s more challenging rock climbing venues. Ultimately, Michael decided this was definitely not for him. While he considered himself a capable ice climber and mountaineer, he concluded he was “a mediocre rock climber.”

While working on his climbing skills, Michael took a job as a cellar hand at Hawthorne Mountain Vineyards (now See Ya Later Ranch). By the end of a season, he had been promoted to assistant winemaker, leading him to abandon professional climbing. “I realized it was just too dangerous an occupation,” he says. “And I was having too much fun in the wine cellar.”

He left Hawthorne Mountain in 2001 because he wanted to develop his own label; Vincor International Inc., which owned Hawthorne Mountain, does not permit its winemakers to freelance on the side. Michael had no problem with that policy. “Vincor is an outstanding employer that treats its people very well,” he says. “I had just been there a long time. I always knew I wanted to do my own winery.”

As first step, he became a consulting winemaker for various Okanagan wineries, including Stag’s Hollow for the 2002 vintage. He was the winemaker for Township 7 from this winery’s inception in 2001 until he left to join Road 13 in December 2004.

“A winemaker can really put his fingerprint on Chardonnay,” Michael says. As a consultant, he made the initial Chardonnays for Meyer Family Vineyards and the wines that launched Noble Ridge. After he finishes at Road 13 in January, he will resume his consulting career (with Haywire and Stoneboat Vineyards, among others) while developing the new Bartier winery.
Posted by JohnSchreiner at Goodgrog at 4:28 PM