Summerhill blows its horn with Gabriel 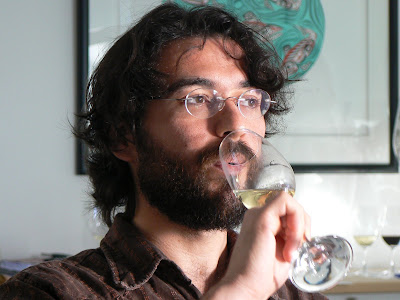 A recent tasting of current releases from Summerhill Pyramid Winery ended up with a round of chocolate cupcakes – to celebrate the birthday of Ezra Cipes, the general manager.

However, the tasting began with sparkling wines, the way most of us celebrate. On this front, Ezra has another reason for celebration. At the recent International Wine & Spirits Competition in London, Summerhill’s Cipes Gabriel Brut walked off with the Denbies Trophy as the best bottle-fermented international sparkling wine.

This is a validation for the two decades of work that Summerhill has invested in producing good sparkling wine in the Okanagan. It is also a feather in the cap of winemaker Eric von Krosigk and his almost fanatical dedication to sparkling wine.

Eric was the winemaker who helped launch Summerhill in 1991, primarily as a sparkling wine producer. He left there in 1994 for 12 years as a consultant; almost every winery that he worked with had a sparkling wine in its program sooner or later. He even made a sparkling elderflower wine at the now-closed Marley Farm winery on Vancouver Island.

Eric rejoined Summerhill in 2006. Summerhill had never stopped making sparkling wine but the wines seem to have become more refined. Cipes Brut, the winery’s original sparkling wine, was made just with Riesling grapes. Now the winery has produced a vintage Cipes Brut which is a blend of Riesling, Chardonnay and Pinot Blanc. This wine is sold exclusively through the B.C. Liquor Distribution Branch.

After Eric rejoined the winery, Summerhill became a certified organic winery, meaning that it not only uses organic grapes but that it processes them according to a strict organic protocol.

Credit for the organic motivation goes to winery founder Steven Cipes, a former New Yorker who arrived in British Columbia with strong environmental values. He chose not to spray his vineyard because he and his young family were living there. He was also appalled at the thought of the residues draining into Okanagan Lake.

Ezra and his brother, Gabriel, grew up imbued with their father’s values. Initially, Ezra did not embrace the wine industry but chose to play with a rock band. A few years ago, however, he decided to rejoin the family business and is now the general manager. Winning the Denbies Trophy is a great boost for the winery and for Ezra’s wine career.

Here are notes on the current range:

Cipes Vintage 2008 ($28.95). This is a crisp sparkling wine with toasty notes as well as fruit on the nose and with refreshing and clean green apple flavours. The wine only had 12 months on the yeast lees and that explains the pleasant freshness. 90.

Cipes Gabriel NV ($45). This wine, 100% Chardonnay, had 45 months on the yeast lees, giving it rich nutty and creamy flavours and aromas of toast and nuts. The wine still has good acidity, giving it a crisp and dry finish. Clearly, the judges in London liked the complex style of a wine that could be compared with an aged Champagne. 92.

The wine, by the way, is not named for Ezra’s brother but for the archangel. Next year, Summerhill will release a companion angelic sparkling wine, Cipe’s Michael, which is a traditional Champagne cuvée of Chardonnay, Pinot Noir and Pinot Meunier.

Cipes Rosé NV ($29.95). Made from Pinot Noir, this wine spent 18 months on the lees. The fruit is still on display here – notes of strawberry and cranberry, with a tangy and dry finish. 88.

Summerhill Riesling 2009 ($19.95). This wine is style after the Rieslings that Eric came to love in the nine years he studied and worked in German wine regions. The alcohol is a moderate 10.5%. That was achieved by leaving some of the natural sugar unfermented. This wine has herbal and citrus aromas with flavours of lemon, white peach and apricots. The acidity balances the sweetness very nicely. 88.

The wine is made from organic grapes but the label does not proclaim it as organic. The reason: a touch more sulphur was needed to stabilize the wine than is permitted under organic rules. “Our goal is to make good wine first and then go organic,” Ezra says. Having said that, the winery is actively reducing sulphur levels in all its wines, when feasible.

Summerhill Ehrenfelser 2009 ($19.95). Only four or five Okanagan wineries still make Ehrenfelser. It is a good niche – the best selling of Summerhill’s whites. The popularity has to do with the variety’s fruit bowl aromas and flavours. This wine has aromas of apricots and gooseberries and flavours of tropical fruits. 88. 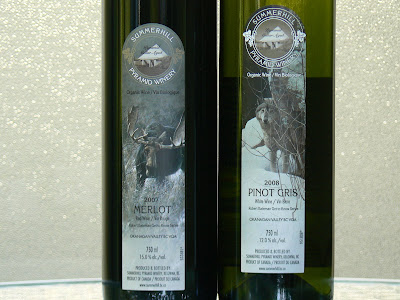 Summerhill Robert Bateman Merlot 2007 ($29.95). The winery has an agreement with artist Robert Bateman – the first time he has lent his name to a wine – for a line of five wines. The winery will donate $1 from every bottle sold to Batemen’s non-profit foundation for connecting youth with nature. Summerhill will also export some of these wines to California.

This Merlot has aromas and flavours of plum, chocolate and tobacco, with a concentrated texture and tannins just firm enough to support a few more years of aging. 88-90.

The grapes for this Merlot are from a grower in Kaleden. Summerhill is sufficiently impressed with the terroir that it has just planted its own 18 acres of Merlot and Cabernet Franc near Kaleden.

Summerhill Cabernet Sauvignon 2007 ($26.95). This is a classic Cabernet, with aromas of red fruit and mint, flavours of black currants, good weight on the palate and a lingering finish. Sulphur levels are very low. 90.

Summerhill Cabernet Franc 2007 ($28.95). The price – compared with Cabernet Sauvignon – suggests which variety Summerhill thinks is better suited for the Okanagan. This wine is a delicious mouthful of fruit – raspberries and ripe plums. The aroma shows spice and vanilla and the finish includes a burst of chocolate. 91.

Summerhill Chalice NV ($29.95). This moderately fortified wine (14.8% alcohol) is a cross between tawny port and Madeira. The wine was made mostly from second pressings of 2003 Pinot Noir and Merlot after they had been pressed for icewine. The wine was aged in barrels which, in summer, were baked in the sun. The result of this unconventional winemaking is a delicious, nutty-tasting wine with a touch of sweetness. 88.
Posted by JohnSchreiner at Goodgrog at 3:45 PM