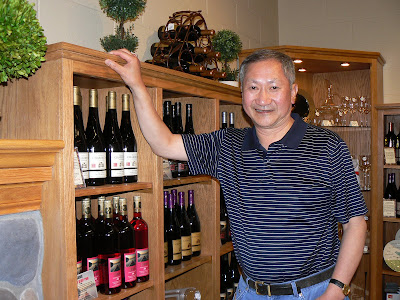 How often do you say “wow” – or something comparable - when you taste a wine?

Last month, I presided over a tasting at the Surrey Museum. One of the wines was Domaine de Chaberton’s Siegerrebe 2008.

One of the guests at the event came up for a second glass, exclaiming in some wonder at how delicious the wine was. Like so many consumers, he had never even heard of the varietal.

That wine won a gold medal at the B.C. Wine Awards (the new name for the Okanagan Wine Festival’s competition). I was one of the 12 judges. I recall the mild surprise in the room as we voted this unheralded variety to its medal. We did not know the name of the winery, of course, but we did know we were putting forward a Siegerrebe.

The other day, I got the complete list of awards won by that wine this year. It is a remarkable record of achievement, including three golds, a source of pride to Eugene Kwan, the Vancouver lawyer who is one of the winery's owners.

Not bad for a variety that is relatively unknown and that retails for only $16.25 a bottle.

The variety was developed in Germany about 100 years ago and is a cross of Gewürztraminer and Madeleine Angevine. My guess is that the plant breeder was someone called Sieger because “rebe” means grape vine in German. It is Sieger’s vine. Pronouncing the name of the variety would have been easy for him: it is Zee-ger-ray-bee.

The plant breeder was trying to develop a variety that would ripen early in cool climate vineyards, achieving fairly high sugars along with spicy aromas and flavours. These are so dramatic that Jancis Robinson, the British wine writer, once cracked this variety was grown by the same sort of “exhibitionists” who grow giant vegetables.

The plant breeder succeeded in spades in developing an early variety. In vineyards like Domaine de Chaberton, which is in Langley, and on Vancouver Island and in the Shuswap, Siegerrebe is usually ready to be picked by late August and certainly by early September.

It has a few drawbacks in the vineyard as well. Most notably, the fine aroma and the early sweetness often is a magnet for wasps. The insects settle on the grapes and suck the juice from the skins, leaving behind hollow grapes or grapes with wounds that attract disease. Several winemakers on Vancouver Island have admitted to clearing the insects from the clusters with portable vacuum cleaners. I can’t imagine cleaning the bag!

Once the wasps have settled in, they tend to hang around for the entire vintage, moving from variety to variety as the grapes ripen. There are ways to control wasps but some growers just plant other varieties and minimize the issue.

Domaine de Chaberton’s 2008 Siegerrebe is now almost sold out. However, the 2009 vintage – 529 cases – is just about to be released. I would expect the quality to be comparable, if not better, since 2009 was a fine vintage on the coast. Dr. Elias Phiniotis, Domaine de Chaberton’s winemaker, believes the 2010 Siegerrebe will also be very good. This was quite a cool season but the variety, after all, was bred for seasons like this.

What does Siegerrebe taste like? It is a lot like Gewürztraminer, with a spicy aroma and with an intense array of spicy tropical fruit flavours. The wine is finished ever so slightly off-dry, preventing the variety’s Muscat notes from coming across as bitterness.

Dr. Phiniotis thinks he knows why he is so comfortable making Siegerrebe. “Maybe I was lucky to start my career with wines like that in Cyprus, a long time ago,” he says.
Posted by JohnSchreiner at Goodgrog at 2:33 PM

Absolutely John! I tried this wine in the Spring when I made my way down to Chaberton... fantastic levels, great vibrancy - thoroughly enjoyable wine for a very affordable pricepoint. I think this is a highlight of what BC wines can achieve without overcharging.