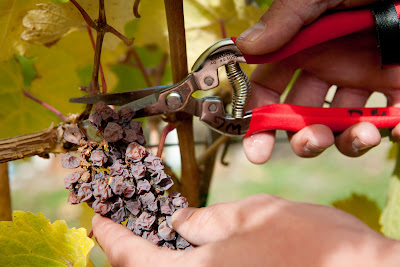 Because of the Okanagan’s dry climate, wineries rarely can make totally botrytis-affected wine. However, it seems that the 2010 vintage has produced a good handful of these delicious dessert wines.

Wild Goose Vineyards of Okanagan Falls was able to make about 100 litres of “totally botrytis-affected” or TBA Riesling. That is about 250 half bottles and it will be released next year, probably in May.

Roland Kruger, who looks after marketing for this family-operated winery, has not yet decided on the price or on how to manage the sales. As this news gets out, I would expect there will be a scramble to get on the waiting list.

The only previous TBA vintage at Wild Goose, whose vineyard was planted in 1983, was in 2004. The story of that wine is critical to the production of the current vintage.

The View Winery in Kelowna has 1,300 litres of totally botrytis-affectd Optima from 2010.It is a first for this winery, which only opened in 2008. The winery intended to sell all of its Optima to another winery for table wine. When botrytis appeared in the vineyard, the unaffectd grapes were selected for sale to the customer winery while those with noble rot were allowed to hang two more weeks until mid-October, shrivelling and concentrating the sugar until the grapes hit 40 Brix.

"Most winemakers are scared when they see a little bit of botrytis," says Bernhard Schirrmeister,The View's winemaker. It does not scare him because he trained and worked in Germany, where botrytis wines are made often. The View's Optima should be a classic TBA, having finished with 120 grams of residual sugar balanced by 10.1 grams of acid.

Clos du Soleil winery in the Similkameen also has just picked enough botrytized Sauvignon Blanc to make about 350 litres of a wine styled on Sauternes. Ann Sperling, the winemaker, has a real love of and affinity for late harvest wines. Those with long memories might recall a wonderful botryized Ehrenfelser she made for Andres in the 1980s.

Conditions for noble rot, as the beneficial botrytis is called, generally are mist in the morning that fosters the growth of the mould, followed by a dry day that prevents it from turning into grey rot.

This year, the Okanagan received an unusual amount of rain and cool weather in the first half of September. In most vineyards, this set up the conditions for grey rot. It can be – and in most cases was – controlled with timely spraying.

In two of the Wild Goose vineyards (the estate vineyard at Okanagan Falls and the new one on Secrest Road north of Oliver), there were small blocks of Riesling where the botrytis evolved into noble rot.

Noble rot does not rot the grapes; it dehydrates them (see the photos). What remains in the grape is a concentrated solution of sugar, acidity and flavour. 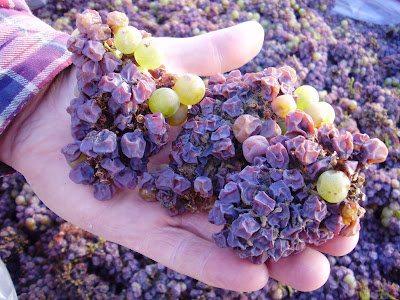 The Riesling that Wild Goose picked on October 18 had readings of 39 Brix (roughly 39% sugar) and 12.5 grams of acid per litre.

To put that in perspective, those would be good readings for Icewine. (The weather forecast for the Okanagan over the next week portends superb conditions for Icewine this year.)

I am a great lover of Icewine but I would not argue with anyone who maintains that TBA wines are even better. The botrytis contributes wonderful flavours and aromas of honey and fresh cut tobacco. TBA wines also age well, probably better than Icewine. If you have had a child this year, the Wild Goose TBA might be just the wine to lay down for that child’s 21st birthday.

The connection between Wild Goose’s 2004 TBA and this vintage is quite poignant.

In 2004, a young winemaker from the Loire in France, Fabian Jamet, was in the Okanagan. A top-ten graduate from the University of Bordeaux, with a speciality in TBA wines, Fabian spent six months at St. Hubertus Estate Winery.

When his job there ended, Wild Goose offered him employment. It was their good fortune that he was at Wild Goose that fall when the TBA grapes came in. He was able to show winemaker Hagen Kruger how to make wine from this shrivelled fruit with the high Brix.

“It was an honour to work with Fabian,” Hagen says. “We will always be inspired by his passion for making this very special wine.”

Fabian actually wanted to stay in the Okanagan rather than return to the Loire and work with the same grapes his family had grown for generations. Wild Goose offered him a permanent job and applied to Immigration Canada for permission to hire him. “While the immigration process snailed along, we began harvesting the TBA,” Roland remembers.

“We ended up buying him a plane ticket back home,” Roland says. “Two days later I drove him to Vancouver. My last memories of Fabian were of him sitting at the airport, having a glass of wine and watching his favourite basketball team on TV, the San Antonio Spurs.”

The Krugers were never to see him again. A year later, at the age of 27, Fabian died when overcome by carbon dioxide in a French winery.

“Although he is gone, he still lives on in the few bottles of 2004 TBA that we have tucked away in our cellar,” Roland adds. “He has also been resurrected in memory as we produce our new 2010 TBA.”
Posted by JohnSchreiner at Goodgrog at 1:59 PM