Osoyoos Larose will move ahead on winery 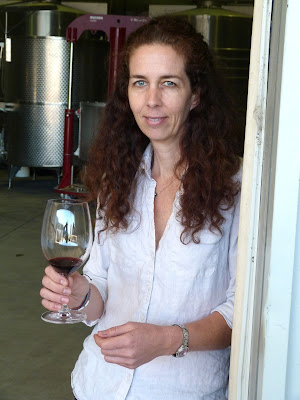 The best-known Okanagan wine in Quebec may well be Le Grand Vin from Osoyoos Larose Winery.

Le Grand Vin’s appeal in that market is due to its sophisticated Bordelaise style. Since the first vintage in 2001, the wine has been crafted by French-trained winemakers, sent to the Okanagan by Groupe Taillan, the Bordeaux producer which helped launch Osoyoos Larose and which now owns 100% of the winery.

From time to time, wine tourists from Quebec stumble around the Okanagan, searching for the Osoyoos Larose tasting room. They are disappointed that there is none.

That is about to change. The individual in charge of making it happen is the new executive manager and winemaker Caroline Schaller. She was sent to the Okanagan in July by Groupe Taillan. She will be making the 2017 vintage with Benoit Giroussens, the other winemaker at Osoyoos Larose.

In between winemaking, she will help her Bordeaux employer acquire a site for a winery and tasting room on or near the 80-acre Osoyoos Larose vineyard in the south Okanagan.

“We have several sites to see first, with different opportunities,” she said in a recent interview. “We want to be sure to find a great one; and also to find a great architect. Then we will build the winery, in one or two years.”

Since 2001, the Osoyoos Larose wines have been made in an expansive cellar at the far northeast corner of the sprawling Jackson Triggs winery north of Oliver. That was the arrangement struck when Groupe Taillan agreed to a 50/50 joint venture with Vincor, as the Jackson Triggs owner was then known. The location precluded a tasting room and public tours, since the access across the Jackson Triggs crush pad is virtually hard hat territory.

The vineyard is on the side of a mountain, with spectacular views over Osoyoos Lake and the south Okanagan Valley. The complication of siting a winery and tasting room there is building an access road that does not go by the Osoyoos town dump. There long before the vineyard, the dump is downhill from the vines. It is not especially unsightly but it might still be shattering to Quebecoise and other lovers of Le Grand Vin.

This is, without a doubt, one of the Okanagan’s icon wines. Here is an excerpt from my recent book: Icon: Flagship Wines from British Columbia’s Best Wineries.

Osoyoos Larose turned the Bordeaux formula on its head with Le Grand Vin, launching it in the 2001 vintage as the premier wine from the estate, not as the second label. It was a surprise because one of the two partners behind Osoyoos Larose (and now the sole owner) was Groupe Taillan of Bordeaux.

Taillan operates several chateaux in Bordeaux, including Château Gruaud-Larose, a distinguished second-growth winery in Saint-Julien. In Bordeaux, grapes from young vines—vines less than 15 years old—are almost never blended into an estate’s top wine. They are usually reserved for an estate’s second label.

At Osoyoos Larose, Le Grand Vin 2001 was made with fruit from three-year-old vines. The second label, Pétales d’Osoyoos, was not even launched until the 2005 vintage. Even then, it was not created as a home for fruit from young vines but rather for the barrels of quality wine left over after the blend for Le Grand Vin had been decided.

“At the beginning, we intended to have two labels, and the first release in 2001 would be the second label,” says Pascal Madevon, the French-born winemaker who managed Osoyoos Larose for 10 years. Referring to Le Grand Vin, he says: “The first label was to be for the later years because the 2001 is from young vines. That was not the case. The wine is so good, we decided to put Osoyoos Larose on the 2001 label, and we decided to put 95 percent of the 2001 vintage into the blend—except six or seven barrels of hard-press wine. Incredible!”

The winemakers who have succeeded Pascal (now a busy Okanagan consultant) have all been equally impressed with the vineyard.

“Unbelievable, I have to say,” Caroline Schaller remarks. “I saw it on Google Earth, but I could not imagine the mountain, the elevation, the lake. The contrast between the dryness of the mountain and the green of the vineyard and the blue of the lake, it is just unbelievable.  The view is just beautiful from the vineyard.”

Born in Toulouse, she trained at the wine school there, the Centre de Viticulture et d’oenologie de Midi Pyrénées, from which she graduated in 1999. She acquired in international experience first in Napa, where she worked as a cellar hand for Pine Ridge Winery in 2000 and then as a laboratory technician there in 2001.

From 2004 until 2017, Caroline was executive manager and winemaker at Domaine d’En Ségur, a producer in the Tarn region of southwestern France. She also was active as a writer and teacher of wine. This year, a winemaker friend employed by Groupe Taillan recommended Caroline for the position in the Okanagan.

She has moved to the Okanagan with her husband, Arnaud Thierry, who is also a winemaker, and their children, a daughter aged six and a son aged nine, and their dog.

“My dog is a fox terrier,” she says. “They hunt but I am afraid what will happen if he hunts here. In France, he used to hunt alone for rabbits – but here, it is not rabbits. What impressed me here also is that we feel we live in the animals’ land. They are not in our land. We are in their land. It’s their country.”

Coinciding with her arrival at Osoyoos Larose, the winery has just released the 2014 Le Grand Vin. The 2013 Pétales d’Osoyoos was previously released. Both are widely distributed.

Osoyoos Larose Pétales d’Osoyoos 2013 ($25.99). This wine is 82% Merlot, 14% Cabernet Sauvignon, 2.5% Malbec, 1% Petit Verdot and ½% Cabernet Franc. The high proportion of Merlot gives the wine its appealing approachability. The aromas and fresh flavours of cassis, cherry and raspberry are framed by ripe tannins. The wine was aged 14 to 16 months in French oak barrels that were one to two years old. New oak was deliberately avoided to preserve the fresh and fruity character of the wine. 90.

Osoyoos Larose Le Grand Vin 2014 ($45.99). This wine is 68% Merlot, 11% Cabernet Franc, 8% each of Cabernet Sauvignon and Petit Verdot, and 5% Malbec. The wine was aged 18 to 20 months in French oak, with 60% of the barrels new and 40% one year old. The blend and the barrel selection lead to wine with a fine concentrated structure. There are aromas of black currant and other dark fruits with a touch of vanilla. On the palate, there are flavours of black currant, black cherry and spiced black fruit framed with vanilla and long, ripe tannins. The winery took advantage of the harmonious 2014 vintage, one of the best ever in the Okanagan, to craft a classic red worthy of its name. 94.

Posted by JohnSchreiner at Goodgrog at 8:30 AM