Dames Rosé: wine for a good cause 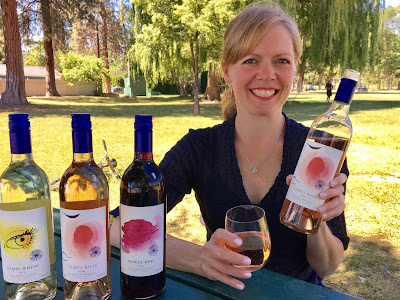 Recently, a cheque of $17,000 was given to the BC chapter of Les Dames d’Escoffier, an organization dedicated to supporting female professionals getting into the wine industry.

The money had been raised from the sale of wines made by Mireille Sauvé, a Vancouver wine marketing consultant whose career once got a boost from a Dames scholarship.

The story is related in a news release from the BC chapter. I cannot improve on the narrative, so I will just reproduce it.

Back in 1991, a 22-year-old Mireille was struggling with her career. Having started working in restaurants at the young age of 14, she was an established server in fine dining with vast experience but frustrated that she was unable to find anyone to take her under their wing to attain management status, and a professional sommelier degree from Toronto’s George Brown University was both out of financial reach and necessitated a move across the country.

A few senior women in the industry knew of her talents and ambition and encouraged her to apply for a scholarship from the local chapter of Les Dames d’Escoffier, money they raised throughout the year for exactly this type of need. Mireille received a generous scholarship, scored honours distinction in her course, and went on to become the youngest certified sommelier (yes, of any gender) in Canada.
Apprenticeship at a Washington State winery, work experience with Eric von Krosigk at Hawthorne Mountain Vineyards (now See-Ya-Later Ranch) behind her; her own successful wine consulting business; travels across the world judging wine and no less than three children later, Mireille had reached a level in her career and was invited to join Les Dames as member - the very same organization that had helped her to pay for the schooling she needed to reach this place in her career. Talk about full circle.

Jumping into the fundraising arm of the chapter committees she saw an opportunity to move away from silent auctions and give back, include other members in an amazing winemaking experience and, if she was lucky, be able to involve and give back to a whole new generation of female winemakers and sommeliers by making and bottling wine with all the profits being donated back to the chapter. The BC Chapter was thrilled to be the sole recipient of these funds and was on hand to accept the first cheque, which was presented August 29th at a “Dames wine” tasting at Marquis Wine Cellars in Vancouver.

Mireille started to experiment with the white wine a few years ago as she discussed her dream of creating a special Dames wine. An early prototype blending Sauvignon Blanc and Muscat was good enough to inspire her. With that presentation, the chapter approved her use of their branding and gave her their blessing to move ahead. When it was time to pick the grapes, heavy smoke taint from forest fires in Washington State (2015) meant the grapes were at risk in Mireille’s estimation so she went looking for grapes from other regions of the Okanagan or a varietal that would be enhanced, rather than compromised, by a smoky characteristic.

This was a serendipitous move as not only did she find some amazing Pinot Blanc grapes in winemaker Ann Sperling’s vineyard, Ann became not only a mentor, but a friend and her beautiful grapes would go on to be part of the blend for the Dames Rosé and future sparkling wine, next in line. The other grapes that Mireille choose to blend into the white were a Riesling from Sperling Vineyard and a Gewurztraminer from Meyer Family Vineyards, both vinified dry as was the Pinot Blanc.

The red wine grapes were already crushed and Mireille found an organic Merlot that she loved as the base for the “Dames Red”. She turned to her former boss and friend Eric von Krosigk, who had just made a Syrah from grapes grown in the south Okanagan, and like the Merlot, also organic, and Katie Bruce, a young viniculturist at Summerhill, oversaw its production.  The Dames Red is 70% organic Merlot and 30% organic Syrah.

“Dames Sparkling” - Working again from Ann Sperling’s grapes, a dry sparkling wine, due to be bottled this fall, will mark the final celebration in the year that marks Les Dames d’Escoffier, BC Chapter’s 25th Anniversary.

The Dames Rosé 2016, which was released recently, is a blend of 80% Pinot Blanc and 20% Pinot Noir. Mireille set out to make a Provençale style rosé. The French often use a variety called Cinsault which has good minerality, delivers strawberry flavours and is not too dark.
The Pinot Blanc that she chose once again came from the Sperling Vineyard in East Kelowna, which delivers the desired minerality and structure. The Pinot Noir, which delivers the colour and the fruitiness, is from the Stoneboat Vineyard on the Black Sage Bench. The grapes were processed at the Sperling winery.

Here is a note on the wine. It is available in several private wine stores and restaurants and by the case from www.dameswine.com.

Dames Rosé 2016 ($23-$29). The wine has that south of France pale hue – light salmon pink - that has become fashionable. It begins with aromas of pink grapefruit that lead to flavours of strawberry and grapefruit. The wine has good weight on the palate. The finish is dry and refreshing. 90.
Posted by JohnSchreiner at Goodgrog at 8:48 AM