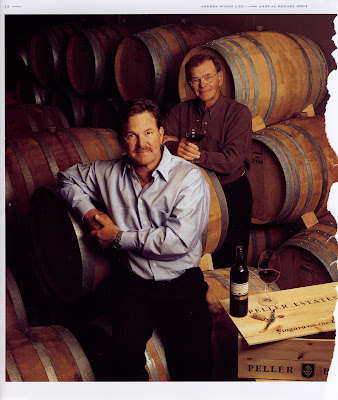 “My grandfather started our business in the Okanagan nearly 60 years ago, and we have always been inspired by the Valley’s promise to make wines that rival the very best in the world,” APL chief executive officer John Peller said in a statement.

“We have long admired these leading estate VQA wineries and now it is a privilege to bring their ultra-premium wines and talented people into our family,” he added “With our investment and resources, these wines have the potential to grow, develop and compete in the growing luxury wine market around the world.”

The combined sales of the three wineries being acquired is about $25 million. APL’s sales in the year ended March 31, 2017, totalled $342.6 million.  This deal cements APL’s position as the largest wine company in Canada.

It will also shake up the BC wine industry. “Buying all three at once is a huge game changer,” says industry veteran Harry McWatters.

There is also a sense of relief that three jewels of Okanagan winemaking will remain in Canadian hands. McWatters notes that APL “has always respected wine colleagues that are competitors.”

The marketing manager of a mid-sized Okanagan winery added: “Andrew Peller did what they thought was best to position themselves competitively locally and globally into the future. As of today, I would say the B.C wine industry just grew up a little more!”

This move also strengthens APL’s position in the production of premium Canadian-grown wine.

While this is the single largest purchase by APL in its history, the family-controlled winery has a history of making acquisitions in the Canadian wine industry. In the company’s 2015 annual report, it said: “Since 1995 we have successfully completed and integrated fourteen accretive acquisitions for a total investment of approximately $113.8 million.”

Each of the three acquired wineries appears to have had its own motivation to accept the APL offer.

At family-owned Gray Monk, founders George and Trudy Heiss are well past retirement age: George was born in 1939 and Trudy in 1940. For several years, they have examined options for transferring the assets either to a succeeding generation of the Heiss family or to a purchaser with values compatible their theirs.

George and Trudy, both former operators of hair salons, began growing grapes in the Okanagan in 1972. Their winery, which opened in 1982, was one of the early estate wineries. It is now believed to be producing about 75,000 cases a year. The winery owns about 50 acres of vineyard and contracts from a significant number of growers.

“We’ve known the Peller family for many years and share and appreciate the same values and approach to quality winemaking,” George Heiss said in a statement.

At Tinhorn Creek, a 40,000-case producer, the major shareholders are Alberta oil industry executive Bob Shaunessy, his wife, Barb, and Kenn and Sandra Oldfield. Sandra is president at Tinhorn Creek while husband Kenn has largely retired from activities at the winery.

Tinhorn Creek opened in 1995, based on 150 acres of vineyards acquired or developed by the partners both on the Black Sage Bench and on what is now the Golden Mile Bench, where the winery is located.
“It has been the honour of my life to have helped build Tinhorn Creek, to make great wines with an attention to sustainability and most importantly, to run our business with empathy toward our employees, our customers and our community,” Tinhorn Creek’s Sandra Oldfield said in a statement. “Andrew Peller will continue the long-term development and growth in the Okanagan that we started.”

Black Hills is the smallest of the three producers, probably around 10,000 cases a year, but it is the producer of a red blend called Nota Bene, the most coveted cult wine from the Okanagan. It owns 50 acres of vineyards.

Black Hills opened in 1991, based on a Black Sage Road vineyard planted in 1996 to premium Bordeaux varieties. In 2007, the founders sold Black Hills to Vinequest Wine Partners Limited Partnership.

In a financial circular at the time, Glenn Fawcett, the managing partner, told investors that: “Subject to market conditions at the time, it is the intention of the General Partner to achieve a liquidity event for the Partnership in a 5 to 7-year time frame. Such liquidity event could be in the form of selling the Business and Assets to a private buyer or a public company involved in acquisitions of wineries.”

Now that 10 years have elapsed, some of his investors had become interested in cashing in what has been a solid investment. “Discussions have been ongoing since April 2017, with several parties expressing interest,” Fawcett said in a statement. APL was confirmed in July as the final bidder.

Fawcett said that nothing will change at Black Hills immediately except ownership. “The new owner plans to keep most, if not all, the staff. APL wishes to keep the hospitality, evens and current portfolio intact,” he said.

APL got its start in 1961 when Andrew Peller, a former Hamilton brewer, established what was then known as Andrés Wines Ltd. in Port Moody, a Vancouver suburb. He had previously applied for a winery license in Ontario but the conditions set down by the province would not have made the business viable.

The elder Peller established wineries across Canada. When the business got into financial difficulty, his son, Joseph, gave up his medical practice to run the wine business. Some years ago, Joseph’s son, John, succeeded him at the helm of the business. APL is publicly traded but the Peller family controls it.

APL’s Okanagan footprint was limited to some vineyard holdings until 2005. In that year, it bought Calona Wines, its sister premium producer, Sandhill Wines, and the Red Rooster Winery on the Naramata Bench.

With a history dating from 1932, Calona – based in Kelowna – is the oldest continually operating winery in B.C. Sandhill was launched in 1997 as a producer of single vineyard wines.

When APL completes the purchase of Gray Monk, Black Hills and Tinhorn, it will rival Mission Hill Family Estates in size in the Okanagan. Nationally, APL, with five wineries in Ontario and one in Nova Scotia, is larger. APL also owns 101 retail wine stores in Ontario.
Posted by JohnSchreiner at Goodgrog at 3:21 PM