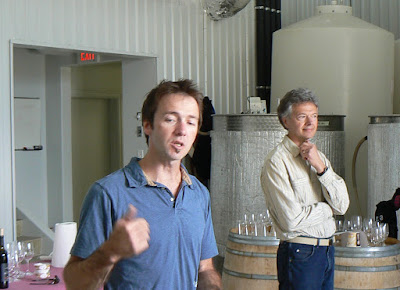 This winery, which opened in 1996, has a portfolio of about two dozen wines, offered at a range of price points up to $40-$50. That includes one of the best Merlot wines in the Okanagan and a rare example of Grenache. These are wines appealing to collectors.

However, proprietor Larry Gerelus and Dwight Sick, his winemaker, are clearly not ignoring the average consumer who just wants a good bottle or two without breaking the bank.

The quality and the work that has gone into these three wines certainly would justify a higher price.

Start with the Sauvignon Blanc. One can dial in a crisp lemony white with laser beam freshness simply by fermenting it all in stainless steel. Dwight went for more complexity. While 80% was fermented in stainless, the other 28% was fermented slowly, at a cool temperature, in new French oak. (Do you know how expensive French oak is?) Then the wine spent two months on the lees which were stirred once a week.

Or take the Riesling. The grapes were harvested in two lots. The first lot was fermented in stainless steel for about 28 days at 15 degrees C; then fermentation was stopped to leave a touch of residual sugar. The second lot was fermented in new 300 litre French hogsheads (do you know how expensive French hogsheads are?). Fermentation of the second lot to total dryness was done with indigenous yeast. The wine was left on the lees for a month, with bi-weekly stirring. Then the lots were combined.

And the detail tweaking was not over. Dwight blended three per cent Ottonel into the final blend. What that adds is a noticeable hint of spice on the finish. It also helps to moderate the bracing acidity.

Or the Heritage Block: detailed winemaking went into this Bordeaux blend, including aging the wine 18 months in French and American oak. The five grapes in the blend were sourced from three different vineyards in the south Okanagan. Half the berries were left whole and uncrushed, a technique to capture more fruit but not too much tannin.

The bottom line is that the winery has put a lot of work into these three wines but has managed to release them at popular prices.

Stag’s Hollow Sauvignon Blanc 2014 ($17.99 for 399 cases).
The wine begins with aromas of guava and lime which are echoed in the flavour. The wine has good weight on the palate, the result of fermenting 20% in barrel and stirring the wine on its lees for two months. The lees work has added an herbal complexity to the dry and lingering finish. 90.

Stag’s Hollow Riesling 2014 ($17.99 for 849 cases). The bold aromas of lime and pink grapefruit give this wine immediate appeal in the glass. On the palate, there are flavours of lemon, green apple and stone fruit, with a hint of spice from the three per cent Ottonel blended into this wine. The bracing acidity gives the wine a crisp, dry finish. This wine has great aging potential. I would strongly urge cellaring this for several years so that bottle development fully unlocks all the qualities. 90-92.

Stag’s Hollow Heritage Block 2012 ($21.99 for 2,200 cases). This is a blend of 49% Merlot, 37.5% Cabernet Franc, 8.5% Cabernet Sauvignon, 2.5% each of Malbec and Petit Verdot. The wine begins with aromas of black currants, black cherries, vanilla and chocolate. There are flavours of black cherry mingled with savoury hints of sage and cedar on the finish. The tannins are long and ripe. The wine’s 18 months aging in French and American oak have given the wine an accessible texture as well as an ability to age for at least five years. This is excellent value. 90.
Posted by JohnSchreiner at Goodgrog at 4:29 PM