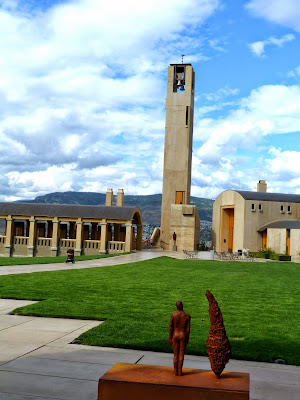 John Simes, the legendary chief winemaker at Mission Hill Family Estates, is turning over the cellar to Darryl Brooker, the currant winemaker at CedarCreek Estate Winery.

Darryl becomes Mission Hill’s chief winemaker with the 2015 vintage. John will now devote himself totally to managing the Okanagan vineyards that support Mission Hill and its sister wineries.

The VMF wineries in addition to Mission Hill include CedarCreek (purchased in early 2014), Martin’s Lane (under construction near CedarCreek) and CheckMate Artisanal Winery. The latter is the former Antelope Ridge Winery on the Golden Mile, which Von Mandl acquired in 2012. The first CheckMate wines are expected to be released later this year.

Darryl Brooker clearly was one of the key assets that came with the purchase of Mission Hill. 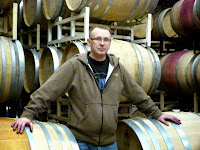 Born in in 1973, Darryl (left) is a graduate of in . He has a Bachelor of Applied Science - Wine Science, as well as a graduate diploma from in Wine Business.

He made wine at Villa Maria Estate in and at Mountadam Vineyards in in .  He came to in 2003 when he was hired to launch Flat Rock Cellars in . He moved to the Andrew Peller group, working at Hillebrand and Thirty Bench, before joining CedarCreek in 2010.

He embraces both traditional and new world winemaking practices. He employs wild yeasts; he ferments some wines in concrete eggs. In 2013, CedarCreek became the first Okanagan winery to ferment some reds in a 400-litre clay amphora made in .

He was also tasked with designing the new Martin’s Lane Winery, now completing construction. He also made the 2014 vintage for Martin’s Lane, a winery specializing in Pinot Noir and Riesling.

He is certainly stepping into big shoes. No winemaker has had as much impact on the Okanagan as John Simes, beginning with the 1992 Chardonnay that won the prestigious Avery’s Trophy at the International Wine & Spirits Competition in in 1994. It was almost certainly the first major award to an Okanagan wine from an international competition.

Born in 1950 at Palmerston North, near , the capital of , John (below) at first put his applied science degree to work with an ice cream company. He joined Montana Wines Ltd., then 's largest winery, in 1978 and moved quickly from managing the bottle cellars to become a senior winemaker and vineyard manager.

In 1991 Mission Hill’s von Mandl began wooing John, whose wife Sheilagh is from . The winemaker pondered the offer throughout the first half of 1992, accepting just before the vintage in the Okanagan.

He arrived at Mission Hill in September 1992, with some of the early grapes already arriving. "Most of the grapes in the Okanagan are harvested at the end of September and into early October. I had a chance to start to get things changed in the way the fruit was processed in the winery," he told me a few years later. "We totally changed almost everything that happened with the grapes, including when they were picked. I spent a huge amount of time trying to sweet talk the growers into not harvesting, to leave the fruit hanging on the vine."

Most of the Chardonnay for the award-winning wine came from vineyards in the Oliver area that have since been acquired by von Mandl. John was impressed as soon as he saw the grapes. "I could tell the fruit was brilliant," he told me. "I called Anthony [von Mandl, Mission Hill's owner] and I said this fruit tastes as good as I've ever seen Chardonnay taste. It cries out for new oak for barrel fermentation."

With the immediate green light from von Mandl, John had about 100 American oak barrels shipped to the winery in time to barrel-ferment the Chardonnay.  Some of the Chardonnay also was fermented in stainless steel tanks and the two lots were blended into the 1992 Grand Reserve Barrel Select Chardonnay, as the wine was called.

The award put the Okanagan on the map. It certainly transformed Mission Hill. "In terms of our company, the impact has been phenomenal," John told me later.  "It gave everyone in the organization confidence that we could do it, that the resource existed to make international quality wines, and that if we did, people would pay reasonable dollar values for them that would give us sufficient return to re-invest. Until that wine, the business confidence, from the owner of the company right down to the sales guys, wasn't there."

In the year after winning that award, Mission Hill began a $10 million capital expansion program. It included almost one million litres of new stainless steel processing equipment and hundreds of new oak barrels. In 1996 the winery purchased vineyard property, its first, at Osoyoos and began planting 150 acres of vines on a sun-baked site on the Canada-United States border. The winery has invested continually since then, both in vineyards and in state of the art winemaking facilities.

The pinnacle of the Mission Hill portfolio is Oculus, the blend that John first created in 1997. It crowns a large and impressive portfolio of wines, many of which are grown on the nearly 1,000 acres of estate-owned vineyards.

These vineyards now get John’s full attention. “I see our vineyards as the last frontier in allowing our wines to become amongst the most sought-after in the world,” he said in a statement. “With the von Mandl family’s commitment to continually raising the bar and their commitment to leading edge research and technology in our vineyards, there is no telling where we can go from here.”

Posted by JohnSchreiner at Goodgrog at 12:52 PM