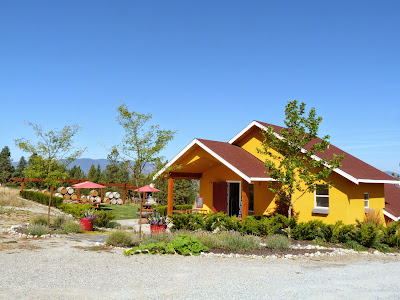 In late summer of 2013, a brief but devastating hail storm savaged the Gentleman Farmer Vineyard at SpierHead Winery in .

The setback prevented the winery from making either a vineyard-designated Pinot Noir or Riesling from that vineyard in 2013.

However, winery proprietor Bill Knutson reacted by sourcing Pinot Noir from a grower in Summerland, just released as the Golden Retreat Vineyard Pinot Noir. Bill also negotiated a long-term contract for these grapes. That is good news for lovers of SpierHead wines since it extends the winery’s admirable Pinot Noir portfolio.

The Golden Retreat Vineyard is also the source of Pinot Gris for SpierHead. As a result, the winery’s current releases include two vineyard-designated wines from Golden Retreat along with a Gentleman Farmer Riesling 2014, the latter vineyard having recovered from the previous year’s hail damage.

Both are excellent vineyards, judging from the wines. Gentleman Farmer typically produces Riesling with the bracing acidity and the 2014 is no exception.

There is a longer-term appeal of Golden Retreat to SpierHead.   “The Golden Retreat Vineyard grows some different Pinot Noir clones from those in our vineyard,” Bill points out. “Most notably, the wine contains 60% Pommard, which is a clone that we do not grow, although I have a small amount coming for planting in 2016. To me, this clone introduces a spiciness that I don’t usually recognize in the clones.”

SpierHead Riesling 2014 Gentleman Farmer Vineyard ($19 for 200 cases). With an acidity of 9.2 grams a litre and just 4.3 grams of residual sugar, this is a wine with a crisp and tangy finish. It has aromas and flavours of lime and lemon, with a good spine of minerality. The wine is good now but has great potential to express its rich complexity better if cellared for several years. 88-92.

SpierHead Pinot Gris 2014 Golden Retreat Vineyard ($19 for 710 cases). The wine begins with an appealing aroma that mingles hints of herbs with citrus and apple. On the palate, there are flavours of melon and apple. The wine, fermented and aged in stainless steel, has good weight. 90.

SpierHead Pinot Noir 2013 Golden Retreat Vineyard ($26 for 60 cases). This is 60% Pommard clone, 40% clone 667. The wine was barrel-aged 10 months in French oak (likely not new, judging from the fact the wine is fruit forward). The wine has aromas of cherries, leading to flavours of cherry and plum, with a hint of mocha. The wine has begun to develop the classic silky texture. That was more noticeable, along with a juicy concentration of flavour, when the wine was retasted the day after it was opened. Like the Riesling, the wine will evolve toward a peak in two or three years. 90.
Posted by JohnSchreiner at Goodgrog at 4:12 PM