Big haul of gold for BC at the All Canadians 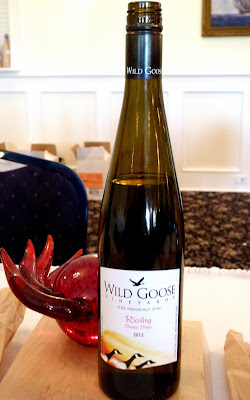 Wild Goose Vineyards is marking its 25th anniversary in style: at the recent All Canadian Wine Championships, the winery’s 2013 Stoney Slope Riesling was acclaimed as the white wine of the year.

Wild Goose also won several other awards, one of several wineries setting a hot pace for an impressive showing by wineries.

The BC wineries entered 711 wines and won 263 medals, of which just over 100 were gold medals.

In total, 1,356 wines were entered from producers in every province except . This is the 35st year for the All Canadians. Competition organizers initially were based in . Last year, the organizers moved to in .

As a member of the judging panel, I was surprised that , which has more wineries than BC, entered significantly fewer wines – especially to a competition run in .

I would not be so arrogant as to suggest producers are afraid of the competition from BC. Trophies for the best red, the best sparkling wine and the best dessert wine all went to .

The trophy for the best fruit wine went to a winery in , Québec, Domain Acer, for a quite remarkable product called Val Ambré. The flavours recall first rate . It is a 16% aperitif based on maple syrup. Acer is Latin for maple and Vallier Robert, the owner of this winery, has described himself as the “ambassador of maple.”

It still puzzles me why so many fine wineries did not compete. Having said that, some leading BC wineries also did not compete. Why not? Well, when you have earned a big reputation, it is embarrassing to get bronze medals.

Having judged in many wine competitions since 1982 (including this one), I don’t think bronze medals should be regarded as embarrassing, if only because judges are less than infallible. I think the judges under-rated or over-rated a few wines at the All Canadians this year. It is not easy to be spot on with every wine when tasting 100 wines a day.

Still, any wine that wins an award has merit.

The complete results for the completion are posted on http://canadianwinetrail.com/cwt/.

Let me just focus on just the gold and double gold medals won by BC wineries. (Double gold means best of class.) I limit this to BC because most of the readers of this blog are BC wine consumers.

Grape Fortifieds and other Dessert:

.
Posted by JohnSchreiner at Goodgrog at 5:07 PM