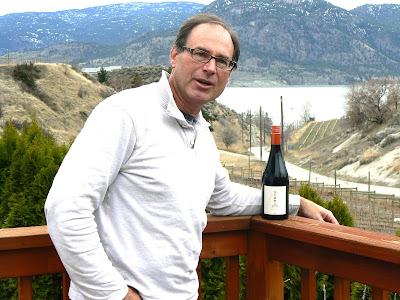 Howling Bluff proprietor Luke Smith was a successful investment advisor when he began a career switch in 2004 to start planting the winery’s Summa Quies vineyard.

A decade of hard work in the vineyard and the winery has not knocked the edge from his enthusiasm for this second career. Visitors to the tasting room discover a man who finds wine growing as bewitching as ever. And that is despite the viticultural U-turn he has made.

Initially, the preponderance of his seven-acre vineyard was planted with varieties. The goal was to make a flagship red blend called Sin Cera. That is Latin for “without wax” coined by Roman stone carvers when working with marble so perfect that no wax was needed to hide the cracks.

Howling Bluff’s Sin Cera wines were always well made. Even so, Luke discovered by 2008 that the reds, at least on his property, had some limitations. It was a gradual epiphany after several vintages that led to a reduction in red plantings and a significant increase in Pinot Noir. He had only planted an acre of Pinot Noir at first.

“It was the culmination of what it was like to farm all of those varieties I had,” he says. “The Pinot Noir is definitely more work but at the end of the day, every single year, the Pinot Noir was ripe. All the other red grapes? No. Merlot was the most consistent but everything else was quite finicky.”

He retained some Merlot and a little Malbec for a small ongoing production of Sin Cera. Most of the original plantings of reds have now been grafted over to Pinot Noir or Sauvignon Blanc. (The white varieties perform better on his Naramata Bench site than the reds.)

He is not at all distressed that Howling Bluff has transitioned so dramatically away from his original concept of making reds.

“I said to myself how horrible would that be if all I made was a world class Pinot Noir?” he says.

He has the awards to show it can be done. He has won three Lieutenant Governor’s Awards of Excellent and two of those were for Pinot Noir.

In 2014, he took another step in his commitment to Pinot Noir by making a rosé. The initial motive was to further improve his Pinot Noir table wine through the classic technique the French call saignée. The term means “bleeding” some juice from freshly crushed red grapes to concentrate the remainder prior to fermentation.

To make this rosé, Luke bled about 10% of the juice from his tanks of Pinot Noir. This juice was put into a stainless steel tank and was fermented at a cool temperature.

“That rosé is as close to a dangerous wine as I have ever made,” Luke says. He means dangerous in the sense that one cannot stop drinking it. If consumers agree with him, it likely will be a permanent addition to the Howling Bluff portfolio.

Here are notes the current releases.

Howling Bluff Sauvignon Blanc 2014 ($20). Spectacular tropical aromas explode from the glass. The lime and the lemon aromas translate into exuberant flavours of those fruits. The wine is crisp and zesty with herbal notes on the finish. 91.

Howling Bluff Sauvignon Blanc Sémillon 2014 ($20). This is a blend of 85% Sauvignon Blanc, 15% Sémillon. The Sémillon anchors the wine and adds complexity and texture to the tropical exuberance of its partner. This wine is rich on the palate, with flavours of peach and ripe apples added to the notes of lime and herbs. The finish is lingering. 92.

Howling Bluff Rosé 2014 ($25). The wine, made from juice bled from tanks of Pinot Noir, was released May 1 and may already be sold out. It is juicy and refreshing, with aromas and flavours of strawberries. A touch of residual sweetness fleshes out the flavours and lifts the aromas. 91.

Howling Bluff Summa Quies Pinot Noir 2012 ($35 for 500 cases). I can’t do better than reproduce some of the winery’s notes. The wine shows “a nose of berry fruit; strawberry, plum, raspberry with floral undertones of potpourri … hints of allspice, fennel, lavender and cedar.” Yes, it is that complex, with flavours of cherry, mocha and spice and with the earthiness on the finish that Burgundians call forest floor. The wine is youthfully firm but is beginning to develop the classic silky texture. 91.

Howling Bluff Sin Cera 2011 ($25 for 225 cases). This is 82% Merlot and 18% Malbec, aged 18 months in new and used French oak. The wine is firm in texture, with flavours of black currant, black cherry, dark chocolate and espresso. As the wine opens up, it reveals a core of sweet fruit on the mid-palate. 90.
Posted by JohnSchreiner at Goodgrog at 3:54 PM