Rocky Creek's 2009s show the promise of that island vintage 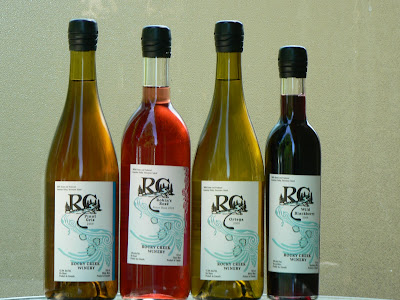 As any Vancouver Island vintner will tell you, the 2009 vintage was one of the finest on record, and a welcome relief after the miserably cool and wet vintages of 2007 and 2008.

Wines from those earlier vintages often were thin and acidic. Solid wines were made by those vintners who took extraordinary measures to get their grapes ripe. However, you needed either to know who the good farmers were or to taste the wines before buying.

It will be a lot less chancy buying the 2009s. The long, warm summer and autumn ripened grapes in coastal vineyards, producing aromatic wines that are harmonious and full of flavour.

Three samples from Rocky Creek Winery at Duncan illustrate the glory of the 2009 vintage.

Rocky Creek is the winery that Linda and Mark Holford opened in 2005 in the basement of their home in suburban Ladysmith. A chemical engineer and a veteran home winemaker, Mark, who was born in 1968, had been thinking of a winery as a future retirement project until discovering he could open without a vineyard as long as he got a commercial license. Rocky Creek was by far the smallest commercial winery in British Columbia.

The other winery license in British Columbia, the land-based license, requires the winery to own a vineyard or a berry patch. It is economically more favourable for a small winery. Thus, in 2008, Mark and Linda moved to a farm in the Cowichan Valley and planted both grapes and blackberries, qualifying as a land-based winery.

Why would anyone plant blackberries when that invasive species would take over all of Vancouver Island if not controlled? Because the regulators insist that land-based wineries that make blackberry wine actually grow some of their berries. The requirement is a bit absurd but then, so are other liquor regulations. Wineries have learned to live with the little absurdities.

Although Rocky Creek’s own grape vines are not yet producing fully, the winery has had other sources of grapes. The winery now has 5.5 acres of estate vineyard and leases another five acres of producing vineyards (one near Chemainus, one near Rocky Creek).

Rocky Creek has a focussed portfolio that includes a dessert-style blackberry wine, a sparkling wine, a pinot noir and the three whites reviewed here. The bubble, called Katherine’s Sparkle, was first made in the 2008 vintage and is sold out at the winery. The 2009 vintage of this wine is due for release this fall.

All the current releases sell for $20 a bottle (the blackberry is released in a half bottle format). All are sealed with a unique Australian closure, called the ZORK, a clever re-sealable plastic closure. To the best of my knowledge, Rocky Creek is the only British Columbia winery so far to adopt this closure. It makes it very easy to open the bottles and you don’t need a cork puller.

Rocky Creek Ortega 2009. This German-developed white has now proven its worth when it comes to yielding good wines in cool climates. This wine begins with an inviting aroma of gooseberries and herbs. On the palate, there are flavours of citrus and melon. The dry, herbal finish has an intriguing note of arugula. 88-90.

Rocky Creek Pinot Gris 2009. The slightly pink blush of this wine indicates that Mark left the juice in contact with the skins to pick up a little extra colour and flavour. The wine begins with delicate fruit aromas (pink grapefruit) with flavours of pears, apples, papaya and even mango. Finishing dry, the wine is crisp and refreshing. 89-90.

Rocky Creek Robin’s Rosé 2009. Since the winery has only released 100 cases, I suspected that, as in 2008, Mark bled a bit of juice from his Pinot Noir with the twin objective of making a darker Pinot Noir and a charming rosé. On the contrary, he sourced Pinot Noir from a new vineyard and crushed it specifically for this wine. The wine’s cherry hue is appealing, as are the aromas and flavours of raspberry and strawberry. Finishing dry, this is a solid food wine. 87.

Rocky Creek Wild Blackberry 2008. A wine with 16% alcohol fermented naturally, this is a rich wine with, as you would expect, tons of the familiar aroma and flavour of the Himalayan blackberry. This is Rocky Creek’s most popular wine, good with cheese or, as the website says, over ice cream. In some years, it was my favourite Rocky Creek wine as well but now I think the 2009s leave it in the shade. 85.
Posted by JohnSchreiner at Goodgrog at 4:12 PM