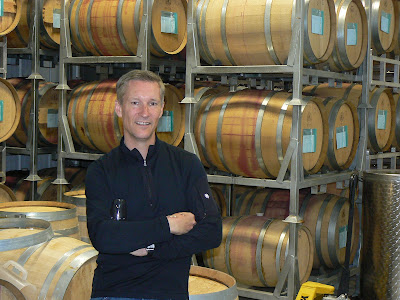 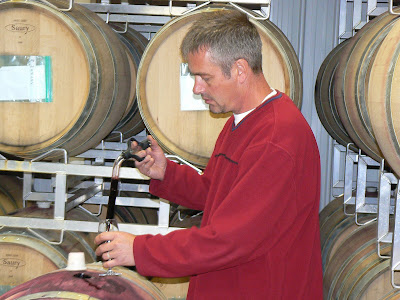 Here is an insider tip after a barrel tasting at the winery: for its coming second release, Painted Rock has done even better. Red Icon 2008, its flagship wine, is arguably better than the 2007.

Since barrel tastings may not be available to everyone who visits Painted Rock, I will titillate you with a few notes on the wines I tasted, including an unexpected wine – a junior Red Icon that will be called Echo, which is made with the wines remaining after Red Icon is blended. In the tradition of the premium second labels from great Bordeaux wineries, Echo will be less expensive than its big brother and is made for more immediate consumption.

Painted Rock has just opened what is perhaps the Okanagan’s smallest tasting room on its vineyard overlooking Skaha Lake. The property is just beside the access road to the famed Skaha climbing bluffs (the road is now a paved road, thanks to the winery). Painted Rock’s address is 400 Smythe Drive, just off winding Eastside Road about 10 minutes south of Penticton. There are signs to both the winery and the climbing bluffs.

The tasting room is small because it is a temporary facility. The building formerly served as the lunchroom for vineyard workers. Now that their lunchroom is in the nearby winery, Painted Rock owner John Skinner turned the building into a stopgap tasting room. He certainly plans a grand tasting room in the future to capitalize on the spectacular views, but the priority now is getting the winery business firmly established.

This property, which John bought in 2004, was once part of the world’s largest apricot farm, or so legend has it. It had been fallow for a number of years. Before vines were planted, the property was sculpted into west-facing contours sloping down toward the lake. The 30-acre vineyard includes the five Bordeaux reds, two clones of Syrah and a block of Chardonnay. While there is a little more room for vines, John seems in no rush to get big. He says that Painted Rock will never produce more than 5,000 cases a year.

A former stock broker, John has involved several top consultants to advise him on the vineyard and the winemaking. One of these is Alain Sutre, a Bordeaux wine guru who consults internationally. His initial contract was for two years. This spring, he asked for an extension.

“I think you own the Pétrus of the Okanagan,” he told John, “and I want to stay on.” High praise, indeed, for the vineyard and what it has begun to produce, although a bit unsettling, considering that Château Pétrus is the world’s most expensive wine.

Alain comes to Painted Rock six or eight times a year, notably when winemaker Gavin Miller needs to blend the wines. Alain’s international experience as a blender may be a big reason why the Red Icon is such an exceptional wine.

What makes the wine singular is that about 20% Petit Verdot is in the blends of both the 2007 and the 2008. It is unusual to find a Bordeaux blend with more than five per cent of Petit Verdot. Most French winemakers use it like spice in cooking.

Winemakers are concerned that the variety’s tannins and its unique perfume will be too dominant. That may be true in Bordeaux but the variety seems to express itself more harmoniously at the “Pétrus of the Okanagan” vineyard.

The 2008 begins with inviting areas of cassis and spice cake, leading to sweet berry flavours … a touch of cherry, a touch of blackberry and currant and a hint of vanilla and chocolate. The tannins are ripe and silky. The wine is very elegant with a long, long finish. 94. The current release sells for $55.

The winery will also be releasing a Merlot 2008 (silky tannins, concentrated blackberry and plum flavours) and a Cabernet Sauvignon 2008 (dark in colour, with layers of cassis, minerals, chocolate and vanilla). I scored both about 90. The current releases sell for $40 each

As for Echo 2009, which is about 65% Merlot, it has not yet finished its time in barrel. However, the tank sample I tasted was delicious, full of sweet berry flavours set against the ripe, silky tannins that this site seems to produce.

Barrel samples of the 2009 Syrah are also delicious, with each clone bringing flavours to the final blend, not yet made.

Finally, Chardonnay 2009, the winery’s second vintage, is also a winner. It begins dramatically with aromas of sweet sage and flowers. The fruit flavours are bright (the winemaker put none of the wine through malolactic fermentation), with notes of grapefruit, lime, tangerine and nectarine. The oak and lees flavours are very subtle. 91. The current release sells for $30.

Was I impressed? You bet I was.
Posted by JohnSchreiner at Goodgrog at 1:51 PM