An evening with [yellow tail] wines 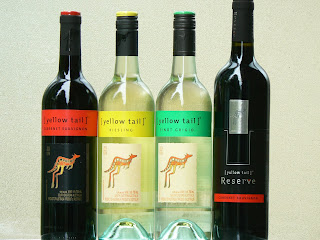 Four samples of [yellow tail] wines arrived at my door on the very afternoon that we were going to a potluck dinner party.

Since I had committed to bringing wines, I shelved my earlier plans and took the four samples instead. At the end of the dinner, one of the guests smacked his lips over the Cabernet Sauvignon and said: “Well, I will rethink my views on [yellow tail]!”

An odd comment – and I never had a chance to ask him just what his views had been. I suspect that he picked up from somewhere the dismissive attitude that[yellow tail] can’t be all that special because the brand is everywhere.

But that is exactly why the brand is special. The Australian brand, which was only launched in 2001, is such a big success because consumers keep buying it. It is the biggest Australian brand in many markets, including British Columbia.

The top-selling red wine in the B.C. liquor stores for several years has been [yellow tail] Shiraz, which has generally outsold the next most popular wine, Jackson-Triggs Merlot, two to one.

Currently, the Liquor Distribution Branch has about 56,000 bottles of various [yellow tail] wines; at least 15 are listed, including two sparkling wines. The brand is bigger than a lot of British Columbia wineries.

In fact, [yellow tail] may be suffering from its own success. The brand has become so ubiquitous that some consumers have begun to look for the next hot brand. Wine brands do have cycles of fashion. About the time that the [yellow tail] brand was created, the hot brand in B.C. liquor stores was Farnese from Italy. It is still here and the three listings, at $8.99 and $9.99, undersell [yellow tail] ($12.99 to $17.99) by a considerable margin. But the LDB stocks only 5,600 bottles now, a long way from the numbers when consumers were buying it by the case.

However, [yellow tail] spreads its success across more varietals and styles than any Argentina producer.

The brand is produced by Casella Wines, a winery started by the Filippo Casella, who just died last October. He and his family moved to Australia from Italy in 1951 and established a winery eight years later. Casella was largely a bulk wine producer before [yellow tail] took off. According to Decanter.com, the winery now has global sales of about 12 million cases.

In recent years, the winery has expanded its range, adding several reserve wines, a rosé and two sparkling wines. The strategy gives the [yellow tail] consumer and opportunity to move up to premium wines after a long love affair with the regular wines.

[yellow tail] Pinot Grigio 2009 ($12.99). Light and fresh, with notes of citrus and apples, this is an uncomplicated white best consumed as an aperitif.

[yellow tail] Riesling 2009 ($12.99). This has a little more personality than the Pinot Grigio, with aromas and flavours of citrus and other tropical fruits. Unlike many Australian Rieslings, which are bone dry, this has enough residual sugar to fatten up the texture.

[yellow tail] Cabernet Sauvignon 2008 ($12.99). This wine was the crowd pleaser at my dinner party. The wine is big, with spicy and jammy flavours of blackberry and with soft tannins. The wine is made in the quintessential [yellow tail] red wine style, with a typical hint of sweetness on the finish.

[yellow tail] Cabernet Sauvignon Reserve 2008 ($17.99 but $15.99 until June 26). This elegant wine has aromas and flavours of cherry, blackberry and mint, with soft, approachable tannins. The finish is also dry.

It is interesting to taste these two Cabernets are tasted side by side. The regular Cabernet is very good quality for a wine that is made and blended in boatload quantities. The reserve, while still showing [yellow tail’s] appealing house style, is more refined. An earlier vintage won the Jimmy Watson trophy in 2004, arguably the most prestigious trophy in the Australian wine industry.

This winery, seen below, can make seriously good wine. 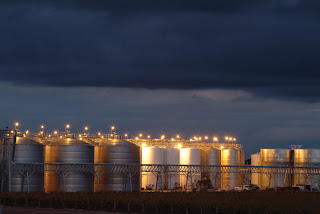 Posted by JohnSchreiner at Goodgrog at 3:26 PM