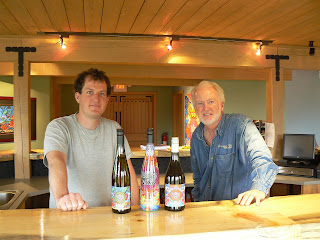 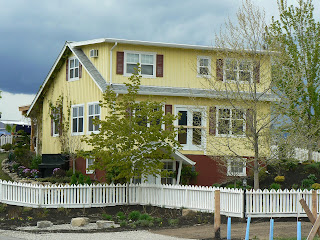 New winery openings are a sure a sign of spring in the Okanagan as the cherry blossoms.

Four wineries, two of which are selling wine for the first time, opened new tasting rooms at the end of the first week of May. Another three are expected to open in June or July. This brings the winery population in British Columbia comfortably above 200.

Okanagan Villa Estate Winery, perched on a plateau with a dramatic view over Kelowna and the Okanagan Valley, opened in East Kelowna last Saturday. The tasting room and wine shop are in a restored heritage house at 3240 Pooley Road. You can’t miss it: it is a bright yellow cottage surrounded by vineyard. There are two bed and breakfast rooms on the second floor. Telephone: 250-762-5405.

The winery is operated by Wyn Lewis, a retired banker, his wife, Marion, and their three sons, including winemaker Anthony, a rock and jazz musician. The business plan calls for the production of white wines. The Lewis family planted only whites: Riesling, Chardonnay, and Gewürztraminer, varieties they believe are most suited to their vineyard.

Wyn and Marion, who were both born in Wales, came to Canada in 1975, soon after they graduated from Cambridge (engineering and botany, respectively). Shortly after, they went to California where Wyn joined the Wells Fargo Bank. He was the bank’s director of international operations before retiring in 2000.

In 2003 Wyn and Marion decided to move to Victoria. But before they began looking for property there, they were advised to check out the Okanagan. The region’s beauty captivated them. They found an apple orchard in East Kelowna. Even with the smoke and flames of the Okanagan Mountain forest fire billowing up not far away, they signed the deal to purchase this spectacular view property. In a few years, vines had replaced most of the orchard.

Their three sons, who toured successfully for a decade with their own band, have also become involved in the wine project. Anthony, the winemaker, is a music producer who has been involved in recording more than 100 albums for a variety of bands. Winemaker, he says, is like sound mixing.

His brother, Phil, is an artist. His paintings have been adapted for Okanagan Villa’s edgy labels. The bottle of one wine, a Gewürztraminer blend called The Vibrant Wine, is wrapped totally with a shrink-wrap label. The other wines are a juicy Riesling and a fine Chardonnay. All sell for $30 each.

“If I could only make one wine, I would make just Chardonnay,” Anthony says. 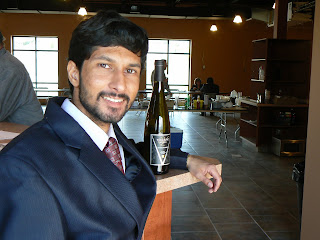 Volcanic Hills Estate Winery at 2845 Boucherie Road in West Kelowna, is a week or two away from opening its tasting room. However, winery president Bobby Gidda and his father, Sarwan, hosted an open house on the weekend. Telephone 778-755-5550.

You definitely cannot miss this winery, a 20,000-square-foot building on the east side of heavily-travelled Boucherie Road. This is the latest in the growing cluster of wineries in this neighbourhood (Beaumont, Little Straw, Mt. Boucherie, Mission Hill and Quails’ Gate).

Volcanic Hills is opening with five well-crafted and well-priced wines: a Gewürztraminer, a Pinot Gris, a Gamay, a Syrah and a Chardonnay Icewine. I enjoyed them all but I was particularly taken with the rich and peppery Syrah, a bargain at $23.90. 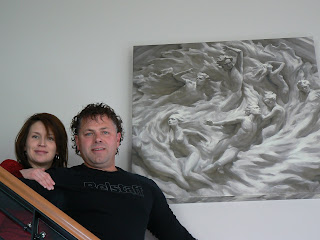 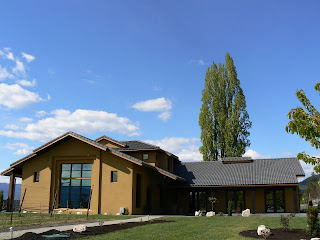 Photos: Decoa and Jeff Harder; Ex Nihilo winery
Ex Nihilo Vineyards (1525 Camp Road, Lake Country, 250-766-5522) has been selling its wines for two years but has only just competed an attractive tasting room. Again, this forms part of a growing cluster of wineries that justify a trip down Camp Road (Gray Monk, Arrowleaf).

Decoa and Jeff Harder, owners of this winery with Alberta livestock dealers Jay and Twyla Paulson, made an initial splash by releasing a Rolling Stones-branded icewine. They followed that up by winning gold medals at the Riesling du Monde competition for both the winery’s 2007 and its 2008 (the current release) Riesling.

The tasting room is worth a stop, both to view the art displayed in these elegant surroundings and to taste excellent wines, most of which I rate 90 or better. The current releases include Pinot Gris ($19.50), Riesling ($22), Merlot ($34.95) and a delicious Bordeaux blend called Night ($39.95). 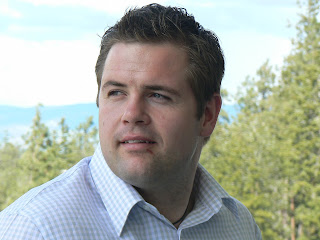 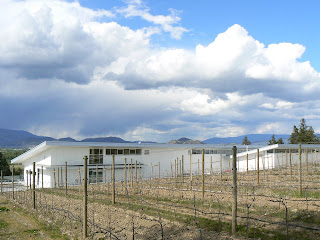 Photos: David Paterson; Tantalus Winery
Tantalus Vineyards (1-877-764-0078) opened its new winery on Saturday at 1670 Dehart Road in Kelowna. There is plenty of art on display here as well and a tasting room with floor to ceiling windows that look over vineyard and the city beyond. Take some time to note the many energy efficient features of the building, including the clever use of natural light throughout.

Tantalus is already established as one of the leading Riesling producers in the Okanagan, with two examples. The “regular” Riesling is $22.90 and is an intense wine with lime flavour notes, bright acidity and a crisp, refreshing finish. The Old Vines Riesling ($29.90) is an intense, laser-focused, mineral-rich classic dry Riesling.

Australian-trained winemaker David Paterson, who joined Tantalus last year, has been bringing the winery’s Pinot Noir up to the same quality level as the Riesling. The new release is the 2008 ($29.90) is an attractive velvet-textured charmer.

In 2009 David also made a juicy rosé for Tantalus, using Pinot Noir and Pinot Meunier grapes. The wine has flavours of raspberry and a refreshing, dry finish.

And the three Okanagan wineries in the wings:

Krāzē Legz Vineyard and Winery at 141 Fir Avenue in Kaleden (250-497-6957) hopes to have its tasting room construction completed by June 1.

Ancient Hill Vineyards at 4918 Anderson Road, Kelowna (250-491-2766), just east of Kelowna International Airport, expects to open in July (having been delayed by the late arrival of bottling equipment from Europe.)

Serendipity Winery at 990 Debeck Road, Naramata (250-496-5299) has just begun construction of a winery and tasting room. However, the wines are just appearing on the market and owner Judy Kingston will do tastings by appointment. A Viognier ($24) and a white blend ($18) are just being released and a red Bordeaux blend will be ready shortly. The latter wine, called Serenata, is $29.90 if ordered prior to release.
Posted by JohnSchreiner at Goodgrog at 2:48 PM