Volcanic Hills: wines you can afford 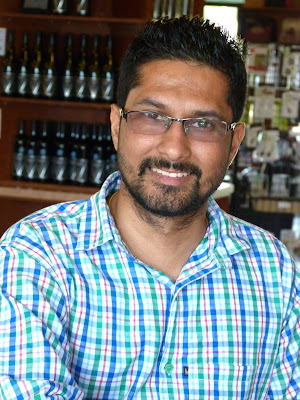 With almost 70 acres of vineyard and with contract growers, Volcanic Hills Estate Winery crafts an extensive portfolio of reasonably-priced wines.

Now going into its 10th year, the winery is operated by Sarwan Gidda and his son, Bobby. Sarwan, born in India in 1953, was one of three brothers who launched Mt. Boucherie Estate Winery in 2000.

Sarwan left that partnership in 2008 and built the 1,400 square-meter (15,000 square-foot) Volcanic Hills winery. A subsequent falling out between the remaining brothers led Mt. Boucherie into receivership and to new ownership several years ago.

But it remains business as usual with Volcanic Hills. The winery is managed by Bobby. Born in 1985, he graduated in business administration at Okanagan College and worked in the finance department there while taking the college’s winery assistant and winery sales courses. As part of the course work, Bobby, who previously worked in the cellar, designed Volcanic Hills, a $2.3 million winery with geothermal heating and cooling. The expansive wine shop is above the processing cellars, with a view of . Volcanic Hills, which opened in 2009, also has a popular restaurant next to the wine shop.

The winemaker here is Daniel Bontorin, a veteran Okanagan winemaker. Born in Surrey in 1976, Daniel pursued various jobs in the Okanagan, including importing motorcycle parts, until 2000 when he recognized that the real future was in wine. After courses at , he worked in the cellars at several wineries including Fairview Cellars, Domaine Combret, and Hester Creek. Then, after a vintage in northern Italy, he joined Le Vieux Pin in 2005 and became a consultant in 2010.

The Volcanic Hills vineyards afford the opportunity to make a number of quite complex blends.
The winery takes its name from its proximity to Mt. Boucherie, believed to be an extinct volcano. The terminology around volcanoes has inspired several of the winery’s labels.

Volcanic Hills Bubbly Gewürztraminer 2016 ($19.79 for 243 cases). It is rare to see a sparkling wine made with this grape, if only because the variety loses acidity as it ripens. The grapes for this wine must have been picked early because there is enough acidity to give the wine a crisp, dry finish. It begins with a fruity aroma that leads to flavours of green apple, kiwi and spice.  91.

Volcanic Hills Lava White Blend 2016 ($19.79 for 514 cases). This is a blend of 40% Pinot Gris, 20% Viognier, 18% Gewürztraminer, 10% Chardonnay, 7% Ehrenfelser and 5% Riesling Icewine. The wine has honeyed aromas and flavours of pear, mango and apple. The Icewine in the blend gives it 22 grams of residual sugar. The intensity of the Icewine makes the finish seem overly sweet. 88.

Volcanic Hills Viognier 2016 ($21.69 for 515 cases). The winery says this wine is “very pretty and very tasty.” I could not be more in agreement. It starts with a dramatic aroma of ripe apricot, leading to rich, luscious flavours of apricot and guava. 93.

Volcanic Hills Magma White 2016 ($15.90 for 515 cases). This wine is a blend of 48% Pinot Gris, 23% Viognier, 21% Gewürztraminer and 8% Ehrenfelser. The wine begins with herbal and spicy aromas that lead to flavours of pear, ripe apple and guava. There is a touch of residual sweetness but it is well balanced so that the finish seems dry. 90.

Volcanic Hills  Gamay Noir 2016 ($16.90 for 578 cases). This wine, made from mature estate vines, was aged five months in oak. It is a full-bodied wine with aromas and flavours of cherry that linger on the finish. 90.

Volcanic Hills Lava Red 2015 ($19.79 for 1,207 cases). This is a blend of 58% Zweigelt, 21.5% Merlot, 11.5% Maréchal Foch, 3% Gamay, 3% Cabernet Sauvignon and 1.5% each of Cabernet Franc and Pinot Noir. Each varietal was fermented separately and barrel-aged 15 months in American and French oak. Just before bottling, a modest quantity of Zweigelt Icewine was added. It has aromas and flavours of cherries, blackberries and plum. The Icewine gives it an off-dry finish. It is not a style I care for but, given the volume produced, the winery has a strong following for off-dry red wine.  88.

Volcanic Hills Syrah 2014 ($26 for 798 cases). The grapes for this wine are from Osoyoos. There is 5% Cabernet Sauvignon in the blend. The wine was aged 14 months in French and American oak. It is a bold and dark wine with classic aromas and flavours of deli meat, spiced plum, fig and black pepper. 92.

Volcanic Hills Cabernet Franc 2014 ($21.99 for 378 cases). Grapes for this wine were sourced in Oliver. The blend is 87% Cabernet Franc and 13% Merlot. The wine was barrel-aged 15 months in French oak (40% new). The wine shows the typical brambly aromas and flavours of a variety whose profile is on the rise. Decanting is recommended. 90.

Volcanic Hills Cabernet Sauvignon 2014 ($27.49 for 645 cases). Grapes for this wine were sourced from growers in the Similkameen Valley and from Oliver. The wine was aged 18 months in French and American oak. The wine begins with aromas of black currant and black cherry. Those are echoed on the concentrated palate, along with flavours of tobacco and dark chocolate. 91.

Volcanic Hills Eruption 2014 ($27.49 for 434 cases). This is a blend of 75% Merlot, 15% Cabernet Sauvignon and 10% Cabernet Franc. The grapes are sourced in both the Similkameen and the south Okanagan. The wine was aged 15 to 18 months in French oak. The wine begins with aromas of black currant. The palate is quite concentrated (decanting is recommended), with flavours of black currant, black cherry, dark chocolate and dark coffee. 90-92.

Posted by JohnSchreiner at Goodgrog at 9:23 AM