Little Engine shoots for the moon 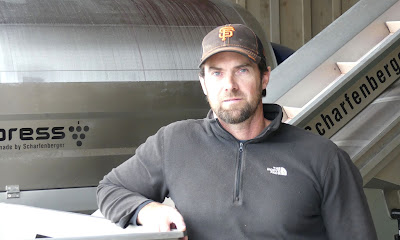 The bar is set high at Little Engine Wines, which has three tiers of wine – silver, gold and platinum. Silver is the entry level.

“I am trying to make silvers to compete with other people’s reserves,” winemaker Scott Robinson says.

He also acknowledges that the term, “reserve,” does not have the credibility that one would expect. The term is used rather loosely among wineries and there are no standards defining it.

“You can’t be cropping at six, seven tons an acre and call it a reserve,” he says. “If you have a reserve wine that costs $20 a bottle, how is that a reserve? In our first year, we called our golds reserve, but we quickly moved it to silver, gold and platinum for that reason.”

The winery made its first vintage in 2014 and opened its Naramata Road wine shop in 2016. As the estate vineyards come into production, the majority of the 4,000 cases being made each year is in the gold tier of quality. It is the ambition of Steven French, who owns the winery with his wife, Nicole, that the platinum tier wines will emerge as the volume leaders, at least in the best vintages.

Given the quality of the current releases, that is not an unreasonable target.

Former Calgarians, Steven and Nicole bought an orchard property in 2011 at the start of the Naramata Bench. Here, they built their home and, while doing that, replaced the fruit trees with vineyard. Subsequently, they bought a second property on Naramata Road for more vines and a winery. More recently, they acquired an adjacent property that has been planted primarily to Pinot Noir this spring. In total, they own or control about 25 acres of vineyard on the Naramata Bench.

Estate-grown grapes are critical to the quality of the wines that Little Engine  sets out to make. “That’s where we have 100% control over keeping the crops down: three tons an acre for Merlot and Chardonnay and two tons an acre for Pinot Noir,” Scott says.

From the start, Scott and the owners of Little Engine have had shared objectives. The winery’s labels, with a ladder reaching for the moon, clearly announce the ambitions. “Our family motto is ‘Dreams don’t come true; dreams are made true,’” Steven once told me. “If it takes a ladder to get there, don’t give up. It is just like the little engine that could.”

Scott’s first career was in kinesiology. In 2005, he began splitting his time between that career and working harvests in the Okanagan. In 2008, he enrolled in a master’s program in winemaking at the University of Adelaide. He considered staying in Australia until he was recruited in 2009 by La Frenz Winery, another star on the Naramata Bench.

He left La Frenz in 2012, intending to return to Adelaide for a doctorate but instead joined a Penticton businessman to open a small winery. When that partnership collapsed in 2015, he was recruited by Little Engine because, in Steven’s words, Scott is a “perfectionist.”

“From day one, when we met,” Scott says, “I said it has to be about the wine, because that is all I stand for. I am happy to be hiding in the cellar. I just want to make wine and the wine needs to speak for itself. I need the flexibility to produce the best wines.”

He gets that with superbly grown fruit and with the cellar tools that are key to making premium wines. The Little Engine cellar has, for a small winery, a significant amount of new French oak, including a number of larger format puncheons. These allow Scott to ferment and age the Platinum Chardonnay, for example, entirely in new oak without having oak flavours overwhelm the palate.

The winemaking is detail-oriented. Pinot Noir is fermented with indigenous yeast while cultured yeasts are used with Sauvignon Blanc, Chardonnay and Merlot. “I let them all start uninoculated,” Scott says. “I intervene on some of them, because with Merlot – and the same with Chardonnay – I am driving a specific flavour profile.”

The house style at Little Engine is wines – in every tier – that are packed with flavour. The reds are big in structure and bold in texture. The wines are approachable on release but clearly age-worthy. None is inexpensive but none is disappointing. Here, you get what you pay for.

Here are notes on the current releases. The platinum wines, for the most part, are limited to the winery’s wine club and to the tasting room.

Little Engine Sauvignon Blanc 2017 Silver ($30). This wine begins dramatically with aromas of lime and guava. On the palate, the fruit is intense, with layers of flavour – lime, apple and a medley of tropical fruits. The texture is rich, with bright acidity giving the wine a long and refreshing finish. 93.

Little Engine Chardonnay 2016 Silver ($30). The wine begins with aromas of citrus accented with a hint of toasty oak. The palate is rich with a medley of fruit flavours including citrus and apple subtly mingled with oak. The wine has a bright, fresh and lingering finish. 93.

Little Engine Chardonnay 2016 Platinum ($NA). This wine was fermented entirely in new French oak, including puncheons. The oak is well integrated, adding hints of toast to the buttery flavours of ripe mango and marmalade. The flavours are rich and layered, with a touch of spice on the finish. This is an elegantly polished wine. 95.

Little Engine Pinot Noir 2016 Silver ($35). This wine, which was aged in French oak (30% new), begins with aromas of cherry and strawberry. These are echoed on the palate, mingled with spice on the savoury finish. The ripe, silky tannins give the wine a velvet texture. 92.

Little Engine Pinot Noir 2016 Gold ($55). Half of this wine was aged in puncheons, with 57% of the barrels and puncheons new. The puncheons moderate the oak expression while softening the texture of the wine. There are dark fruit aromas. The palate is plush, with flavours of black cherry mingled with mocha and spice. The wine has the complex savoury flavours on the finish sometimes called “forest floor.” 94.

Little Engine Pinot Noir 2016 Platinum ($NA). Eighty-nine percent of this wine was aged in new oak, adding bold spicy aromas and flavours mingled with layers of spicy dark fruit This fleshy wine has both power and elegance, with a structure designed for a long life in the cellar. 94.

Little Engine Merlot 2016 Silver ($35). The wine begins with aromas of cassis and blackberry. The palate is packed with ripe flavours of black cherry, mulberry and black currant. There is a long finish with notes of spice and dark fruit. The texture is firm but the wine is approachable now. 92.

Little Engine Merlot 2016 Gold ($55). This is a muscular wine with powerful aromas of cassis and black cherry. On the palate there are flavours of black currant, black cherry and plum, with layers of concentration. Dark fruit flavours and spice persist on the long finish. 94.

Little Engine Merlot 2016 Platinum ($NA). This is a big, powerful wine built for long-term aging. It has aromas and flavours of black cherry, plum and fig with spicy dark fruit on the finish. The texture is rich and concentrated. 96.

Little Engine Rosé 2017 ($25). This is 70% Pinot Noir and 30% Merlot. Dark in colour, it has aromas of cherries and strawberries. On the palate, the wine has layers of fruit and delivers a lingering finish. 92.


Posted by JohnSchreiner at Goodgrog at 8:24 AM