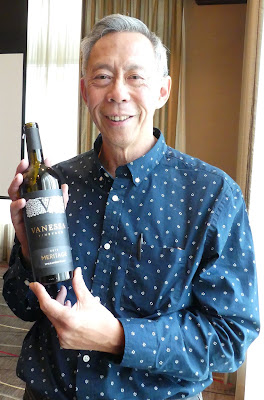 The slogan for Vanessa Vineyards in the Similkameen Valley is “carved from stone, fuelled by sun, a vineyard like no other.”

It is one of several neighbouring vineyards in the Similkameen that are producing exceptional ripe and full-flavoured grapes from their sun-drenched rocky slopes. None are quite as ruggedly rocky as Vanessa but all benefit from intense sunlight.

With its current releases, Vanessa compares the heat units at its property with the south Okanagan. In 2014, Vanessa had 1,920 growing degree days compared with 1,702 at Osoyoos.

In 2015, an even warmer year, Vanessa had 2,049 growing degree days compared with 1,764 at Osoyoos. Those two years bordered on the extreme for heat. The heat units at Vanessa in 2016 and 2017 were 1,757 growing degree days, more than enough to ripen fruit. The Viognier grapes were picked at 30 brix, yielding a wine with 14.9% alcohol.

There is no doubt that Vanessa – and much of the Similkameen - can produce wines that are powerful and intense.

Vanessa is a 75-acre vineyard planted in 2006 on a 220-acre property. Owners Suki Sekhon and John Welson had the first vintage produced for their winery in 2012. Vanessa Vineyards remains a small-lot producer, selling most of its grapes to Andrew Peller Ltd. The Vanessa wines on the market have  been made at the Peller-owned Red Rooster Winery by Karen Gillis, the winemaker there.

The Vanessa profile is rising. Last year, Vanessa opened a tasting room at its vineyard. Currently, that is the only retail outlet for the wines, other than the Vanessa wine club and a selection of premium restaurants.

Here are notes on current releases from Vanessa.

Vanessa Viognier 2017 ($24.99 for 200 cases). This is a ripe and luscious wine, the result leaving the grapes on the vines to mid-October for maximum flavour development. Apricot and peach aromas jump for the glass and lead to flavours of ripe apricot and guava. Good acidity keeps the flavours fresh. The finish goes on and on. 93.

Vanessa Rosé 2017 ($24.99 for 200 cases). This is a blend of 67% Merlot and 33% Syrah. Limited skin contact captured a delicate and appealing hue. The wine has aromas of cherry and raspberry leading to flavours of strawberry and watermelon. It is balanced to finish cry and crisp. 91.

Vanessa Cabernet Franc 2015 ($49.99 for 220 cases). This wine was fermented and aged 20 months in French oak (30% new). The brambly blackberry aromas mingle with nots of coffee, cherry and toasty oak. Dark fruit flavours of figs and dates framed by vanilla and spice coast the palate. 93.

Vanessa Cabernet Sauvignon 2015 ($NA for 195 cases). This wine is scheduled to be released in September. Decanting is recommended to allow the rich texture to emerge. The wine begins with classic mint and black currant aromas. On the palate, there are flavours of black currant and blackberry with coffee and dark chocolate on the finish. 92-94.

Vanessa Syrah 2014 ($N/A for 425 cases). The Syrah was co-fermented with 10% Viognier. The wine was aged for 20 months in new and second-use American and French oak barrels. Svelte in texture, the wine begins with aromas of plum and fig. On the rich palate, there are flavours of black cherry mingled with deli meats and spices, along with a touch of black pepper. 92.

Vanessa Meritage 2014 ($N/A for 775 cases). This is 37% Cabernet Franc, 35% Cabernet Sauvignon and 28% Merlot. Each varietal was fermented on its own and aged eight months in barrel. After the final blend was assembled, it aged another 12 months in American and French oak, of which 40% was new. It is dark in colour and bold in flavour. It begins with aromas of vanilla, black cherry and richly spiced dark berries, all of which is echoed on the palate. The finish is generous and long-lasting. 94.

Posted by JohnSchreiner at Goodgrog at 2:28 PM