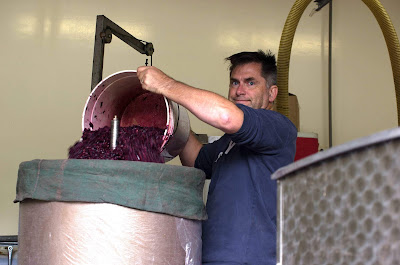 Rocky Creek Winery recently announced a milestone: its wines have won 100 medals since this Cowichan Valley winery opened 13 years ago.

That achievement was all the more satisfying because of what co-proprietor and winemaker Mark Holford had been through in recent years.

“For the past couple of vintages,” writes Linda Holford, his wife and co-owner, “the winery has suffered some dramatic challenges with [Mark] Holford struggling after a serious car accident in the winter of 2015-2016 sidelined him for three months. This resulted in being behind in the vineyard and the winery for an entire year.”

She continued: “It showed in the wines. They were good but missed that special something that differentiates a good wine from a great wine. A year later Mark was back on his feet. The winery had a much improved year in 2017 and the recent awards are reflecting that.”

For background on the winery, here is an excerpt from John Schreiner’s Coastal Wine Tour Guide.

“Ever since I was in my early teens, I helped my dad make wine,” Mark recounts. “He did a lot of amateur winemaking and my grandfather in England did a lot.” That skill made him popular at university when he agreed to make wine and beer for his friends as well. It dawned on his that this “could be something I could do as an occupation.”

Born in Deep River, Ontario, in 1968, Mark is a chemical engineer with a master’s degree in environmental engineering. He met Linda in Calgary, her hometown, when he was completing a co-operative studies assignment with an oil company. She is an engineering technologist with management skills gained in the oil industry. They spent two and a half years in Sarnia where Mark worked in the Shell petrochemical plant.

“But we always wanted to come to Vancouver Island,” says Linda. “When we were in Calgary, we wanted to get a job [here] and an opportunity happened first in Sarnia.” In the fall of 2001 Mark and Linda were vacationing in Victoria, where Linda’s retired parents lived, when he found a position at the pulp mill at Crofton. They bought a home nearby in Ladysmith. Plans for a winery were put on hold because there was no room for a vineyard on their suburban street. Then they discovered they could get a commercial license and make wine with purchased grapes. Rocky Creek opened in 2005, making 600 cases with grapes from a vineyard at Chemainus and with purchased wild blackberries. Their first release was a port-style blackberry wine – which also won the winery its first medal.

Linda and Mark … figured out that small wineries are more profitable with a land-based license (because government takes much less in taxes and charges). In the winter of 2008 they moved to a three-hectare (7½-acre) farm in the Cowichan Valley, on a property almost back to back with Venturi-Schulze Vineyards.

Mark’s recovered health was not the only reason the 2017 wines improved. “Last year we invested in new equipment to help ensure the quality of our wine would consistently please our customers,” Rocky Creek said in a statement. “New tanks, barrels and a new filter unit – all designed to ensure our wines would have excellent quality every year.”

Here are notes on current releases from Rocky Creek.

Rocky Creek Pinot Gris 2017 ($20 for 550 cases). The delicate pink hue of this wine is the result of 16 hours on the skins. The wine has aromas and flavours of grapefruit and apple. The finish is crisp and refreshing. 90.

Rocky Creek TLC 2017 ($22 for 350 cases). This is a blend of Madeleine Sylvaner, Viognier, Albariño, Siegerrebe and Ortega. The wine begins with floral aromas.  On the palate, the flavours mingle tropical fruits with a medley of herbs. The texture is luscious. 90.

Rocky Creek Robin’s Rosé 2017 ($22 for 180 cases). Made with Pinot Noir, this wine has a vibrant, inviting pink hue. It begins with aromas of cherries, echoed on the palate along with wild strawberry notes. It is tangy and crisp on the finish. 88.

Rocky Creek Pinot Noir 2015 ($25 for 200 cases). The wine begins with aromas of spice and smoke, leading to flavours of cherry and red currant. 87.

Rocky Creek On the Mark NV ($22 for 300 cases). This is a six-grape blend: Cabernet Foch, Pinot Noir, Maréchal Foch, Tempranillo, Malbec and Carménère. The nose recalls an oak-aged Rioja, with notes of oak, fig, plum and cherry that are echoed on the palate. 90.

Rocky Creek Wild Blackberry NV ($25 for 800 cases of 500 ml bottles). This port-style dessert wine (16% alcohol) is a Vancouver Island tradition. The aromas and flavours of fresh blackberries are intense. A dash of sparkling soda would turn this into a refreshing summertime drink. 89.

Posted by JohnSchreiner at Goodgrog at 10:28 AM