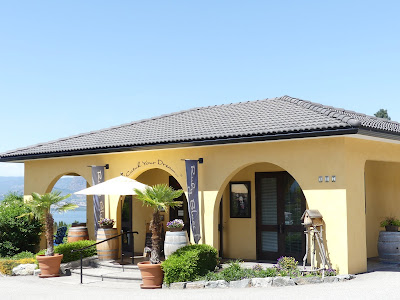 In the decade since it opened, Ruby Blues Winery has established a clearly-defined house style with wines that are easy to like.

That seems to reflect the personalities of the winery’s owners, Prudence and Beat Mahrer. In an era when tasting room fees are routine, Ruby Tuesday only asks that its guests smile. If they are not smiling when they arrive, they are certain to be smiling by the time they leave.

The style also reflects how winemaker Blair Gillingham makes the wines.  “It is a Ruby Blues style: you open the bottle and you can just keep drinking it,” he says. “You don’t have to have food, you don’t have to do anything. You can just open it and enjoy it with your friends and family.”

He continues: “I am making Okanagan wines here. People drive in, they buy a bottle, drive out and drink it. So let’s make it for that for now; and eventually we can evolve with our customers. Sure, we have reserve style wines which will take a few years but for the most part, why not make a wine and sell it.”

That is not to suggest that the wines at Ruby Blues are simple. Anything but. Blair is a detail-oriented winemaker. His wines have won major awards, including four Lieutenant Governor’s Awards in five years.

Blair (below) was born in Kamloops in 1981 and grew up in Victoria. “I took a year off between high school and university,” he says. “My plan was to go to Japan and teach English. That did not work out, so I went to Australia. I got to do a lot of surfing; I had a job at a ski hill. I was in Sidney during the Olympics, working there.” 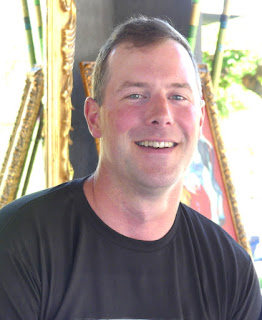 He made friends with a family that had a winery in the Hunter Valley. He visited them during harvest and his wine interest was born. When he returned to Canada, a sister who was working in a wine shop suggested he should move to the Okanagan, work in a winery and take winemaking courses.

He began by working the harvest at Sumac Ridge in 2001 and went on through a variety of roles – but none that seemed to be leading to winemaking. He enrolled in some winemaking courses in the Okanagan as well but was not satisfied he was learning enough. “I had opportunities to travel again and work overseas, so I went to New Zealand and worked the harvest there at Kim Crawford in 2006.”

Blair returned to the Okanagan to a job at Jackson-Triggs Winery. He stayed there until 2010 before he decided to go overseas again. “By late 2009, I had decided I needed to expand my wings and gain more knowledge of the wine industry as a whole,” he says. “So I thought, let’s go to Germany, let’s learn how to make some Riesling.”

He had a contact in Germany, Johannes Hasselbach from Gunderloch Winery. They had met when the German was working the 2006 harvest at Jackson-Triggs. Johannes referred him in 2010 to one of the leading wineries in Austria, Weingut Jurtschitsch.

“Since I had just come off working two harvests in Australia, they said, great, you can make our red wine,” Blair says. “Over a period of time, I became a junior kellermeister. I worked with the cellar master and we oversaw all the operations in the cellar.”

He spent two years in Austria before he decided to return to the Okanagan in 2012. Bill Eggert at Fairview Cellars gave him a job. “I worked at Fairview for a year and a half. That was a solid year and a half,” Blair says. “I definitely learned a lot working with Bill. I really respected what he was doing. The red wines are amazing. I even had an opportunity to plant some Grüner Veltliner on his Crooked Post property at Gallagher Lake.”

Leaving Fairview Cellars early in 2014, Blair went back to New Zealand to work the harvest and pile on more experience. “During that time, I had been interviewing with Ruby Blues,” he says. “I came back from New Zealand, came here and got the job.”

His experience on three continents has equipped him with what amounts to a graduate degree in hands-on winemaking. It shows in the consistent quality and predictable style of the wines at Ruby Blues.

Ruby Blues Forever Young Chardonnay 2017 ($23). Forever Young comes from the lyrics of a song – but this is also a wine with a refreshing youthfulness. The wine was fermented in stainless steel, with 7% of it fermented in barrel for additional complexity. The aromas and flavours of peach and apple just dance on the palate. The fruity flavours persist on the finish. This is the first Chardonnay table wine at Ruby Blues. 91.

Ruby Blues Pinot Gris Commune 2017 ($20). The term “Commune” means that grapes are from several vineyards. This expressive wine captures the vibrancy of Naramata Pinot Gris, with aromas of citrus and pear and flavours of pear and peach. The finish is crisp. 91.

Ruby Blues Viognier Commune 2017 ($25). The winery is a master of Viognier, having won four Lieutenant Governor’s Awards with this variety. This is a rich and tropical wine, beginning with aromas of peach and apricot that are echoed on the palate. Bright acidity gives the wine appealing freshness on the finish. 92.

Ruby Blues Gewürztraminer Commune 2017 ($20). The grapes for this wine are from 38-year-old vines and that accounts for the intensity of the aromas and flavours. The wine begins with floral and spicy aromas that lead to flavours of grapefruit and lychee. 91.

Ruby Blues White Stiletto 2017 ($20). This is a blend of Pinot Gris, Pinot Blanc, Gewürztraminer, Riesling and Muscat. The wine is crisp and fresh, starting with aromas of citrus and spice. On the palate, there is a fruit bowl of flavours – melon, peach, green apple – with a touch of spice on the finish. 91.

Ruby Blues Peace & Love & Bubbles NV ($25).  This wine was judged the top Canadian sparkling wine in competition at this summer's All Canadian Wine Championships. This drinkable sparkling wine just cries out for a picnic in summer. The wine gets its pink hue from the Merlot in the blend. The other varieties in the blend are Pinot Blanc and Gewürztraminer. The wine is fresh and juicy, with aromas and flavours of raspberry and rhubarb. 90.

Ruby Blues Pinot Noir Reserve 2016 ($50). This is the winery’s first Pinot Noir, made when two barrels in the cellar stood out for their richness and depth. The wine spent two months in new oak barrels and 14 months in older barrels. It has aromas of cherry mingled with toasty oak. It is silken in texture, with flavours of cherry and strawberry. 92.

Ruby Blues Red Stiletto NV ($25). This is the winery’s signature red, made in an easy-drinking style and a blend of two vintages, with the younger vintage contributing fresh fruit flavours. It is a blend anchored with 35% Syrah, fleshed out with Merlot, Cabernet Sauvignon, Pinot Noir and Dunkelfelder. The wine begins with lovely aromas of cherry, vanilla and cloves, leading to spicy flavours of red berries. 90.

Ruby Blues Black Stiletto 2016 ($35). This wine was first made in 2013 in response to customer demand for a more age-worthy wine than Red Stiletto. The blend here is 38% Syrah, 20% Merlot, 15% Cabernet Sauvignon, 12% Pinot Noir and 15% Dunkelfelder. The wine was aged 16 months in barrel and has a firm (but not hard) structure.  It begins with aromas of black currant and cherry which are echoed on the palate. The finish is filled out with dark chocolate flavours. 92.

Ruby Blues Late Harvest Chardonnay 2014 ($35 for 375 ml). This is a rare dessert wine from Ruby Blues. The grapes were picked under Icewine conditions but were allowed to warm a touch before the juice was pressed. The wine is plump with honeyed flavours of ripe mango and peach. Good acidity gives the wine a clean and fresh finish. 90.

Posted by JohnSchreiner at Goodgrog at 10:25 AM