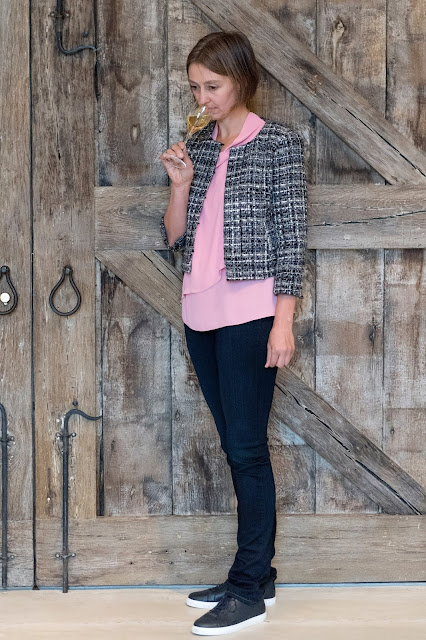 Victoria-born Cherie Spriggs is one of the best winemakers to have grown up in British Columbia – but she got away from us.

She has just been named “Sparkling Winemaker of the Year” at the recent International Wine Challenge in London.

“It must be one of the – if not the – most amazing award a winemaker could get,” she writes. “What is so astonishing is that this is the first time that anyone outside of Champagne has won, and the first time ever a woman has won.”

The bad news is that you need an aeroplane ticket to taste her wines. She is the chief winemaker Nyetimber Vineyard, the pioneering West Sussex producer of sparkling wine in England, where she has worked for 11 years. She won four gold medals for sparkling wine at the IWC competition – along with an impressive list of awards over the years.

In a statement after receiving the award, Cherie said: “The award is not only a great achievement for Nyetimber, but also gives an indication on the direction this industry is headed. What is being achieved today here in England, by English wine producers, and particularly by Nyetimber, is significant as it has never been done before outside of Champagne.”

The 16-hectare vineyard at Nyetimber was planted between 1988 and 1991 with Chardonnay, Pinot Meunier and Pinot Noir, the classic varietals for making Champagne. The winery was launched by Sandra and Stuart Moss, two Americans who believed that southern England had the soils and climate in which to grow wines rivalling Champagne.

Their first release was a 1992 Première Cuvée, a blanc de blanc from Chardonnay. It won a gold medal at the 1997 International Wine & Spirits Competition. Once the Mosses had the winery on its feet, they sold it to the current owner and chief executive, Eric Heerema. He is the owner who hired Cherie Spriggs and her winemaker husband, Brad Greatrix.

Cherie grew up in Langford on Vancouver Island. She was torn between science and classical music as a career, having studied piano. But an honours Bachelor of Science (in biochemistry) from Queen’s University in 2000 set the direction for her future.

“When I met my now husband during my biochemistry degree at Queens, his parents introduced us to the pleasure of sharing wine,” Cherie recounts in an interview. “They had a lovely habit of opening a nice bottle of wine on a Friday evening and spending time together. Later we had the chance to vacation in Burgundy and absolutely fell in love with the artistry of wine.”

The University of British Columbia had just started its Wine Research Centre and was recruiting master’s students. Cherie and Brad both signed up in 2001.

“This was an amazing experience,” Cherie remembers, “but ultimately we decided that we wanted to make wine, not study it.”

In 2004, they enrolled at the University of Adelaide for graduate diplomas in enology – degrees they completed in one year because of the strong science background both already had.

In 2006, having made wine at wineries in Australia, New Zealand and Oregon, Cherie was looking for winemaking opportunities in British Columbia and elsewhere. Andy Johnston, the proprietor of Averill Creel at Duncan, hired her for the 2006 harvest. He remembers her as “a marvellous winemaker.”

“She made my 2006 Pinot Noir,” Andy says. “She showed up in my vineyard and we were talking. Her job in Burgundy had not materialized. I said, ‘What are you doing for the harvest? Would you like to work here?’ And she did.”

At the time, Averill Creek did not have the budget for a full-time winemaker, let along a winemaking duo. So in February, 2007, Cherie and Brad applied at Nyetimber and were both hired (Brad, now the associate winemaker at Nyetimber, had worked the 2006 harvest at Chateau Margaux in Bordeaux).

“My father was born in Cambridge and therefore I have always held dual citizenship,” Cherie continues. “During our studies at UBC Mom and Dad, who still live in Canada, were taking a vacation to England. I asked Dad to bring me back a bottle of Nyetimber, having heard of it in Jancis Robinson’s wine atlas. Brad and I tasted the wine, and while it wasn’t perfect, we could see incredible potential in it that we hadn’t seen in sparkling wine anywhere else in the world outside of Champagne.”

When she was at the University of Adelaide, Cherie found that she was particularly attracted to the sparkling wine process. “It is just that much more challenging of a wine to make, plus I really enjoy drinking sparkling wine.”

She and Brad had begun looking for winemaking opportunities in the Okanagan in 2007 when her husband suggested that they should apply for “dream jobs” even if they thought it unlikely they would get them.

“The first thing that entered my head was the memory I had of the potential to make sparkling wine in the UK. So I wrote Nyetimber to ask if there was enough of a wine industry in the UK to warrant moving there and looking for work,” Cherie says. “The lady in the cellar explained that the CEO [Eric Heerema] had been looking for six months for a winemaker. In fact they needed two people.”

Cherie and Brad both sent their resumés to Nyetimber and, after two telephone interviews, were offered jobs. They have been at Nyetimber since early 2007.

Cherie has been nominated twice before for the winemaker of the year award, finally breaking through this year.


Posted by JohnSchreiner at Goodgrog at 3:40 PM