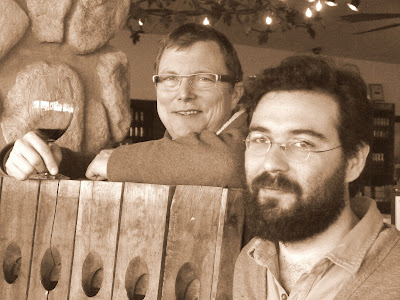 Summerhill Pyramid Winery will be releasing an organic sparkling wine after winemaker Eric von Krosigk figured out how to get organic liqueur d’expédition and liqueur tirage.

Most of Summerhill’s wines are organic. It was a matter of considerable frustration that its sparkling wines – the major portion of the winery’s production – could not also be labelled organic due to a technicality.

Eric found that organic cane sugar is readily available but not acceptable. “Organic cane sugars are all brown and they all have molasses,” he says. “The wine tastes like it was stored in a garden hose for the summer.”

“We finally found an organic sugar from France that is grape sugar,” says Summerhill president Ezra Cipes. As we stand in the winery’s massive new cellar, he gestures: “This is the first batch of sparkling wine made with organic sugar. We will finally be able to have the organic logo on the wine.”

The 20,000 square-foot cellar and warehouse was built last year, part of a major expansion to accommodate the many visitors the winery welcomes.

“We certainly are the most visited winery in BC,” Ezra believes.  He estimates that Summerhill averages between 1,000 and 3,000 visit0rs daily throughout the year.

“We have long since outgrown our quite large wine shop,” he says. A gazebo tasting room was added last year. Two other tasting rooms are being added this season, along with tastings for those who tour the winery’s pyramid. As well, the winery has an expanded picnic area where visitors can buy deli lunches and wine by the glass. That supplements the winery restaurant for visitors who do not have time for elaborate dinners and lunches.

“One of the big opportunities is the lunch,” Ezra says. “Some people want to sit down and have a wine-paired multi-course meal; and some just want a sandwich before they get on to the next winery. So our picnic menu will be a nice option.”

And there is more. “We are also introducing a number of remote tasting locations in the garden and by the heritage house for pre-booked groups and tours,” Ezra says. “I think that will make a huge difference in the experience of coming here.”

The winery is also planning a demonstration area in the cellar where the sparkling wine process can be explained, no doubt with a glass of bubble in hand. 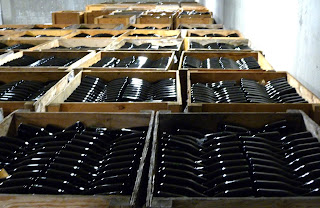 “We want to set up a little interpretive display around the disgorgement of wines, so that people can understand it,” Ezra says. “I think it will impress upon them how much investment is made in sparkling wine when they see how much has to be cellared; and how it sits so long. We have 6,000 square feet, absolutely packed with bottles.”

That is one-third of the new cellar. The other two-thirds accommodates up to 900 barrels and a number of oak fermenters, including nine oak fermenters, each with a capacity of 10,000 litres. These were shipped from Italy, disassembled in the fall of 2014 and were put together by a team of coopers from the supplier.

These are likely to change the style of some of Summerhill’s red wines.  “We have just started releasing wines from the 10,000 litre casks and they are exciting,” Ezra says. “The idea is to bottle them younger. We fermented our 2015 Foch in the large tanks. Instead of transferring it to barrels and letting it sit, we bottled it young and let it bottle age. Those tanks impart a nice quality of vibrancy and youthful style.”


Posted by JohnSchreiner at Goodgrog at 2:38 PM