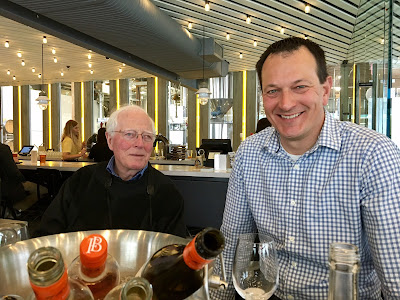 
Riesling is something of a signature wine at Fort Berens, perhaps because Rolf de Bruin, one of the owners, is a dedicated fan of dry Riesling.

“We have always had a Riesling but this was the first year that we had the opportunity to make two different Rieslings,” Rolf says. “I always wanted to make a dry Riesling. That is what we set out to do back in 2011 when we made our first vintage.”

In that vintage and in the 2012, fermentation stopped before the Riesling was totally dry. However, the wines were so well received in the market that Fort Berens continued to release the off-dry version every successive vintage.

“The way it comes out in the Lillooet terroir is super tropical,” Rolf says. “There are a lot of lychee and guava flavours, which is fairly unusual with cool climate Rieslings.”

Most consumers would not consider the wine off-dry because the amount of residual sugar is modest and is balanced with good acidity. The 2016 “regular” Riesling has just seven grams of residual sugar. It adds texture to the wine but the sweetness is barely noticeable.

But Rolf still wanted a dry Riesling. He told winemaker Danny Hattingh, who joined Fort Berens in 2014, about the previous stuck ferments. Danny made trial lots of dry Riesling in 2014 and 2015 just to prove it could be done. The trial lots were then blended with the regular Riesling, because the winery’s production was not large enough for a separate bottling.

“In 2016, we had enough volume,” Rolf says. “We decided to make two Rieslings. 2016 is the best vintage of the last three. I think we are dialling in the vineyard a bit better as Danny and Megan learn how to make wine and grow grapes in Lillooet.”

Rolf and his wife, Heleen Pannekoek, pioneered commercial wine growing in Lillooet by planting a 20-acre vineyard in 2009 and subsequently by building a handsome winery in 2014. Over the next two years, another 20 acres of vines will be planted. As well, Fort Berens soon expects to be getting Pinot Gris and Pinot Noir from a new vineyard at nearby Lytton.

The reference to Danny and Megan is to the youthful South African couple who are having a major impact at Fort Berens. 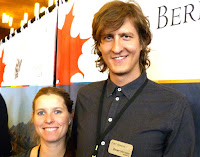 “Megan DeVilliers and Danny Hattingh (right) work together as a team,” the winery explains on its website. “Megan is our vineyard manager and viticulturist while Danny is our winemaker. Megan a bachelor’s degree in viticulture at the University of Stellenbosch through the Cape Institute for Agricultural Training, including cellar technology and plant production. Before moving to Lillooet with her winemaker partner Danny, Megan worked at vineyards on Vancouver’s coastal islands and the Okanagan.”

Danny has degrees in viticulture and enology from an institute at Elsenburg in South Africa. He has been the winemaker at Saturna Island Vineyards and at several Okanagan wineries. He has also worked in South Africa, Oregon and Washington.

“When Danny and Megan came aboard, we hired them to come in with an open mind,” Rolf says. “We wanted them to come in and find out how we could fine tune things at Lillooet, to highlight Lillooet. They are young, they have had a bunch of experience but not in one particular region where they got fixated on certain ways and means and rules.”

Rolf believes that “Riesling is making a comeback. A lot of consumers are getting more educated of Riesling. It is not always sweet. Pinot Gris is the most widely planted white varietal [in BC] and we make an awesome Pinot Gris, but I think the Rieslings are more interesting. If you look at a signature variety for BC, I think it can Riesling.”

Lillooet also is turning out to be good Riesling terroir, producing grapes with good sugar, good acidity and singular tropical flavours. “We are helped because the diurnal temperature swing is huge,” Rolf believes. “In 2015, on the first full moon in September, it was 32◦C in the day and 2◦C at night.” He puts that down to the rugged terrain and high mountains towering over Lillooet.

Here are notes on the four 2016 wines released recently by Fort Berens.

Fort Berens Pinot Gris 2016 ($17.99). This delicious wine is packed with fruit – aromas and flavours of apples and pears with a hint of anise on the finish. The wine is crisp and refreshing. 91.

Fort Berens Riesling 2016 ($16.99). The seven grams of residual sugar are balanced by nine grams of acidity, giving a perception of dryness without austerity. There are aromas and flavours of tropical fruit, along with grapefruit and a spice of minerality. The finish is refreshing. 90.

Fort Berens Dry Riesling 2016 ($18.99). The wine is fresh and tangy, with hints of lime in the aroma and on the palate. The generous weight on the palate support flavours that linger. The finish is dry but not austere. The wine is good now but will be even better with a few years of bottle age. 91-92. 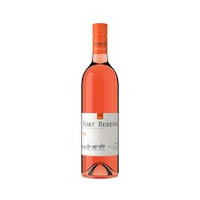 Fort Berens Pinot Noir Rosé 2016 ($17.99). Two and a half days of skin contact before fermentation have given this wine a delicate rose petal hue. It has aromas and flavours of strawberry. The texture is silky but the finish is dry and refreshing. 90.

Posted by JohnSchreiner at Goodgrog at 3:49 PM