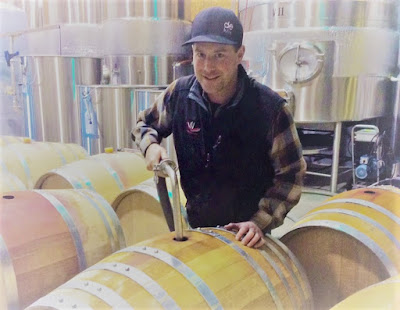 Ruby Blues Winery remains one of the few wineries without a formal tasting fee. Owner Prudence Mahrer insists only that visitors smile.

There are plenty of reasons to smile when visiting this Naramata Bench winery. It starts with the funky rock music emanating from speakers amid the vines, reflecting the musical tastes the owner developed in the 1960s. Then there are the spiky high heels on sale in the wine shop.

The smile will really become wide in tasting the wines, which invariably are packed with flavour. The winery’s numerous awards include four Lieutenant Governor’s Awards of Excellence for previous vintages of Viognier. 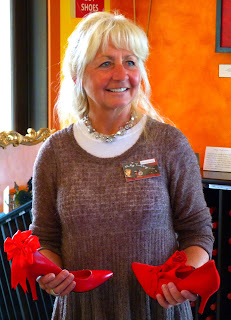 Prudence Mahrer is an effervescent personality who grew up with the music and culture of the 1960s. That included a Rolling Stones song, Goodbye Ruby Tuesday, about a free-spirited young woman following her dream. That inspired the name of the winery when, following her dream, she convinced her husband, Beat, to launch their second Naramata winery in 2008. Unfortunately, an American restaurant chain with 900 locations, Ruby Tuesday’s, has been around since the 1970s (with a single Canadian location in Niagara Falls). When they objected, Prudence renamed the winery Ruby Blues in an apparent allusion to a Beatles song. “Some of the songs from the Sixties have so much meaning in them,” she believes.

, which opened in 1997, was their first. They sold the chateau-styled winery in 2005 to Andrew Peller Ltd., intending to retire. They travelled in winter and piloted their floatplanes in summer. Prudence, who also spent the summers running their 5.6 hectares (14 acres) of vineyard, soon discovered how much she missed the winery and meeting the public. Had there been a support group for ex-winery owners, she says, she would have joined it. That is why at 55 (she was born in Switzerland in 1953), she persuaded her husband to start Ruby Tuesday. “That’s the reason why I wanted to start again,” she says. “I can easily do another 10 to 15 years.” Believe it: she and Beat are remarkably athletic, having run fitness centres in Switzerland.

Ruby Blues, with an annual production between 2,000 and 3,000 cases (all from Naramata Bench fruit), never will be as large as Red Rooster (16,000 to 20,000 cases). Prudence found that there had been far too much administration and not enough contact with clients. “I want to do what I really loved the most – producing wine, quality wine of course; and then selling it myself to customers,” she says. Winemaker Lyndsay O’Rourke, who trained in New Zealand, is a rising star among Okanagan winemakers, having mentored with consultant Philip Soo.

The tasting room at Ruby Blues sparkles with Prudence’s personality. The tasting fee? “The cost for a tasting is a smile,” has become the winery’s slogan. If you are not smiling, she will tease one out of you, perhaps by trying to sell a pair of shoes. The wine labels have always included the red stiletto shoes that Ruby Tuesday might have kicked off to chase her dream. In 2011 Prudence ordered 170 pairs of ladies’ shoes from a cobbler in Vietnam.

Since that was written, Lyndsay moved on to devote full time to nearby Tightrope Winery, operated with her husband, Graham. Before she left, however, she mentored Blair Gillingham, the current winemaker at Ruby Blues. Born in Victoria, he was drawn to wine after working a harvest in the Okanagan in 2001.

The Ruby Blues web site picks up the story: “Since then, Blair's experience has covered the Okanagan Valley, Australia, New Zealand, and two years in Kamptal, Austria. His biggest challenges were to work thee harvests in one calendar year in two different continents, and learning different languages in Europe for work and enjoyment.”

Ruby Blues sells most of its wine from the tasting room. A number of private wine shops in BC also carry the wines. There is a complete list on the Ruby Blues web site.

Ruby Blues Gewürztraminer 2016 ($20 for 762 cases). The grapes for this wine are from a 38-year-old planting and it shows in the intensity of the aromas and flavours. The wine begins with aromas of rose petal, spice and grapefruit, with spice, citrus and lychee flavours. The wine is balanced to a dry finish but it is so fruity that my tasting companion thought it to be off-dry. 90.

Ruby Blues Pinot Gris 2016 ($20 for 925 cases). This is a thespian Pinot Gris, beginning with bold aromas of pears and apples. The palate delivers intense flavours of pear, guava and ripe apples. The dry finish is refreshing. 91.

Ruby Blues Viognier 2016 ($25 for 702 cases). This begins with aromas of Asian pear, apricot and spice, leading to flavours of stone fruit. The wine is clean and fresh with a laser-like focus on the palate. The intensity of flavour is surprising, since the alcohol is just 12.5%, somewhat on the moderate side for this variety which usually develops flavours only with prolonged hang time. Perhaps this reflects the 2016 vintage: bud break was unusually early, making for a long season for flavour development. The pick dates for the three vineyards that supplied the grapes were October 11, October 13 and October 28. The winemaker extracted more flavour with an 18-hour cold soak of half of the crushed berries before pressing. 92.
Posted by JohnSchreiner at Goodgrog at 4:20 PM