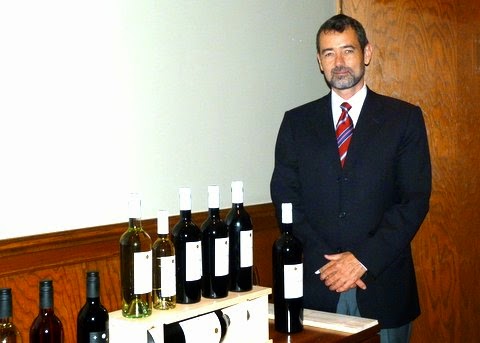 Last week, when the Canadian Navy banned alcohol on its ships at sea, I immediately thought of Spencer Massie, the senior partner in Clos du Soleil Winery in the Similkameen.

He is a naval veteran, having retired in 2000 as a lieutenant commander, after 22 years. During his career, he developed a keen interest in wine, often organizing on-board tastings, at least with fellow officers.

When I first interviewed him in 2008, he recounted some of his shipboard encounters with the grape.

“I was the second-in-command, executive officer, on a mine-sweeper on this coast when I was 25 years old,” Spencer told me. “One of my fellow ex-o’s and I, we were both into wine even back then. Normally, the ship would carry a few cases of ordinary wines. He and I were splitting cases of Margaux and things like that. We were in charge of ordering all the bonded storage. There are opportunities within the military where you can experiment and have some fun.”

Well, at least there were.

Spencer had a rationale for organizing wine tastings. “I thought it was important for our young officers to tell the difference between a tawny and a vintage Port, and what it takes to create a good bottle of wine,” he said.

Perhaps the officers who took over when Spencer retired in 2000 did not think it all that important to teach sailors how to drink. The ban was caused by sailors who over-indulged and got into so much trouble that they almost caused an international incident. It is quite probable those sailors never had a chance to develop a palate remotely as sophisticated as Spencer’s.

They might not appreciate the excellent wines coming from the winery which Spencer (and partners) launched in 2008.

The current releases from Clos du Soleil are the wines with which I will toast the navy’s (understandably) vanishing tradition. There will still be opportunities to enjoy the occasional drink on board – on special occasions. It will be a brave captain who will risk having too many special occasions.

Those of us safely on land, however, get to enjoy these wines. Here are my notes.

Capella 2013 ($27.90 for 12 barrels). This barrel-fermented wine is 91% Sauvignon Blanc and 9% Sémillon. It begins with lovely aromas of grapefruit and quince. On the palate, the wine is crisp and refreshing, with herbal notes underlying flavours of lime. The model is white. I think this is better, with more intense flavours. 92.

Clos du Soleil Growers Series Guild Merlot 2012 ($24.90 for 125 cases). The grapes for this wine are grown by the Guild family in a vineyard near Keremeos. This is a big, ripe wine with aromas of cassis and vanilla. It delivers flavours of black and red currants with a hint of raspberry. 90.

Clos du Soleil Signature 2012 ($44.90 for 19 barrels). This is 48% Cabernet Sauvignon, 42% Merlot, 9% Cabernet Franc and 1% Petit Verdot. The wine was aged in French oak barrels for 18 months. It begins with an aroma that envelops you with spice, black cherry and cassis. On the palate, there are complex flavours of black currants, dark chocolate, tobacco and espresso with a touch of cedar on the finish. The long, ripe tannins will carry this wine – even though it is drinking well now – for another 10 years. 93-95.

Clos du Soleil Saturn 2013 ($28.90 for 230 cases of 375 ml). This is sensational late harvest Sauvignon Blanc, The intensely honeyed aromas of sweet fruit jump from the glass. On the palate, there are honeyed flavours of citrus, ripe apricot and pineapple. There seems to be a touch of botrytis here, creating an intense and lingering finish of honey and tobacco. I reviewed this before its release in the spring. More time in bottle has taken the wine to an even higher plateau. 92.
Posted by JohnSchreiner at Goodgrog at 12:18 PM