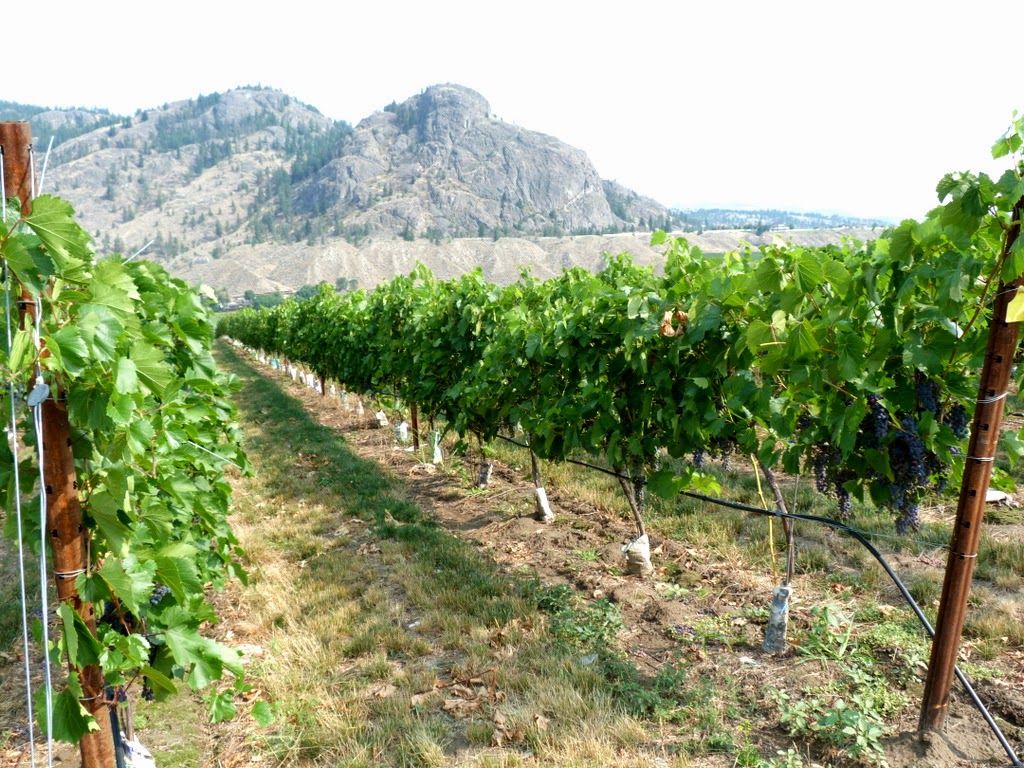 Monte Creek Ranch, the newest winery in , has a lot of pioneering history behind its name – and also is pioneering grape varieties new to British Columbia.

Monte Creek is the fourth winery near . Its current portfolio of seven wines includes a number made with so-called hybrid grapes. These varieties were developed in and to survive winter temperatures fatal to vinifera varieties. Most of the wineries in grow them but this is the first release of these varietals from a vineyard.

Some of the history was laid out in a news release that announced the winery:
“Generations back, the small community of Monte Creek, situated east of along the and into the rolling hills, was known as "Ducks", after the British settler Jacob Ducks, who ranched the area extensively.

“The town became a hub when Ducks opened a hotel to room railway workers, miners and other ranchers, and achieved fame in 1906 as the site of the last train robbery by the notorious "Gentleman Bandit" Bill Miner. In 1888 Hewitt Bostock purchased 3,380 acres near from rancher Ducks. Years passed, yet locals continued to call it Ducks Ranch long after Bostock and his wife made it their home. Today's Monte Creek is a tiny community where farming and ranching is still the mainstay.”

The picture of Bill Miner, apparently from a wanted poster, appears on several of the winery’s labels.

Here is the profile from the new edition of John Schreiner’s Okanagan Wine Tour Guide.
Marquette, and Frontenac have joined the lexicon of varietals in with the development of this winery. Those are winemaking hybrids bred at the of to survive winters as frigid as those experienced occasionally at . In an abundance of caution, Gurjit Sidhu, the owner of Monte Creek, also has installed wind machines for added protection against late spring and early autumn frost.

Since 2010, Monte Creek has planted about 14 hectares (35 acres) on two vineyards: a south-facing slope called Lion’s Head on the north flank of the Thompson River; and a windswept plateau south of the river and beside the highway (where the winery and wine shop are located). In addition to the hybrids, Monte Creek also has a large block of Maréchal Foch. On the Lion’s Head slope, Riesling, Pinot Gris and Gewürztraminer are grown.

The first commercial production from this vineyard, about 23 tons in 2013, was vinified for Monte Creek by Eric von Krosigk, the winemaker at Summerhill Pyramid Winery. The wines are promising, in part because the hybrids, which have big berries when grown in eastern , produce small berries with concentrated flavours in the climate and soils. , which the says is a “grandson” of Pinot Noir, is medium bodied with good flavours. Le Crescent, which has some in its ancestry, yields a fruity white. “We have at least two very strong ones,” Gurjit says of the gamble on hybrids.

The Sidhus are immigrants from the Punjab in who have already succeeded in horticulture in . Gurjit was just three when his father Gurdev moved the family to in 1969. Unable to use his law degree here, he   started a small plant nursery in in 1975. Today, Sidhu & Sons Nursery Ltd., specializing in producing shrubs and trees for landscaping, is one of ’s largest nurseries.

In 2001, the Sidhus expanded to growing blueberries, quickly becoming one of the largest producers in the . Soaring land prices sent Gurjit, who has a diploma in horticulture, looking for cheaper farm land in the interior to plant more blueberries. In 2007 he bought Monte Creek Ranch and then the Lion’s Head Ranch on the north side of the river, almost directly across the valley. Because the is not ideal for blueberries, he turned to grapes and a groundbreaking trial of hybrids that could open winegrowing possibilities in ’s cooler regions.

Since that was written, the winery has built a processing facility in which a tasting room will open in the spring of 2015. 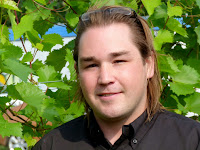 As well, Michael Alexander, 25, (right) a Calgarian who is completing his training this winter at , has become the winemaker (with Eric remaining as a consultant. Michael, who had previous experience in both the cellars and the tasting room at Summerhill Pyramid Winery, had the major hand in making the 2014 vintage for Monte Creek. 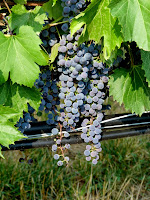 He has recognized that the hybrids are performing differently (and arguably better) in the sunbathed terroir than in . “With the longer growing season and the warmer weather here, we get great ripeness,” he has found. (Photo: Frontenac Gris)

The winery is not relying entirely on grapes that thrive at . The inaugural release includes a Cabernet Merlot from grapes purchased in the Okanagan.

“We are working with a few different vineyards,” Monte Creek general manager Erik Fisher said in an interview this fall. “This year we are identifying where we can get the best quality fruit. We are looking at a five year plus option with a grower in the where we can get a consistent supply of Cabernet Sauvignon and Merlot and grow our production levels. The ownership group is also wide open to purchasing some land down there as well.”

Monte Creek Hands Up White 2013 ($14.99). This is a blend of  59% Frontenac Blanc, 29% Viognier and . Ripening these varieties clear was no issue: the alcohol is 15%. It is noticeable, but not unpleasantly so, in the rich tangerine, caramel and nutty flavours on the full palate. The aromas are fruity, with honeyed notes of melon, citrus and apricot. 87.

Monte Creek Frontenac Gris 2013 ($15.99). The Frontenac Gris grapes thrived in the heat of a summer, ripening to almost 30 brix by the time they were picked on October 4. The winery took the hint and made a delicious late harvest wine with 25.6 grams of residual sugar. The wine has a lovely light gold hue with floral and honey aromas. On the palate, there are flavours of ripe apple and cantaloupe. The sugar is superbly balanced so that the finish has just a lingering sweetness. 89.

Monte Creek Gewürztraminer 2013 ($17.99). The wine begins with aromas of grapefruit and herbs, leading to flavours of citrus and grapefruit rind, with a backbone of minerals. Rich on the palate, the wine is dry on the finish. 89.

Monte Creek Riesling 2013 ($18.99). This wine reflects the style that winemaker Eric von Krosigk has adopted with Riesling: low alcohol (9.8%) with just a touch of residual sweetness that rests nicely on the mid-palate. The classic mineral backbone and the hint of petrol is beginning to develop amid the lemon and lime aromas and flavours. 90.

Monte Creek Hands Up Red 2013 ($15.99). This is a blend of 49% Frontenac Noir, 20% , 10% Croix, 8% Cabernet Sauvignon, 8% Merlot and 5% Savrevois. Dark in colour, the wine is intensely aromatic (cherries, blackberries). On the palate, there are flavours of blackberry and cherry. The winery notes describe this as medium-bodied. However, the long ripe tannins give it a full, lingering finish. 88.

Monte Creek Foch 2013 ($19.99). Dark in color, the wine begins with aromas of raspberry and cherry with a touch of graphite. On the palate, it is a rich, plumy wine with overtones of cherry and blackberry. The finish has the classic smoke and dark chocolate note of the varietal. 89.

Monte Creek Cabernet Merlot 2013 ($19.99). This is a blend of Merlot and Cabernet Sauvignon (the winery has not provided a breakdown on how much of each). Dark ruby in colour, it has appealing jammy aromas, leading to flavours currants and black cherry with dark chocolate and tobacco on the finish, along with a touch of cedar. This is a delicious wine. 90.

Posted by JohnSchreiner at Goodgrog at 4:06 PM