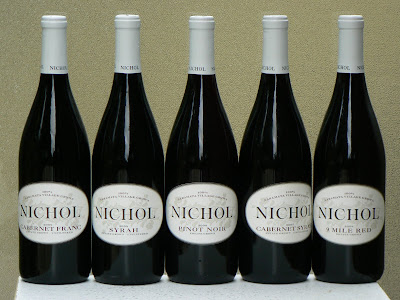 Naramata is one of the strongest place names, if not the strongest, in Okanagan wine but its use on wine labels is still in a grey area.

The regulators recently stopped Poplar Grove Winery from using Naramata Bench on its labels. Apparently, that is not yet an approved geographic indicator.

However, the new releases from Nichol Vineyards all proclaim “Naramata Village Grown” on the labels. Presumably, that can be defended because the vineyards supplying Nichol are within the boundaries of Naramata Village.

Who knows? It might even get its own appellation one day. One can find appellations elsewhere in the wine world that are even smaller. For example, the tiny but historic Portuguese appellation of Carcevelos has been reduced by Lisbon’s urban sprawl to one vineyard.

Judging from the latest reds released by Nichol, an apparent terroir effect does give the wines a unity of style. With the exception of the Syrah, where varietal expression dominates, the reds show similar bright fruit tones. Perhaps that is also the result of the seven grams per litre of acidity left in most of the reds, ensuring that the wines are lively.

The current releases also include a Gewürztraminer 2008 ($16.90), a wine with an intense concentration of flavours of grapefruit rind, goose berry and spice. The wine is finished dry in a slightly austere Alsace style, making this an excellent food wine. 88.

The Nichol Syrah 2008 ($29.90) must be singled out for its historic position among Okanagan Syrah. The founders and former owners of this winery, Alex and Kathleen Nichol, were the first in the Okanagan to plant Syrah, in 1991 or 1992. Other wineries took note after the winery’s spectacular 1994 Syrah was released. Since then, the variety has become the fourth most widely planted red in British Columbia. In good years, Syrah wines are among the best from the Okanagan or Similkameen wineries.

In 2008, Ross Hackworth, the current owner of Nichol Vineyards, made 470 cases of Syrah. A wine with a fine, deep colour, it begins with aromas of plums and spices. On the palate, there are flavours of plum and black cherry, leather and earth, delicatessen meats and pepper on the finish. It is a bold and satisfying red. 91.

Nichol Cabernet Franc 2008 ($26.90) is another of this winery’s signature varieties. The style is pleasantly rustic, quite fitting for this brambly varietal (the winery’s food pairing includes short ribs). The wine has aromas and flavours of black cherry and raspberry framed with oak and tannin, with dark chocolate on the finish. The winery made 260 cases. 88.

In the 2007 vintage, Ross blended 60% Cabernet Franc and 40% Syrah to make 578 cases of Cabernet Syrah 2008 ($28.90). It is a good blend, with the Cabernet contributing the bright cherry and blackberry aromas and flavours while the Syrah brings plum, leather and black pepper to the party. 89.

The other important red varietal in this vineyard is Pinot Noir; Nichol grows two clones, making for complexity in the wine. Some 565 cases were produced in 2008. The Nichol Pinot Noir 2008 ($26.90) is charming and medium-bodied, with aromas and flavours of rose petals, strawberry and salmon berry. There is a touch of bitterness on the finish, suggesting that the tannins have not yet evolved into the variety’s silky texture. 86.

New from Nichol is a proprietary red, 9 Mile Red 2008 ($26.90), bearing the original name of Naramata. This 215-case wine is a blend of 57% St. Laurent and 43% Pinot Noir. Alex Nichol used release the St. Laurent on its own, offering only a small volume because so little of the variety is planted there. Putting two varieties that are compatible into a blend means the winery can release a reasonable volume. This is a vivacious wine with aromas of cherries and somewhat tart cherry flavours with a spicy finish. 87.
Posted by JohnSchreiner at Goodgrog at 1:41 PM