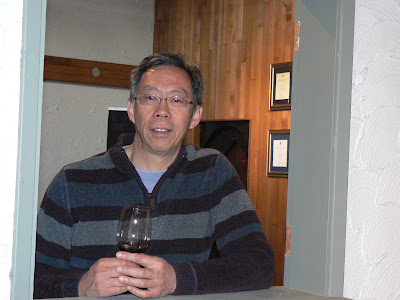 This is Sandhill winemaker Howard Soon’s 30th year as a winemaker in the Okanagan.

His career, which began with Calona Wines in 1980, is remarkable not just for longevity but accomplishment. He began making award-winning wines at Calona but really blossomed when Calona’s parent company launched Sandhill in 1997. To cite just one notable achievement, Sandhill was Canada’s Winery of the Year in the 2009 Canada Wine Awards.

Sandhill makes only single vineyard wines – from its own vineyard on Black Sage Road and from three other vineyards. The object is to produce wines that express the terroir, whether in a large volume release like the Pinot Gris (grown in a Naramata Bench vineyard) or as a handcrafted “Small Lots” release like Sangiovese.

In the latest releases, Howard has taken that one step further by offering two wines from exceptional single blocks in the vineyard. It is considerable extra work but it is also the way to allow superior blocks to show their special terroir.

These are the current releases:

Sandhill Pinot Gris 2009 King Family Vineyard ($18.99). The winery released 5,150 cases of this wine in April and there is still a good supply in wine stores. This has a string of medals including a recent gold in the B.C. Wine Awards. It is a textbook Pinot Gris with aromas and flavours of citrus, apples and pears. 89.

Sandhill Chardonnay 2008 Sandhill Estate Vineyard ($17.99). The price of this compared to the previous wine reflects to moderately flagging popularity of Chardonnay. The assumption is that consumers were driven away by the overoaked Chardonnays from Australia and California in the 1990s. Well, it is time to get over that. Fully 20% of this wine was fermented in stainless steel to preserve the fruit; the rest was barrel-fermented, a technique that integrates the oak subtly in the wine. The result is rich on the palate, with flavours of tangerine, butterscotch and spice. Production: 4,107 cases. 89.

Sandhill Merlot 2008 Sandhill Estate ($19.99). This is an uncomplicated wine – juicy in texture with flavours of blackberries and black currants. Production: 4,750 cases. 88.

Sandhill Cabernet Merlot 2008 Sandhill Estate ($19.99). This is a blend of 43% Cabernet Sauvignon, 39% Merlot, 11% Cabernet Franc and – here’s a surprise twist – 8% Barbera. The result is a very nice wine for the price, medium to full-bodied, with aromas of plum and vanilla and flavours of plums and black currants with some of the Barbera’s earthiness tweaking the complexity. Production: 6,130 cases. 90.

Sandhill Small Lots Single Block Chardonnay 2008 Sandhill Estate Block B11 ($29.99). Only 132 cases of this wine were released. Very elegant, it shows aromas and flavours of tangerine and other citrus fruits, butter and very expensive oak. This is a tour de force and it is sold out. 90.

Sandhill Small Lots Viognier 2009 Osprey Ridge Vineyard ($24.99). The winery made 615 cases of wine. It is a spectacular wine, with dramatic aromas of peaches and orange blossoms, leading to flavours of tropical fruits, from guava to pineapple. There is even a hint of white pepper on the finish. 92.

Sandhill Small Lots Barbera 2007 Sandhill Estate ($29.99). This is the Okanagan’s only Barbera and only 270 cases were released from this vintage. It begins with an array of berry aromas, shows flavours of black cherry and spice on the palate and finishes with notes of sour cherry, red plum and spice. 88.

Sandhill Small Lots Sangiovese 2007 Sandhill Estate ($29.99). This is believed to be the Okanagan’s only Sangiovese; some 430 cases were released. The wine is vibrant and harmonious, with tastes of cherry, red plum and vanilla. It was aged for 20 months in one-year-old French oak barrels, an effective way of giving the wine an elegant texture. 90.

Sandhill Small Lots Cabernet Sauvignon-Syrah 2007 Sandhill Estate ($29.99). This is a blend of equal parts of Cabernet Sauvignon and Syrah. Part of the winery’s Small Lots Program, just 420 cases were released. There is plum and leather, smoke and cocoa in the aroma, with flavours of berries and chocolate. The tannins are still firm. 88.

Sandhill Small Lots Syrah 2008 Phantom Creek Vineyard ($39.99). The Phantom Creek Vineyard is just across Black Sage Road from the Sandhill Vineyard. It often produces the winery’s showiest Syrah. This 2008 is rich and seductive, with aromas of violets, blackberries and spice. On the palate, it is like drinking a Black Forrest Cake with its layers of chocolate, black cherry and spice. There is a touch of pepper on the lingering finish. Only 166 cases were made. 92.

Sandhill Small Lots One 2007 Phantom Creek Vineyard ($34.99). There are 498 cases of this wine, a blend of 67% Cabernet Sauvignon, 20% Petit Verdot, 10% Malbec and 3% Syrah. The wine begins with alluring sweet and floral aromas – very likely the contribution of the Petit Verdot. It is full-bodied with flavours of currants, spice, tobacco and cedar. 90.

Sandhill Small Lots Two 2007 Sandhill Estate ($34.99). This is a 336-case blend of 43% Cabernet Sauvignon, 43% Merlot and 14% Cabernet Franc. This seems a little fuller on the palate that Sandhill One, perhaps because of the Merlot in the blend. It begins with aromas of red berries, toasty oak and spice. It shows flavours of plums and black currants, with a touch of pepper on the finish. 90.

Sandhill Small Lots Three 2007 Sandhill Estate ($34.99). There are 266 cases of the winery’s version of a Super Tuscan red. It is a blend of 55% Barbera, 36% Sangiovese and 9% Merlot. It is an elegant red, with the earthiness of the Barbera tamed by its partners. It tastes of cherries and spice. 90.

Sandhill Small Lots Single Block Merlot 2007 Sandhill Estate Block C8 ($34.99). Only 119 cases were made of a wine from the C8 block of Merlot in the Sandhill Vineyard, notable for the intensely flavoured grapes it yields. This is a rich and concentrated wine with flavours of plums, black currants, blackberries and chocolate, with spiced red fruit on the lingering finish. 91.
Posted by JohnSchreiner at Goodgrog at 3:29 PM