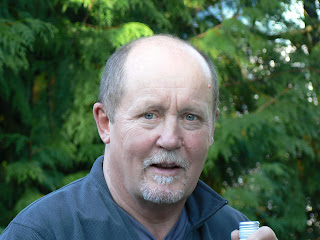 Fans of Averill Creek Vineyard’s Prevost, the winery’s proprietary red blend built around Maréchal Foch, might be alarmed to learn that the exploding bear population in the Cowichan Valley has eaten a significant tonnage of the vineyard’s Foch this year.

He theorizes that bears are coming down the forest slopes of Mount Prevost in search of foraging territory not already claimed by other bears. On one occasion this fall, a female bear simply left one of her two cubs in the vineyard.

Bears have been among several issues this year, one of the most challenging vintages on Vancouver Island since Andy planted the vineyard in 2002. The late spring and the cold September delayed ripening of the grapes. Then rain, or the threat of rain, forced the vintage crew to pick some varieties before rot set in.

As a result, Averill’s Creek’s 2010 Pinot Noir is expected to be lighter than previous vintages. “It’ll be lunchtime Pinot Noir,” Andy says.

The late ripening Merlot, which is tented to kick start it in spring, has gone primarily into rosé, although Andy expected to pull the best bunches from the sorting table to make a few barrels of red. Last week, he was worried about the Pinot Gris but a week of dry and sunny weather since then has been beneficial.

Last week, Andy was thinking of diverting some of his Pinot Noir and Pinot Gris in a base wine for sparkling wine, an excellent idea in a vintage like 2010. It would be Averill Creek’s first sparkling wine.

When all is said and done, I expect that Averill Creek will, as usual, make quite drinkable wines from 2010. “And I have lots of great wine in the winery from 2009,” Andy says. The 2009 vintage was one of the best in the Cowichan Valley that anyone can remember. Averill Creek’s releases of 2009 reds will include both a Reserve Pinot Noir and a Reserve Foch Cabernet.

Foch Cabernet is Andy’s term for the Blattner red that others are calling Cabernet Foch.

The variety is a component of the Prevost blend. The first vintage of Prevost was 2007. That wine is 85% Maréchal Foch, 10% Foch Cabernet and 5% Merlot. The 2008 Prevost, which is just being released, is a similar blend.

The unreleased 2009 Prevost (the wine spends about 11 months in French oak, 25% of it new) is 80% Maréchal Foch, 15% Foch Cabernet and 5% Merlot. Andy describes this as a “big, Saint-Émilion-style Bordeaux wine.”

It remains to be determined whether there will be a 2010 Prevost, chiefly because the vineyard may not have produced enough Merlot to support the blend. Of course, the bears have made inroads on the Maréchal Foch as well. 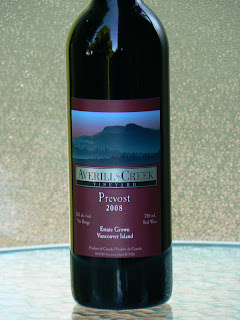 Prevost 2008 ($20) is a deep-hued red. It begins with aromas of cherries and plums and a hint of smokiness. On the palate, there are bright flavours of the fruit – again cherry, perhaps a touch of cranberry. It is a lively, medium-bodied wine with 12% alcohol, with fresh acidity and with soft tannins. 88.
Posted by JohnSchreiner at Goodgrog at 10:46 AM