Calliope Wine is back again 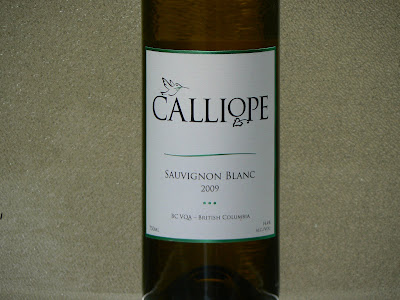 This was the wine label under which Ross and Cherie Mirko sold their Okanagan wines from 2001 until the fall of 2005 when they moved to New Zealand.

The label was purchased by Chris Wyse, the president of Burrowing Owl Estate Winery. He also has a small vineyard in the Similkameen Valley.

He has just released the first Calliope wine since 2005, some 535 cases of Sauvignon Blanc made with grapes from vineyards at Keremeos and Summerland. This means that, unlike Burrowing Owl, the Calliope wines are not limited to estate-grown grapes.

According to the Calliope web site (www.calliopewines.com): “The freedom granted to the winemakers with the Calliope brand offers a chance to break from tradition and to express their creative talents with non-estate grapes vinified in small batches. New frontiers and flavour profiles will be explored, along with interesting blends that highlight the terroir and characteristics of the various grapes used. Oak applications will be minimized and closures may be screw caps or corks with an emphasis on early consumption.”

Here is a bit of history of a brand named for the tiny hummingbird that is indigenous to the Okanagan. The original Calliope was a partnership involving two couples. Both Ross and Cherie are winemakers: he worked for CedarCreek, Blasted Church and then Lang Vineyards; Cherie was the winemaker for St. Hubertus Estate Winery.

Their partners were viticulturist Valerie Tait and businessman Garth Purdy (who eventually turned their interest over to the Mirkos).

Calliope Vintners was a virtual winery launched on a shoestring: no bricks and mortar nor vineyards of its own. The partners sourced grapes from selected vineyards and made the wines initially at Thornhaven Estate Winery and subsequently at Poplar Grove Winery.

“Starting Calliope like this has been good,” Ross told me in 2003. “Financially, it’s been great. We couldn’t be in business otherwise. But now we need to take the training wheels off and get into business quite seriously. If we can’t get into business on our own, we’re not going to continue doing this – making wine in other facilities.” Calliope was making about 1,000 cases a year. 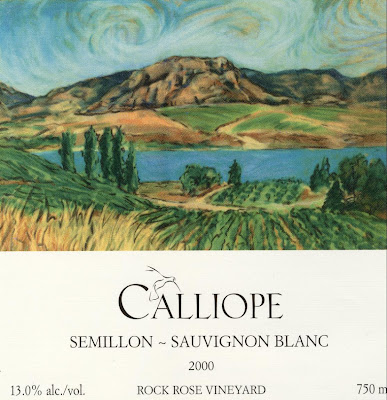 Calliope wines were also sold though the tasting rooms of the other wineries until 2004, when Poplar Grove’s increasing production squeezed Calliope from the wine shop. Calliope continued selling under the Poplar Grove license via the Calliope web site and to the customers that the well-received wines had gained.

“Rumours abound about Calliope no longer being in business but this is not true,” Cherie wrote in June, 2004, in a covering note included with three wine samples send to the media. (Merlot, Cabernet Sauvignon and a Merlot/Cabernet blend, all from 2002). “We have three fabulous reds currently available and are actively sourcing fruit for this coming harvest. There will be some restructuring of how we do business over the next year but other than that, our passion to create excellent Okanagan wines is unabated and our goals & philosophy remain the same.”

Both Ross and Cherie have family ties in New Zealand. With wine industry opportunities available for them there, they decided to wrap up Calliope in 2005. They sold the brand to the Wyse family and moved to New Zealand.

Brands have rarely changed hands in the Okanagan. However, Calliope had established a good name for itself, with absolutely no baggage. As well, the Wyse family’s interest in birds is well known.

The debut Calliope Sauvignon Blanc 2009 ($16.99)is widely available in private wine shops (listed on the Calliope web site). This complex white begins with herbal and citrus aromas. On the palate, there are flavours of lime and pear with good minerality. There is a very subtle hint of oak (the wine spent two months in barrel). The flavour profile is emboldened by the wine’s 14.4% alcohol, no doubt a reflection of the ripeness of the Similkameen fruit. This is nicely balanced by the bright acidity of the Summerland fruit (90).

The 2010 Calliope Sauvignon Blanc is already in tank.
Posted by JohnSchreiner at Goodgrog at 12:01 PM

Cheers - it is quite lovely.