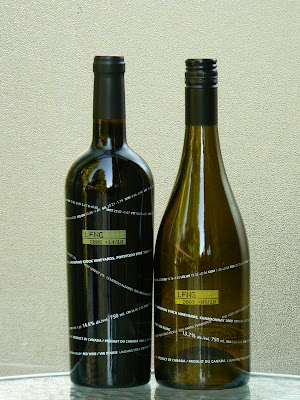 The latest two releases from Laughing Stock Vineyards have come with the announcement that the winery is launching a wine club.

This is another clever marketing device from this well-regard Naramata Bench winery. Given the swelling number of wineries in British Columbia, every winery has to sell a bit harder, even producers as accomplished at Laughing Stock.

They have dipped into the same well for their club. It is called the Preferred Share Wine Club. There are two levels of membership: Series A Preferred and Series B Preferred. There is no fee to join other than committing to order wine regularly.

If you follow the investment business, you know that Series A Preferreds always rank ahead of Series B, with more benefits. Likewise with the Laughing Stock wine club.

The A members order wine by the case. They get free delivery and are first in line to order new releases, including releases of the so-called Small Cap limited production wines. There are other perks as well, including invitations to events in the winery and free tastings.

The B members are those who sign up for three shipments a year, each of six bottles of specially selected wines. They are also first in line for new releases. They pay for shipping. They also get invited to winery events and free tastings.

Other wineries operate similar clubs. The attraction of any of these clubs is the convenience of being on the list to buy for your favourite wines once you have figured out what you want to collect.

Laughing Stock Portfolio is one of those reds that should be collected by anyone serious about building a cellar of British Columbia wines. The winery encourages this by publishing a vintage chart on its web site and by offering advice on the likely cellar life of its wines.

Portfolio is a Bordeaux blend. The first vintage was 2003. Only 500 cases were made, so there are not many cellars that still have some. The winery advises drinking it up by 2012. A customer review on the web site basically confirms that.

Early each year, about eight months before the wine is released, the winery offers Portfolio at a discount of about $5 a bottle to customers who pre-order by the case and pay in advance. This is called selling futures. The big Bordeaux houses do it all the time.

Surprisingly, only a handful of Okanagan wineries do it. To be sure, a winery needs to have a track record of consistent quality before customers will spend three or four hundred dollars on wines they have not tasted. Laughing Stock has acquired such a track record.

The latest release is Portfolio 2008 ($40) and it just won a gold medal at the B.C. Wine Awards. The winery made 2,050 cases. The wine is 53% Merlot, 24% Cabernet Sauvignon, 12% Cabernet Franc, 9% Malbec and 2% Petit Verdot. The grapes were picked between October 14 and October 28 in what proved to be a very good vintage. As usual, the ticker tape around each bottle shows trading values of some equities at that period. Figuring out the stock symbols is part of the fun of drinking this wine. The wine spent 19 months in French oak, 40% of which was new and the rest was one-year-old.

This is a big, satisfying wine with 14.6% alcohol, hardly noticeable amid all this concentrated fruit flavours. It is approachable already but has the structure to age for 10 years. I tasted my bottle over two days, a way of accelerating the aging. It showed superbly on the second day – and it was already very good on the first: spicy red berries and vanilla on the nose, flavours of plum and black cherries and ripe tannins that make the wine rich on the palate. 91-92.

The winery has also released 740 cases of its Chardonnay 2009 ($26). In a time when a growing number of producers are releasing cocktail party Chardonnays (aka unoaked Chardonnay), this is a Chardonnay made as it should be. Laughing Stock’s use of oak hits the fine balance where the oak notes are the harmony behind the melody of the fruit.

This wine was fermented in puncheons, which are twice the size of standard wine barrels. These impart less oak flavour (although the oak always integrates better with the fruit in barrel fermented wine as opposed to merely barrel-aged wine). This wine has hints of toast and almonds on the nose and has rich flavours of tangerines and butterscotch. There is enough acidity to give the wine a refreshing finish. 88-90.
Posted by JohnSchreiner at Goodgrog at 1:32 PM