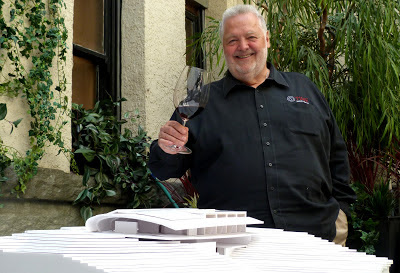 
Designed by architect Nick Buvanda – whose previous credits include wineries for Black Hills and Terravista – will be a dramatic white structure, partially set in a vineyard gully but with elegantly curved upper stories overlooking vineyards and the south .


“It will be an iconic building that will be visible from Highway 97 [across the valley],” Harry says.

This graceful architecture is far cry from the architecture of Sumac Ridge, which grew incrementally from what had been the clubhouse for a golf course. Although the winery’s expansions always reflected the Tudor style favoured by Summerland, one wag once compared it to a Motel 8.


No one will ever disparage Harry’s elegant new winery.


Harry expects that construction will begin this year and the winery, with a capacity of at least 30,000 cases, will be ready for the 2014 crush. The winery is set on a on what is now called the Sundial Vineyard. That is the half of the former vineyard – crucially the half fronting onto the road – that Harry kept when Vincor (now Constellation Brands) bought Sumac Ridge in 2000.


Constellation continued to buy grapes from Harry until the grape supply contract ended several years ago. Constellation owns the Black Sage Road Vineyard name and farms the back half of the original 115 acres which was all planted to varietals in 1993.


Harry no longer has any involvement with either Sumac Ridge or Constellation, freeing him up to launch what is going to be a family winery if, as seems probable, his son Darren and his daughter Christa-Lee join Time.


Harry now will have two labels. His McWatters label, which began with a 2007 Red Meritage and later included a Chardonnay, will be produced at the Time winery. It will always remain a small brand.


However, Time has also launched its own label, initially with three wines: a Chardonnay, a White Meritage and a Red Meritage.


Meritage is a term that denotes wines made from only grape varietals. The term was created in when the wine industry there began phasing out place names on its labels. Harry negotiated the right to use it in and Sumac Ridge made the first Meritage in in the 1993 vintage.


Sumac Ridge has recently discontinued producing either a white or a red Meritage, in part because Constellation Brands thought the term is too closely associated with Harry McWatters. That has given Harry the opportunity to launch Meritage wines at Time.


The Time portfolio will clearly be expanded in future vintages to include single varietals, among them Cabernet Franc, Syrah and Carmenère. Harry has just planted 2,750 vines of Carmenère, a late ripening red that has been championed in .


Here are notes on Time’s first three wines, done in a temporary onsite winery in what was a former machine shop. The wines will be available in VQA stores and select private wine stores.

Time Meritage White 2012 ($25 for 275 cases).This is 79% Sauvignon Blanc and 21% Sémillon, a fairly traditional blend that mirrors the many award-winning white Meritage wines made by Sumac Ridge over the years. This wine is rich on the palate, with aromas and flavours of tangerine and mango. 90.

Time Chardonnay 2011 ($27.99 for 440 cases). This wine was fairly recently bottled and is not entirely over bottle shock. Since this is not your summertime unoaked Chardonnay, you would be well advised to lay it down until the fall when the toasty and citrus aromas will have come together. On the palate, there are flavours citrus, apple and pineapple. 88-90.

Time Meritage Red  2011 ($29.99 for 625 cases). This is 60% Merlot, 25% Cabernet Sauvignon and 15% Cabernet Franc. Red fruit aromas explode from the glass, leading to bright and vibrant flavours of blackberry, lingonberry, black cherries and red liquorice. The long ripe tannins mean this wine is already drinking well. This is a wine in search of barbecued lamb chops. 90-91

Posted by JohnSchreiner at Goodgrog at 9:13 PM