On curb appeal of the labels alone, the new Bonamici Cellars should be a great success.

The label, designed by Hired Guns Creative of Nanaimo, celebrates the friendship by depicting two individuals floating along in the barrel-like gondola under two balloons. An added touch is the capsule which repeats the balloon motif.

“The label is a metaphor for two friends on the journey of building a great wine company,” Mario says. “It is an adventure for the two of us.”

This is the most charming new wine label from an Okanagan winery in some time. The charm triggered a spontaneous smile when I first saw it. And I kept smiling when I tasted the two wines, which are just now being released in some private wine stores and restaurants.

Don’t go looking for the winery at the above address. That is the address of an existing winery where Philip and Mario will make Bonamici wines for several years before opening a winery of their own. The website is expected to be live shortly.

Philip and Mario have several things in common in addition to a shared passion for wine. Both are sons of immigrant families and both are alumni of Andrew Peller Ltd.

Mario, who was born in 1957 in northern , was just 12 when he started helping his immigrant Italian father crush grapes for the family’s wine. Philip was born in Vancouver in 1969, the son of immigrants from . “We had family celebrations but they never encouraged kids to drink,” Philip remembers. “I was 12 or 13 when my first sip of alcohol, Baby Duck, was at a Christmas party.”

It seems that was enough to get Philip interested. After getting degrees in microbiology and food engineering, he was offered jobs at a pharmaceutical firm and a company that produced gourmet salads but, having been a good amateur beer maker while in college, he took a job with a manufacturer of beer kits “because it was in line with my hobby.”

Subsequently, Andrew Peller Ltd. bought this company along with a wine kit company. Philip was then promoted to Peller’s winery in Port Moody in 2000. When the winery closed five years later, he moved to the Okanagan to become a consulting winemaker.

He now has an impressive list of clients. They include Dirty Laundry Vineyard, Noble Ridge Vineyard & Winery, Gold Hill Winery, Adega on 45th Estate Winery and Cassini Cellars. He has never paraded those names, leaving it to his clients to have the accolades when the wines win awards, as happens often.

“I like to be anonymous,” Phil says. “I like the wines and my clients’ efforts to speak for themselves. It’s not about me. That also helps showcase the valley and the talents and the people. It is not about me. It is about the valley.”

Mario spent about 20 years in food and soft drinks sales before joining Peller in 1995 as general manager of Wine Experts, as the kit company was called. He and Philip, who reported to him, became close friends. Mario left Peller in 2009. Deciding to stay in the wine business, he proposed Bonamici to Philip. “He is a great winemaker,” Mario says. “I focussed on sales and marketing for my entire career. I thought this might be an opportunity for us to get together and build something great.”

Philip’s experience as a consultant enables him to identify the vineyards and growers needed to make wines at Bonamici.

“I have known the growers long enough that they are able to work with me,” he says. “They have seen the quality I have done; and the insistence I have placed on them to get the quality I need for Bonamici. They are more than willing. They share the same values as Mario and I do.”

Those values include an approach to contracts that charmingly quaint. “No, there are no contracts yet,” Philip says. “I am old-fashioned. A handshake and your word is still as good as a contract and I will not break that.”

Mario was ready to launch in 2011 but Philip advised waiting for a better vintage, which came along last fall. They have released a pair of blends from 2012 and have a big red in barrel for release next year, along with another 2013 white.

“We have a three year plan” Philip says. “This is our first year of it. If everything goes well, it could accelerate to two years. But our plan is to have our own facility in three to five years.” 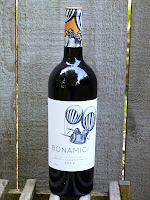 Bonamici Merlot Cabernet Franc 2012 ($28 for 480 cases). This is a bold red, beginning with aromas that are brambly, gamey and even a touch smoky (likely from the barrel). There are flavours of blackberry, raspberry, spice, chocolate and vanilla. The vibrantly youthful personality can be enjoyed now but the wine really deserves to be cellared for a year or two. 90. 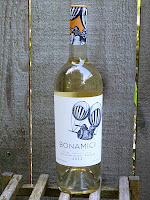 Bonamici Sauvignon Blanc Viognier 2012 ($23.50 for 480 cases). This is a complex aromatic white beginning with aromas of herbs, grass, spice and citrus. The lees aging has added to the texture. On the palate, there are flavours of citrus and apricot with a lingering dry finish of spice and herbs. The oak is very subtle. 90.
Posted by JohnSchreiner at Goodgrog at 1:52 PM