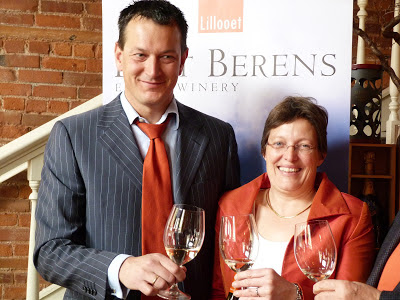 Rolf de Bruin and Heleen Pannekoek took a risk in 2009 when they planted 20 acres of vines just outside Lillooet for their Fort Berens Estate Winery.

Lillooet is a totally new viticultural area for . The experience that others have had growing grapes was minimal and on a hobby scale. De Bruin and Pannekoek, recent immigrants from , had their resources on the line.

Happily, that vineyard has begun to prove itself. Last year, in its second year of production, it produced 48 tons of grapes. This year, with vine growth already three weeks ahead of last year, Rolf expects between 65 and 70 tons of grapes.

“The vineyard is looking better than ever,” Rolf says. One reason, in additional to vine maturity, is that Rolf this year has employed an experienced vineyard manager, Terry Hammond, who had previously worked at Road 13 and Mission Hill.

Rolf has already begun to think about planting another 20 acres, although he will hold off as long as he can to make sure that has absorbed the lessons from the current vineyard.

In 2012, the winery made about 4,000 cases of wine from its own grapes and from purchased grapes. For example, Rolf buys Cabernet Sauvignon from the Okanagan for the winery’s Meritage because he did not plant that late ripening variety at Lillooet.

This year’s vintage should produce at least 5,000 cases. Rolf needs it all since has been selling out its wines each year.

The anticipated rise in production has triggered the decision to move the bulk of the winemaking to Okanagan Crush Pad’s Summerland facility in 2013. Aside from limited production in Lillooet each year, has been making its wines since 2009 at the Township 7 winery just outside . has now outgrown the capacity of Township 7.

The move to OCP also gives access to the winemaking team at OCP. James Cambridge, who made the 2012 vintage for , recently moved to Backyard Vineyards in .

“We are sad he has left,” Rolf says. “He was phenomenal in making our 2012 vintage. The 2012 Chardonnay [not yet released] is probably the best I have tasted from all our vintages.”

is also moving ahead in planning a major winery for its Lillooet site. Subject to funding, Rolf would like to start construction this year and have the facility ready for the 2014 crush.

Riesling 2012 ($18). This wine is made entirely with grapes grown at the winery’s Lillooet vineyard. On the back label, the winery suggests this is a “study” in Lillooet’s terroir. I think it may be early to define terroir from a young vineyard but this is certainly a well grown Riesling. It begins with a fragrant and appealing aroma of lime and flint. The flavours have good intensity, again with lime and mineral notes and with refreshingly crisp acidity and a dry finish. 90.

Pinot Gris 2012 ($18). This wine is made primarily with grapes grown in Lillooet. It begins with appealing citrus and cantaloupe aromas, leading to flavours of citrus and apple. Juicy on the palate, this is a solid example of a varietal that is a big favourite with so many consumers. 88.

23 Camels White 2012 ($17). There is a story behind the label. In 1862 a Lillooet resident named John Callbreath purchased 23 camels for freight hauling during the gold rush. It was a fiasco. The camels spooked both horses and mules and, according to one account, were just turned loose. This wine, however, is a tasty blend of Pinot Gris, Chardonnay and Riesling. It begins with aromas of pears, peaches and bananas. On the rich palate, there are flavours of pear and ripe apple with a slight nutty note on the finish. 89.

White Gold Reserve 2011 ($25). This is the winery’s reserve Chardonnay, made with grapes from Harry McWatters’s Sundial Vineyard on . The wine was aged nine months in French oak. There is oak, but not excessively so, in the aroma, along with buttery tangerine notes. The hints of butter, citrus and ripe apple come through on the moderately rich palate. The wine has a crisp finish. 89.

Pinot Noir Rosé 2012 ($18). This wine is made from grapes grown at the winery’s Lillooet vineyard. It begins with an appealing rose petal pink hue and a fruity aroma of strawberry, pomegranate and a hint of banana. On the palate, the wine has lively flavours of strawberries, raspberries and huckleberries. With its crisp, dry finish, this wine takes your mind to the fine rosé wines of . From Lillooet? Who would have guessed?  90.

Posted by JohnSchreiner at Goodgrog at 1:52 PM

Thanks John for taking the time to sample our wines and sharing your feedback.