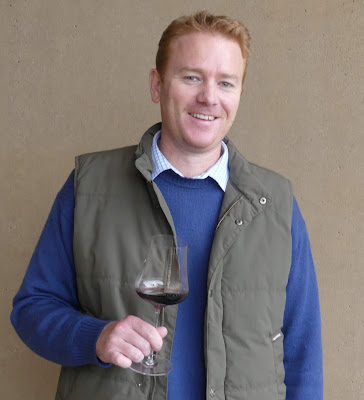 There has been no formal announcement even though he arrived in the Okanagan in August. It seems with everything else on its plate, the winery decided to sit on the announcement until the Vancouver International Wine Festival in February.

“I found Ben through contacts in Australia,” Darryl says. “It took me a year to convince him to come.” He succeeded after flying Ben and his wife to the Okanagan. Here, Ben was swept away by the Okanagan’s beauty, the winemaking opportunities and the passion of Mission Hill’s owner, Anthony von Mandl.

“To me, it is endless opportunity that is untapped,” Ben says in an interview. “There is a fair element of personal challenge to come and put the place on the map. It is about the wine. You never find a region where you have two regions in one. You have the classic Bordeaux varieties in the south and then you have the Burgundian varieties in the north.”

As well, the Bryants “have a young family and we want to expose them to international places. They lived in Asia with us. Canada is a country that is very similar to Australia in terms of societal values.”

The 2018 vintage in the Okanagan got him off on the right foot. “Super impressed,” Ben says. “It was such a mild growing season that everything was able to ripen naturally. The Cabernet Sauvignon is an example: there is no green, there is no herbaceousness. There is a leafiness. Everything has amazingly fresh acid structure. There is a brightness and a purity to the fruit. It is the perfect vintage to start.”

Darryl draws a parallel between Ben and John Simes, who is now retired. When Mission Hill recruited John in 1992, he was already the senior winemaker with New Zealand’s largest winery. Ben, who is about to turn 40, has risen rapidly through the winemaking ranks in Australia and had become the chief winemaker in Australia for Pernod Ricard Group.

He does not come from a winegrowing family. “We were originally a farming family,” Ben says. “I left school and sort of fell into wine because I liked the agricultural side of it. I was offered a job and never left. I was in Mudgee at the time, working in the cellar. At the end of vintage, I was offered a job. I thought it was too good and I never left.”

Ben was profiled in a 2017 wine article by Wine Australia:

“Ben grew up on a farm close to Mudgee, one of Australia’s most exciting cool climate wine regions. From a young age, whenever Ben wasn’t at school or working on the family farm, he was working in one of the local vineyards pruning, picking or whatever other seasonal work needed to be done. At first, he did it for extra cash to spend after school but soon a passion for working the land emerged. Rather than heading to university straight from school, Ben got work as a cellar hand for a vintage at Poet’s Corner in Mudgee.”

Then he enrolled in the wine science program at Charles Sturt University, where he graduated in 2005. He had joined Orlando Wines (a predecessor to Pernod Ricard) where he became the chief winemaker at Wyndham Estate in 2010, moving on to a senior marketing role in 2013.

That same year, Pernod Ricard sent him to Hong Kong for an 18-month stint as a brand development manager. He returned to Australia in the fall of 2014 as chief winemaker for the Pernod Ricard group, including Jacob’s Creek.

In 2015, Huon Hooke, a leading Australian wine writer, characterized Ben in these words: Huon Hooke in 2015: “There’s something about Ben Bryant that reminds me of his predecessor at Jacob’s Creek, the great Philip Laffer. The new chief winemaker has something of Laffer’s demeanour, a no-nonsense, let’s-get-on-with-it kind of approach. Serious but calm; precise in his language; thoughtful but quick in his responses.”

It is clear from that background that Mission Hill has landed a chief winemaker with both extensive technical experience as well as business experience.


Posted by JohnSchreiner at Goodgrog at 9:23 AM