Intrigue's "I Do" when the polls closed 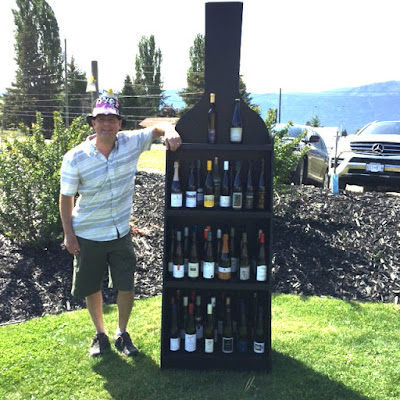 Being among the 70% of Canadians who wanted a change in the recent election,
I went looking in the cellar for a bottle of bubble to toast the outcome.

By a remarkable coincidence, my eye fell on Intrigue Winery’s 2014 I Do, a rosé sparkling wine meant more for weddings than for an election night divorce.

The coincidence is that the winery is in the riding of Okanagan Lake Country. The incoming Member of Parliament, Stephen Fuhr, is the first Liberal elected there since, well, since the glacier retreated from the .

So here is a toast to Mr. Fuhr in the hope that, four years hence, we still will be savouring a good glass and not just a hangover.

As it happens, I have been working my way slowly through Intrigue’s wines during an extremely busy summer which got in the way of writing up the wines earlier. I Do was the only remaining wine to taste. Some of the wines may now be sold out, although in most instances, Intrigue produces good volumes.

Intrigue, which is at in , is a winery established in  2009 by two couples: (also a winemaker at Gray Monk Estate Winery) his wife, Jillian; and partners Ross and Geri Davis. Ross owns a data centre and Geri is the controller at Gray Monk.

Roger, who was born in in 1965, started his career in wine in 1995 when he volunteered with Tinhorn Creek in the 1995 crush. They hired him, promoting him through the vineyards and cellars and through courses at the . In 1998, Roger took over as winemaker at Pinot Reach Cellars, a winery that became in 2004. In 2005 he moved to Gray Monk to make the red and sparkling wines.

Roger’s first independent label was Focus Wines, concentrating on Riesling, the variety he believes is well suited to the north Okanagan. He made the first Focus Riesling in 2002 but the venture stalled in 2003 when smoke from the forest fires saturated vineyards and ruined the grapes. The dream was reborn after Roger and Jillian found Ross and Geri to be kindred souls.

In the 2010 vintage, Roger reintroduced a Focus Riesling in a portfolio of Intrigue wines that includes crisp whites, solid Merlots and a sparkling wine.

Roger’s legendary affection for Riesling was recognized earlier this year. He celebrated his 50th birthday with a gift of 50 Rieslings from national and international producers.

Here are notes on this year’s releases from Intrigue:

Intrigue “I Do” 2014 ($19.90 for 850 cases). This wine is based on Riesling with a touch of Merlot for colour and added fruitiness. The pink hue and the active bubbles contribute to the festive appeal of this wine. The bubbles also give it a creamy texture. The wine has aromas and flavours of cherry and strawberry, with just a trace of sweetness on the fruity finish. 90.

Intrigue Gewürztraminer 2014 ($16.90 for 482 cases). The wine begins with aromas of spice and grapefruit, with flavours of grapefruit, grapefruit rind and lychee. The finish is slight off-dry. 88.

Intrigue Pinot Gris 2014 ($16.90 for 850 cases). This wine presents in the glass with an appealing light bronze tinge, indicating the winemaker left the juice in contact with the skins for a brief time. That also adds flavour. This is a delicious white with aromas of apples, citrus and honeysuckle. On the palate, there are flavours of pineapple, strawberry, nectarine and pear. The texture is generous but the finish is crisply refreshing. 91.

Intrigue Chardonnay 2014 ($16.90 for 207 cases). This fruity Chardonnay begins with aromas of citrus, apple and honeydew. On the palate, there are flavours of green apple and lime with a very subtle hint of butterscotch from the light oak in the wine. 90.

Intrigue Riesling 2014 ($16.90 for 501 cases). The 22 grams of residual sugar here, nicely balanced with bright acidity, lift the fruity aromas and flavours of this wine. It has flavours of lime, tangerine, nectarine and ripe apple. The texture is juicy. 90.

Posted by JohnSchreiner at Goodgrog at 11:53 AM