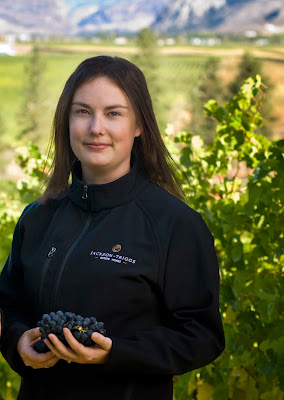 Brooke Blair, the red winemaker at the Jackson-Triggs Okanagan winery since 2004, has returned to her native .

“It's time to get nearer to our family,” she told me last week. “My son is 3 ½ years now, and my husband and I want him to have a closer relationship with everyone there.  And I'm also looking forward to spending more time with them.”

Her husband, Dave Warhurst, was a cellar hand at Culmina Family Estate Winery. “It impacts us, too,” lamented Don Triggs, Culmina’s co-proprietor. He was the chief executive at Vincor International when Brooke was hired in 2004.

Brooke is an accomplished winemaker with an impressive series of rewards from both national and international competitions.

She is going to a job at the Riverland winery of Berri Estates, a major Australian winery. According to Accolade Wines, the group that owns Berri Estates, this is “the largest single winery and distillery complex in the southern hemisphere and is located in . It produces more Cabernet than the Coonawarra and more than the Barossa and McLaren Vale combined, not to mention more Chardonnay than combined.”

I dug into my files for more background on Brooke. Here is an excerpt from an interview with her in 2007.

Q. Where and when were you born?

B. A place called in 1978. [45 minutes south of Coonawarra.] I went to and studied agriculture science majoring in enology. It was a four-year degree. In my fourth year, I had to do a placement in a winery. I did mine at Hollick Wines in Coonawarra.  At the end of my placement, they asked me to come back and work there once I had completed my final year.  They created an assistant winemaker position for me and I stayed there for three years.

Hollick is a family-owned winery. They crushed around about 500, 800 tons; probably larger now. It was a very hands-on position. I learned a lot while I was there.

While I was there, I also did a vintage in . I was there for three months and worked in two or three different regions.

Through a friend of a friend, I heard about the job here, so I sent my résumé over and got this position.

Q. Why did you want to come here?

B. I wanted to do at least another vintage overseas. I was thinking of doing either or . When this opportunity came up, I thought why not apply and get a chance to see a bit more of the world. I had heard nothing but good things about . The wine industry was growing, and still is. From an employment perspective, this was a good place to be.

I thought I could bring some knowledge from but also learn some things over here as well, especially Icewine, which we don’t do in .

Q. Was your family in the wine business?

B. My father used to be a viticulturist before I was born. He has always had an appreciation of wine, particularly red wine. I was always exposed to that.

That said, I initially started studying commerce at university, and decided I could not do that for the rest of my life. I wasn’t too sure what I wanted to do but I had a strong science background. I became friends with someone who was studying viticulture. I thought I would be more interested in that and changed to winemaking the following year, and never looked back.

I have always had an interest in travelling. Winemaking seemed like the perfect thing – you can still travel around, plus get experience. You are not set back in your career. You can keep doing all of those things you want to do and gain experience and knowledge at the same time as seeing other countries.

Q. You are the red winemaker here. Did you specialize in that in your studies?

B. No. Coming over here, I didn’t apply for the red winemaker position. It was just decided by Rob Scapin [chief winemaker at Jackson-Triggs] that they were going to split the roles here. Since I came from Coonawarra, which is well known for red varieties, Rob thought it would be a good idea for me to be in charge of the reds.

Q. Have you had any surprises about the Okanagan?

B. I didn’t know a lot about the region before I came. I do remember flying in from and being amazed at how beautiful it was. I thought I had hit the jackpot in that respect. Mountains and lakes everywhere. I was so well received that it was not difficult for me to settle in.

I have now stayed for three years, which is an indication of how much I am enjoying it here. I bought a house in . I became a permanent resident of at the beginning of the year. I plan on staying for a while. It’s a very up and coming region, just getting worldwide recognition now.

Even since I came over here, the bar has been continually raised. The more wineries that produce good wines, everyone has to do the same. In the past three years I have seen the quality levels increase.

It goes without saying that the quality of Okanagan wine has just continued to improve since that interview. Brooke shares in the credit for that. She will be missed but her native land gets a strong talent back.

Posted by JohnSchreiner at Goodgrog at 10:49 AM