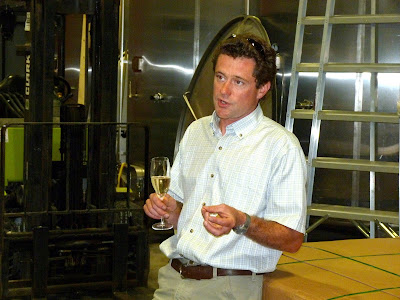 Conversations with the Mavety family, owners of Vineyard & Cellars, always run the gamut from entertaining and enlightening to provocative.

Last fall I was interviewing Matt Mavety, the winemaker, for a project I am doing on collectible wines.

Perhaps mischievously, I asked which of ’s wines could be collected by those assembling verticals.

“Nobody collects Gamay Noir,” I responded.

“Well,” Matt retorted, “they don’t know what they are missing.”

I was reminded of that chat this summer when the winery sent samples of the current Gamay Noir release (as well as the current Pinot Gris).

I have to admit this is a wine, while delicious now, could be cellared as long as 10 years before getting tired.

It is one of the B.C. Gamays that have made me rethink my casual dismissal of the varietal, an attitude engendered years ago when the market was awash with Beaujolais Nouveau. I never understood the appeal of a wine tasting like grape juice, although I once had it paired with a cassoulet. It is a simple wine for country food.

There are also Gamay Noirs suited for Sunday dinner. Such Gamay Noir has long been the best red from Robin Ridge Winery at Keremeos. It is one of the best reds both at Desert Hills winery and Platinum Bench Estate Winery, neighbours on .

There are numerous others as well, ranging in style from Beaujolais and to one or other of the top-rated dozen Beaujolais Cru wines.

I would rate ’s Gamay with a Beaujolais Cru. I can’t tell you which of the ten Cru because I don’t get to taste them often. From memory, I might compare it to Morgon or Juliénas or Moulin-à-Vent. It might be a thought to pick up a few of these from the Liquor Distribution Branch and organize a comparative tasting. The LDB has a good selection.

Those wines – at least some of them – might cellar a bit longer than the wine. suggests its wine will age four to six years, quite adequate for a Gamay. It might very well live a lot longer.

Here are notes on that wine and on the companion wine that arrived for tasting.

Pinot Gris 2014 ($21). The richness, minerality and texture of this wine reflect the fact that the vines are now 28 years old. When the grapes arrived at the winery, Matt pressed whole clusters to capture the purity of the flavours. Sixty percent was fermented in stainless steel, 40% was fermented in French oak (ranging from new to three years old). This portion also aged sur-lie in oak for six months. That helped build more complexity into the wine. It begins with aromas of citrus, pears and apples and that is echoed in the flavours. The fresh acidity gives the wine a crisp finish. 90.

Gamay Noir 2014 ($23). The price, by the way, is competitive with most of the Beaujolais Cru wines. ’s vines range in age from seven to 25 years. This wine was totally fermented with wild yeast, in order “to better express the terroir of our estate,” the winery says. The wine was aged nine months on four-year-old French barrels, a technique for enhancing the texture without imparting noticeable oak in a wine meant, above all, to be fruity.

This wine is both fruity and rich. It has earthy aromas and flavours that include black cherry and blackberry. There is a long spicy finish. 91.

Posted by JohnSchreiner at Goodgrog at 9:32 AM