After selling its wine for two years under the Okanagan Crush Pad license, Bartier Brothers Winery will open its own winery and tasting room next summer on .

It is the culmination of a long journey for Michael Bartier who nurtured the ambition for his own winery not long after becoming a cellar rat at Hawthorne Mountain Vineyards in 1995. 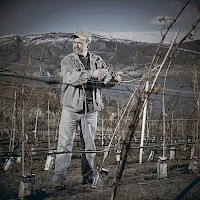 The winery is a partnership with his older brother, Donald (left), an oil industry accountant and land manager in with a three-acre Gewurztraminer vineyard in Summerland.

“Don and I have just received possession of the Cerqueira Vineyard as of Jan. 1, and we'll be building a winery and visitor centre in the coming months,” Michael told me in a recent email. “The address is (formerly known as Road #9), Oliver.  We're right around the corner from Stoneboat, - great neighbours to have.  Our property has frontage on both and , though I think we'll keep our access on Ryegrass.”

Coincidental with this move, Michael has now left Okanagan Crush Pad, where he had been the senior winemaker since 2010. New Zealander Matt Dumayne, who joined OCP two years ago, takes over there. 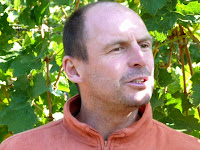 Michael (right) has had his eye on the 15-acre Cerqueira Vineyard for a long time. “I signed up the Cerqueira family to a long term contract when I was with Township 7 [from 2001 through 2003].  The contract wasn't renewed, so I was very happy to take on the contract myself.”

He and his brother negotiated an option to purchase it when Joe Cerqueira retired and they have now exercised that option. The vineyard, planted between 1999 and 2009, has four acres each of Merlot and Chardonnay, 2.4 acres of Cabernet Franc, 2.6 acres of Syrah and two acres of Sémillon.

“The site is very good,” Michael says. “At that latitude, is the divider between the sandy soils (above the road) and the gravel bar (below the road).  The gravel bar, of course, is all young (10,000 year old) glacial till which is very calcium rich, amongst other minerals, - very typical Okanagan subsoils material.  A calcium carbonate crust - limestone - has formed on all the rocks in the subsoils as a result of rainwater washing it through the millennia, and then the calcium wicking back up towards the surface.  All of our rocks are crusted white and the small feeder roots from the vines are ‘hugging’ these rocks.  Every vintage, every batch from this vineyard, the wines are fresh, fruity, and minerally.  I don't care what the minerality naysayers say, that limestone ends up in every glass of our wine!”

That vineyard, along with his brother’s Gewürztraminer block, is allowing him to build a portfolio of about 10 wines. The flagship red is a Merlot-anchored blend called The Goal, made every vintage since 2009.

This spring, the winery is releasing a 2013 Cabernet Franc. “This is a special wine, and one that we will continue with over the long term,” Michael says. “The vines are finally mature enough that I'm happy with the complexity of the wines coming from this block.  There is a lot of limestone in this [Cerqueira] vineyard and the resulting intersection of fruit and minerality that shows in this wine is miraculous.”

He is also rather high on the Sémillon, which is surprising, considering his long and successful love affair with Chardonnay.

“Notwithstanding the two wines I've discussed above, and the fact that it's only $20 per bottle, the Sémillon is, hands down, my favourite wine year after year,” Michael says.  “Again, in this wine, the fruit and minerality is astonishing, its age-ability is remarkable, and it is so refreshing. We plan to tie the branding of our winery very closely to this varietal.”

In one of my earlier books, I wrote about Michael’s affection for Chardonnay (he makes both unoaked and barrel-fermented Chardonnay at Bartier Brothers). The grape became one of his passions in 1998 when he did a vintage in with the Thomas Hardy winery. “I was working with the best maker of white wine in the southern hemisphere,” he says, referring to a winemaker named Tom Newton. “He had a passion for Chardonnay and his excitement passed on to me.” After coming back to the Okanagan, Bartier made award-winning Chardonnay in several cellars.

The son of an accountant, Michael was born in in 1967. He and his brother, who was born in 1968, grew up in Summerland. A lean mountaineer and passionate cyclist, Michael has a degree from the in recreational administration. However, on graduating in 1990, he took a job with a wine marketing agency. “I wasn’t interested in the recreational field,” he told me later. “By the time I realized that, I was too far along in my degree to stop those studies.”

The job with the wine agency provided the opportunity to visit wineries in and in the . “It gave me the interest and the passion for wine,” Bartier recalled. One side of the business that did not appeal to him, however, was selling wine. “I am not a salesperson,” he admits.

He left the agency in 1995 to return to the Okanagan, intending to pick up his original interest in the outdoors. “My dream was to become a professional climbing guide. I came out to the Okanagan to boost my résumé on difficult climbing routes.” Those include the Skaha Bluffs just south of , one of the world’s more popular climbing venues. Ultimately, Michael decided this was definitely not for him. While he considered himself a capable ice climber and mountaineer, he concluded he was “a mediocre rock climber.”

While working on his climbing skills, Michael took a job as a cellar hand at Hawthorne Mountain Vineyards. By the end of a season, he had been promoted to assistant winemaker, leading him to abandon professional climbing. “I realized it was just too dangerous an occupation,” he says. “And I was having too much fun in the wine cellar.”

He applied himself to this new job with gusto, taking extension courses from various American winemaking schools to underpin his career with professional skills. By the time he left (now See Ya Later Ranch) after the 2001 vintage, he was crafting some of the Okanagan’s best Chardonnay wines.

“Like a lot of careers, I got into this quite by accident,” he says. “I feel really privileged. I was at the right place at the right time. I can’t see anyone now coming into the wine industry as wet behind the ears as I was, and rising so fast.”

After , he was consulting winemaker at Stag’s Hollow for the 2002 vintage. At the same time, he was developing Township 7 Okanagan’s property where, once again, he repeated his touch with Chardonnay. In the 2003 Canadian Wine Awards competition, Township 7’s 2002 Chardonnay was judged not only the best Chardonnay but the year’s best Canadian white wine. Two years earlier, the Hawthorne Mountain 2000 Gold Label Chardonnay had been the top Chardonnay in the same competition

While he and his brother get Bartier Brothers established, he will continue to consult with several other wineries. The current plan is to build Bartier Brothers to about 5,000 cases a year.

Posted by JohnSchreiner at Goodgrog at 3:42 PM