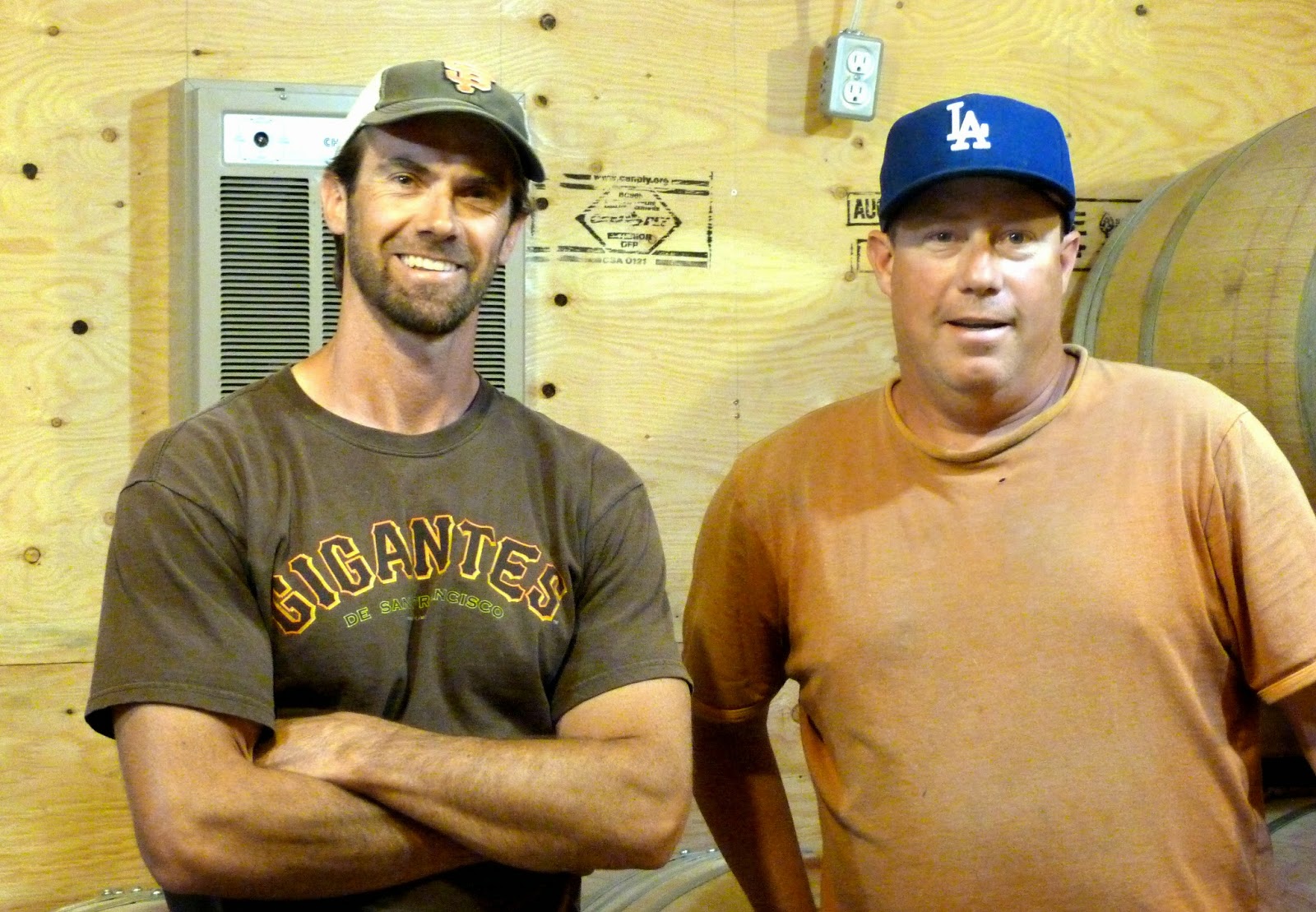 One of the newest of ’s wineries, Stable Door Cellars opened so quietly this spring that you may have missed it.

It is not that owners Dave Tebbutt and Scott Robinson are hiding their lights under a bushel. They only have limited quantities of two white wines and no tasting room in the stable that will be a character winery once renovations are finished.

Tastings are by appointment, and may remain so for a few years as the partners build volume. But the winery is worth a visit even now for its good whites. Besides, you can always talk baseball. The partners are fanatic fans of rival teams who insisted on wearing their ball caps for a photo.

Dave’s love of tasting wines, notably wines, was perhaps the trigger for this vineyard. He is a native with degrees in engineering and accounting who moved to in 1997 with his wife, Susan, a doctor.

In , Dave and one of his best friends “kind of went through the world together, drinking wines,” Dave says. They teamed up to buy the stable and the surrounded property at the edge of . They planted four acres of grapes in 2008 (Merlot, Cabernet Franc, Pinot Noir and Viognier). When the friend got too busy for the vineyard, the Tebbutts acquired his interest. “We’re still good friends,” Dave hastens to add.

To prepare for operating a vineyard, Dave took the viticulture course at in 2005. That’s where he met Scott, who was taking the winery assistant course.

Scott is a native for whom winemaking is a second career. A 1995 graduate of in kinesiology, he was a designer of orthotics, with several patents to his name. “It was very rewarding work but I didn’t see myself doing it forever,” he says.

In 2003, he and his wife, Danielle, took time off to travel in and . “I toured wine regions when I was down there,” he says.  “What really stood out was when we spent time in . It is quite a magical place. I went to some wineries there and I thought this is something I might come back to.”

He already had a good knowledge of wines. While at university, he had also managed a wine store in Delta. “I started going to trade tastings and was responsible for buying wines for the store,” he recalls. “That’s what started my interest in wine.”

He resumed clinical work on orthotics when he and Danielle returned to early in 2004. But Scott now began to look for opportunities in the wine industry. That led to working in the cellar at Township 7 Winery as he was finishing the winery assistant program.  “I really enjoyed that course,” he recalls. “It stimulated my thirst for more schooling.”

After three vintages at Township 7, Scott went to to work the 2007 vintage with the Kim Crawford winery.  The following year, he enrolled in the master’s winemaking program at . When he came back to in the spring of 2009, he immediately landed a winemaking job at the widely admired La Frenz Winery.

His professors at had asked him if he wanted to continue his master’s research to a doctorate. “I said no, I have to go into the real world,” Scott recalls. But in 2013, after four vintages at La Frenz, he decided to return to research.

“I was going back to work on a PhD,” he recounts. “I was already accepted and I was going to work with my supervisor from with whom I had done my master’s.” The plan was to combine that with the teaching he had taken on in the wine program.

“Dave was taking a microbiology course that I was teaching last February,” Scott says. “We just got to talking and that was the launching pad for this idea. I wanted to make a bit of wine – I wanted to make some Riesling somewhere in additional to studying.  Dave wanted to start up this winery and I wanted a place to make wine.”

The winery was incorporated in May, 2013, and Scott put his PhD project on the shelf. “Doing this has brought me back to the reason I began making wine in the first place: small batch winemaking and attention to detail that I just want to focus on; experiment with fermentation regimes; all kinds of things. I have lots of ideas.”

In the 2013 vintage, Stable Door made about 90 cases of Viognier, 180 cases of Riesling and about 300 cases of a Merlot/Cabernet Franc blend (for release in 2015). Plans for a 2013 Pinot Noir were abandoned after those grapes were seriously damaged by that season’s plague of wasps.

The partners don’t intend to stay that small. Dave believes the capacity of the winery is about 5,000 cases. He and Susan have purchased another 10 acres nearby for future planting. Stable Door also has begun to contract grapes from select growers.

The Riesling, for example, is from a Naramata Bench grower who previously had sold to La Frenz. “I am a Riesling guy at heart,” Scott says. “That is my favourite white — just the versatility of it, the styles you can make, the fact that it really reflects site.”

Stable Door Riesling 2013 ($22). The wine appeals with aromas of peach and grapefruit and delivers refreshing flavours of lime and grapefruit. The wine is exquisitely balanced, with enough residual sugar to flesh out the texture and enough acidity to give the wine a crisp finish. 90.

Stable Door Viognier 2013 ($23). This wine begins with floral and white peach aromas, going on to honeyed flavours of apricot, pineapple and apple. The full texture is the result of fermenting half the wine in barrel, with lees stirring. The fresh acidity gives the wine a lively, fruity finish. 90.

Posted by JohnSchreiner at Goodgrog at 3:24 PM