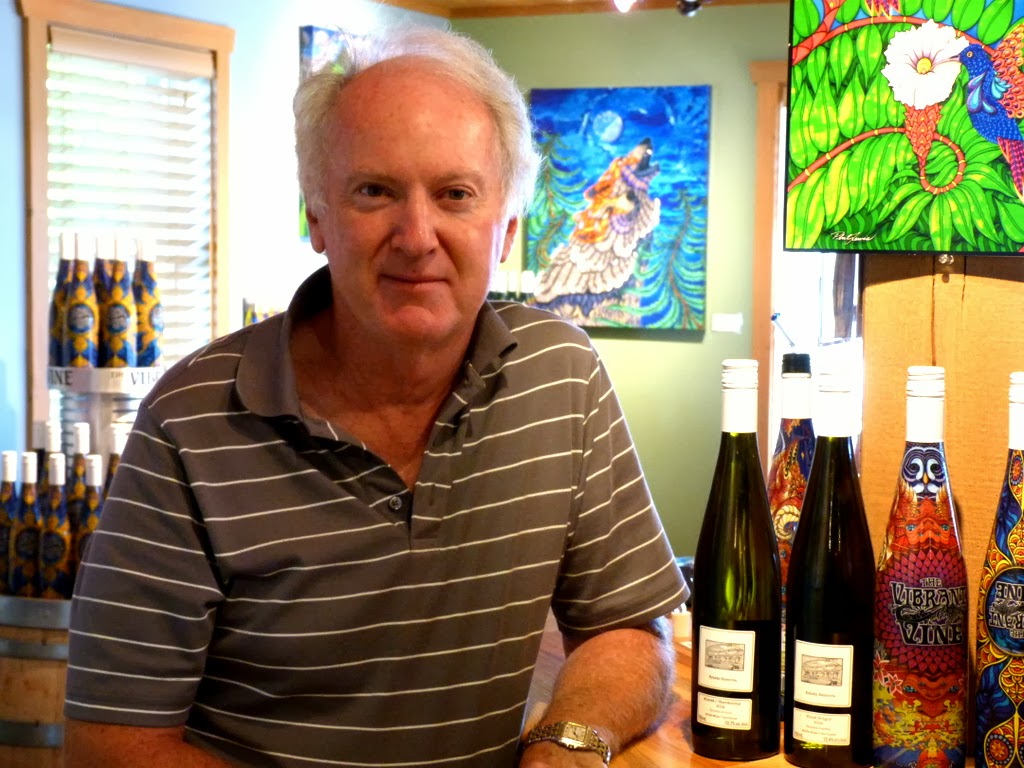 The Vibrant Wine, a winery that rarely enters wine competitions, has just won a platinum award and best in class for white wines at the massive World Beverage Competition in .

Wyn Lewis, who owns the winery with his wife, Marion, is so new to competitions that he had to research the bona fides of the WBC.

Well, it is the real deal. It was launched in 1991. It now gets more than 10,000 beverage entries and the judging is done blind by qualified judges. For The Vibrant Vine, this is a significant achievement.

The irony is that wine was entered inadvertently by TricorBraun, the winery’s bottle supplier. WBC also includes a packaging competition. In 2012, TricorBraun entered a Vibrant Vines package and came away with a silver medal. The bottle company decided to enter again in 2013 and got two bottles each of three different wines from the winery. Whether by chance or design, the wines ended up in both competitions. The result: a bronze medal for the package and a platinum for a white blend called Oops?

A little background will be helpful.

The Lewises, originally from , had long and successful careers in banking in the before retiring. They were en route to in 2003 when they stopped in . They were so taken by the that they stayed, buying an property with an orchard, a big house and a grand view.

They soon switched the orchard to vines and, with son Anthony as winemaker, developed a winery which opened in 2010. Another son, Phil, is the artist whose psychedelic work was used for wine labels.

These are no ordinary art. Both the canvasses for sale in the winery and the art on the bottles are done in a 3-D technique. Every visitor to the winery is loaned a pair of 3-D glasses in order to appreciate the art.

Nor are these ordinary labels. Every label is a shrink-wrap cylinder put on the bottles by hand and then shrunk in place with heat. TricorBraun has been putting the package into competition because it is so seldom used for wine bottles.

When TricorBraun told Wyn that one of his wines had earned the platinum award, they did not know which of the three entered wines it was: the Riesling, the Gewurztraminer or the blend called Oops? It was several days before WBC told Wyn, by which time he was almost ready to issue a press release about the Gewürztraminer. That wine had won a medal in the Finger Lakes Wine Competition in one of the few other times The Vibrant Wine has competed.

He should have guessed it might be Oops? While all other wines here are dry, this blend of five white varieties lead by Riesling and Pinot Gris, was finished off-dry, in the style of a Mosel Riesling. He learned that consumers may talk dry but they often drink sweet.

“It was not my favourite wine,” Wyn says candidly, “but it sold like crazy.” With the residual sugar helping to pop the aromas and the flavours, Oops? outsold the other wines in the tasting room three to one. By late summer, it was sold out.

“We are set to make as much as we can from the 2013 vintage,” says Wyn, who anticipates a rising demand for the wine after the 2012 vintage scored so well at the WBC.

Why is it called Oops? Last year when the winery was preparing the bottles, a staff member inadvertently put the slip covers on upside down. The error was noticed during the run. The staff thought it looked good, this being quite edgy art, and did the entire run that way. When Wyn discovered what had happened, he reacted as one might expect. Then he cleaned up the language and called the wine Oops?

Now he has a winner on his hands.

Posted by JohnSchreiner at Goodgrog at 3:57 PM