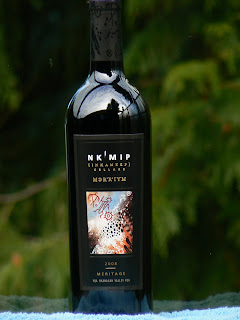 Nk’Mip Cellars has entered the icon wine sweepstakes with the release of its first $50 red wine – with a label name that collectors may find challenging at first.

The wine, a 2008 Meritage, is called MəR’R’IYM. Pronounced mur-eem, it is a word from the dialect spoken by the Osoyoos Indian Band, which runs Nk’Mip in a joint venture with Vincor Canada. The word means marriage – in this case, the marriage of five Bordeaux varietals.

“This is the first time we have had all five Bordeaux varietals available to us,” winemaker Randy Picton says, explaining why Nk’Mip, which opened in 2002, is only now releasing an icon wine. 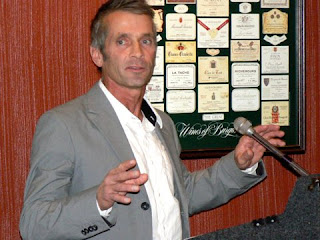 The winery already had a reserve range. Since the 460-member band owns and lives on a large reserve in the southern Okanagan (with some of the region’s best vineyards), it needed another term to identify the premium wines. These are all labeled QwAM QwMT, a phrase that means achieving excellence. The pronunciation shortcut is to refer to these wines either as QQ or Q Squared.

The QQ wines invariably are excellent. The 2007 QQ Meritage ($30), which is 75% Merlot, 15% Cabernet Sauvignon and 10% Cabernet Franc, was a gold-medal winner and best of class this year at the Los Angeles International Wine & Spirits Competition – among its other awards.

The object with MəR’R’IYM is to take advantage of the great selection of grapes to move the quality up another notch. The wine is a markedly different blend. It is 54% Cabernet Sauvignon, 35% Merlot, 7% Malbec and 2% each of Cabernet Franc and Petit Verdot.

Picton and his cellar team skimmed the cream from the 350 barrels of red wine in the Nk’Mip cellar to come up with a 20-barrel blend, or about 500 cases.

From the winery brochure, here is how he explains his blending approach. The wine is “largely Cabernet Sauvignon based; we added Merlot for mid-palate sweetness, Malbec and Cabernet Franc for their aromatic contributions and Petit Verdot for increased structure and complexity.”

At a coming-out party for the wine in November in Vancouver, Randy added: “It’s not meant to be a blockbuster. It is about elegance and harmony.”

To get the best from this wine in its youth, I was careful to decant it and let it breathe. The wine has the structure to age well, to develop further complexity and to be drinking very well on its 10th birthday. It begins with aromas of spice, cassis and plum. On the palate, there are flavours of plum and cassis, with a note of chocolate on the finish. The long ripe tannins and the 18 months of barrel-aging contribute to the cedar character on the finish often found in Bordeaux reds. 92.

Collectors of iconic British Columbia reds will need to add MəR’R’IYM to the list.
Posted by JohnSchreiner at Goodgrog at 4:38 PM