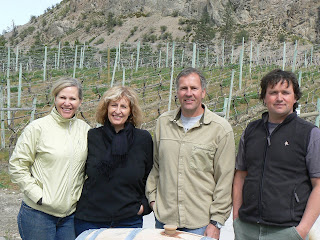 It is a safe bet that JAK Meyer, who runs Meyer Family Vineyards with his sisters and his wife, Janice Stevens, , would be an engaging guest at a dinner party.

It is a judgment based on the winery’s choices of individuals that it has honoured each vintage since 2006 with what is called a “Tribute” Chardonnay. The idea is to recognize Western Canadians who have outstanding achievements in their fields. The winery also donates $5,000 to a cause or foundation associated with the honouree.

The 2006 Tribute Chardonnay (the winery’s first vintage) was dedicated to Emily Carr while the 2007 honoured Bill Reid. These are two of the finest artists ever to emerge from British Columbia. One assumes that you could have a pretty good conversation about art with JAK.

The winery shifted cultural gears in 2008 with a Tribute Chardonnay dedicated to hockey great Steve Yzerman, who directed the $5,000 donation go to the Cranbrook Minor Hockey League where he began his career.

In an another cultural lurch, the 2009 Tribute Chardonnay honours the late Kenny McLean, a great rodeo rider who once lived at an Okanagan Falls ranch, not far from Meyer Family’s winery.

The McLean tribute tells us that JAK Meyer is a man of eclectic interests. It also tells us that he has found roots in Okanagan Falls two years after buying a vineyard there, just east of the community. Meyer Family Vineyards started in 2006 with a vineyard on Naramata Road. That is still the source of some of its top Chardonnays, including the 2009 Tribute, but the winery’s tasting room and processing facility now are both at Okanagan Falls.

Kenny McLean was born in 1939 in Penticton and grew up on an Okanagan Falls ranch. According to notes supplied by the winery, he started breaking colts when he was 12 and was competing in rodeos at 17. He turned professional in 1959. He won 14 major Canadian championships in this sport, more than any other Canadian rodeo rider. In 1962 he was the World Saddle Bronc champion. In 2002, while riding at a rodeo, McLean suffered a fatal heart attack. There is now a life-size bronze statue of him, on a horse, at Okanagan Falls.

The $5,000 donation from the winery supports a B.C. high school scholarship for young rodeo riders.

Even though McLean is in several rodeo halls of fame, he is probably not well known outside of rodeo circles. His profile is certainly a little higher now with the non-rodeo crowd, thanks to the 292 cases of Chardonnay that Meyer has released.

And those who collect the Meyer Chardonnays will be eager to see where JAK’s catholic tastes take him with the 2010 Tribute.

The winery was launched initially as a Chardonnay specialist. In the last several years it has also added Pinot Noir, partly at the urging of winemaker Chris Carson, the New Zealand-trained Canadian who joined Meyer in 2008. As well, the Okanagan Falls vineyard that was purchased that fall included producing Pinot Noir (and more has been planted). 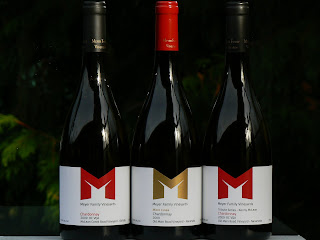 The winery recently has released its 2009 wines. Here are my notes.

Micro Cuvee Chardonnay 2009 ($64.90). This wine is made with grapes grown in the winery’s 1.6-hectare Old Main Road Vineyard on the Naramata Bench. The wine is a selection of the best three barrels of Chardonnay from that vintage, which means there are 72 cases in total. It is a very elegant wine, with toast and oak aromas along with citrus aromas. The winery used very good French oak and the winemaker has not hidden it but has used it to lift the fruit and mineral flavours. Given the wine’s texture and the bright acidity, this is a wine, like a good white Burgundy, that should be cellared a few years, enabling its complexity to bloom. 91.

Tribute Series Chardonnay 2009 - Kenny Mclean ($35). This is the other 11 or 12 barrels of Old Main Road Chardonnay. I would not have wanted to job of picking the best three barrels when all are this elegant. This is a carefully crafted wine, fermented very cool for about three months in stainless steel before being transferred into French oak barrels (33% new) to finish fermentation and to spend another 11 months quietly on the lees. The result is a wine with toast and oak on the nose and with bright and focussed citrus flavours. I would recommend cellaring this as well for a few years. 90.

McLean Creek Chardonnay 2009 ($35). The McLean Creek vineyard at Okanagan Falls includes a 1.2 hectare block of Chardonnay. The winemaking is similar to the other two Chardonnays, except that this wine received only partial malolactic fermentation since the grapes started with less natural acidity than those grown on the Naramata Bench. This wine has attractive aromas and flavours of toast, butter and lime. It has the vibrancy of Chablis but with more weight. The winery produced 261 cases. 88. 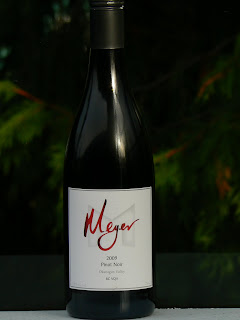 Meyer Okanagan Valley Pinot Noir 2009 ($25). The winery has released 620 cases of this wine, having sourced grapes from several growers. The winemaker’s gentle handling of the grapes and the wine results in a wine with the classic silky texture of Pinot Noir. It has flavours of cherry and raspberry that, with time in the glass, evolved to rich flavours of black cherry and mocha. 88-90.
Posted by JohnSchreiner at Goodgrog at 11:42 AM