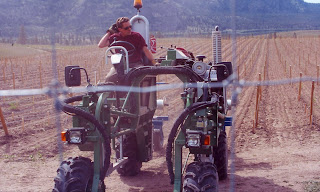 The area under vineyard in British Columbia has more than doubled in a decade, reaching 9,066 acres (3,626 hectares) this year.

Even though the pace of expansion is slowing due to a lack of suitable vineyard land, forecasts suggest that another 1,500 acres (607 hectares) will be planted during the next two years.

The numbers suggest a very dynamic wine industry but also one with marketing issues in the future. By 2012, when these plantings are mature, the industry will be able to produce about 23 million litres of wine, double the production of 2004.

Until recently, most British Columbia wineries sold everything they made with ease, primarily within the province. In the future, it may not be so easy to sell all that wine at home.

Here is the rising vineyard acreage

Some 84.3% of that acreage is in the Okanagan Valley, with 6.4% in the Similkameen Valley, 7.3% on the coast or Vancouver Island. The remaining two percent are in what the census calls “other” areas, including the Kootenays, Kamloops and the Fraser Canyon.

At least 100 acres have been planted in these other areas, as new or would-be vintners in British Columbia have begun to push the envelope. With global warming reducing winter’s severity and with hardier grape varieties, the prospect of wineries in locales such as Kamloops is becoming real.

The census also tracks the grape varieties being planted. Red varieties account for 51% of the plantings.

These are the five most widely planted reds

These are the five most widely planted whites


The most significant changes in those planting areas are:

* Syrah plantings have more than doubled since 2004, to jump ahead of Cabernet Franc.

* Pinot Gris has jumped ahead of Chardonnay for the first time since these vineyard censuses were begun.


Posted by JohnSchreiner at Goodgrog at 10:50 AM